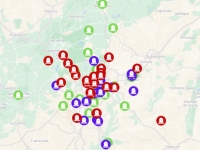 COVID-19 mortality rates at eldercare homes in Madrid managed by private companies DomusVi and Orpea were close to double that of eldercare homes in public hands during the first wave of the pandemic, as illustrated in a new map published by CorpWatch.

CorpWatch used data provided by Manuel Rico, the investigations director of infoLibre, a Spanish investigative journalism website, to visualize data on COVID-19 mortality rates and the percentage of residents who died without receiving hospital treatment in the Community of Madrid. The map was published as part of our collaboration with the European Network of Corporate Observatories (ENCO) to show the impact of the privatization of healthcare across Europe over the last few decades.

For example: At Orpea Mirasierra, not one of the residents who died made it to hospital. (More details on these tragedies can be seen in this CorpWatch article.) Sixty residents of DomusVi Mirasierra died in the 12 week period and 58 residents of Orpea Villanueva de la Cañada died in the same time span.

At Orpea's Alcobendas facility 31 of the 38 residents (ie 82 percent) who died never made it to hospital. “We are aware that there has been a much higher number of deaths than could be considered acceptable given its characteristics,” a group of 60 family members who sued Orpea Alcobendas after they counted at least 17 deaths at the eldercare home, wrote in their lawsuit. “There were days when I went to see my father and found him peed on,” Esther Ortega, one of the claimants, told infoLibre.

The DomusVi's Mirasierra facility asked relatives for written authorization to let residents rejected by the hospital die at the residence, according to leaked documents obtained by infoLibre. “The director informs us that there was an accumulation of deceased in the center,” the letter said.

Fernando Collado, told El Confidencial, a digital newspaper, that his father, Faustino, died at the Nuestra Señora del Rosario residence run by DomusVi in Madrid, soon after his room-mate did. "Was he isolated? Did they test him? Did they intubate him?" Collad asked. "It's like being in a cesspool where you don't know what's true and what's not.”

Our map also includes other data, drawn from mainstream Spanish news websites, as well as from infoLibre, such as the fines that care homes had accumulated prior to the pandemic together with details of lawsuits against these care homes, often brought by family members of residents who saw their loved ones be mistreated.

In several cases, company workers collaborated with family members to expose egregious violations, noting that the pressure of work from management caused them to make mistakes. “You didn't have time to attend to all the requests,” Alejandro Salado, a former employee of Orpea El Escorial, told infoLibre. "(For example) food was given in a hurry, sometimes causing choking."

DomusVi, one of Europe’s largest private eldercare home providers, has been the target of countless protests, investigations and lawsuits by workers as well as relatives of residents for issues ranging from understaffing to neglect of patients to union repression. All this culminated during the COVID-19 pandemic, particularly in the region of Galicia, Spain, where family members, workers and unions have been organizing protests against the healthcare giant in the streets, as well as by filing a class action lawsuit in the courts.

“DomusVi steals, deceives, treats residents as if they were numbers, it is only a business... and the government looks the other way,” Sonia Jalda, a member of the Galician Residential Workers Collective (TREGA) was quoted as saying in the Galician daily news site Nòs Diário. She was taking part at a protest against the company's Vigo care home in Galicia, where the workers’ collective were organizing to demand that the government reverse the privatization of care homes and hire more staff.

A new CorpWatch map visually represents this growing movement across Spain. It depicts over 21 protests that have taken place against the company since 2019. The map contains information on who the organizers of the protest were such as unions to associations of relatives of the victims, as well as what their demands are: which range from an increase in salaries to better living conditions for residents, and a reversal of privatization.

“We demand public, dignified and quality residences. It is clear that this system does not work, the lack of staff has been astonishing,” Jalda was quoted as saying in Nòs Diário. “People with dependencies are all the same, even if they have different pathologies. Residents and workers need to live in the residences safely, and with the lack of staff on which DomusVi operates, this is impossible.”