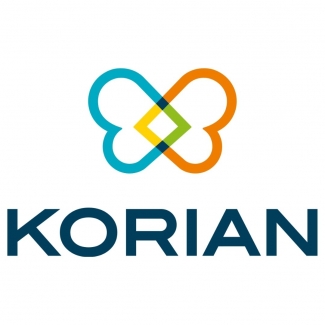 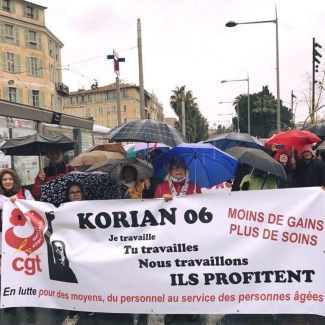 Korian is a private medical care company that was founded by Charles Ruggieri, a steel and real estate tycoon in 2003. It owns over 1,000 elder care and nursing homes, in Belgium, France, Germany, Italy, the Netherlands and Spain. The company has come under the spotlight for a number of deaths that have taken place at its facilities. In early 2017, there was a flu outbreak at a Korian-owned nursing home in Lyon, France, that resulted in the deaths of 13 people and infected 70 percent of the residents. In April 2019, five residents of another Korian-owned nursing home in Lherm, France, died from food poisoning, and 20 further were hospitalized. And in 2020, nearly a third of residents at a Korian nursing home north of Cannes died from coronavirus.

During the coronavirus pandemic, Korian came under fire for the poor working conditions for its staff. Several major strikes have been organized at Korian-owned nursing homes by French unions. A L’Humanité investigation revealed Korian was actively suppressing union activities at its nursing homes throughout the course of the pandemic. It was also criticized for not doing enough to stop the spread of the virus amongst its residents, being the subject of legal investigations, accusing the company of manslaughter. In March 2022, a documentary on nursing homes in France alleged issues of understaffing and rationing of food, with undercover footage showing workers telling an old lady to "pee in her adult diaper" because of a lack of staff to accompany her to the toilets. These issues resulted in a legal case brough by 18 families who are bringing forth 30 complaints against the company, including “manslaughter."

Violation data on Korian is still being gathered at this time.

Published by
L'Humanité
| By
Nadège Dubessay
|

The COVID 19 pandemic made visible the deficiencies in the care sector that EPSU affiliates have been protesting against for years. New research from Investigate Europe

Published by
RFI
| By
Christina Okello
|

French prosecutors are investigating five care homes for health violations after complaints by families about the treatment of elderly residents during the coronavirus outbreak.

Published by
Challenges
| By
Laure Croiset
|

Investigation: do some nursing homes take advantage of our seniors' money? (Article in French)

Published by
RTBF
| By
Anne-Catherine Croufer
|

The other big business with care homes: investment funds and real estate allocate hundreds of millions to buy care homes (Article in Spanish) 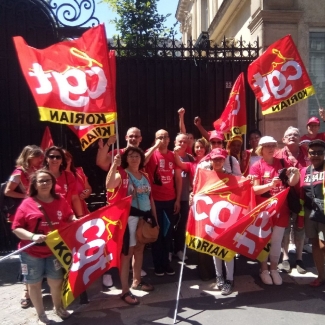 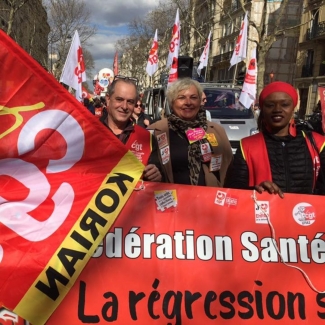 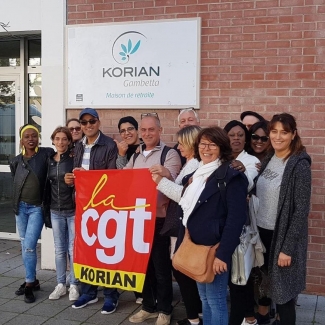 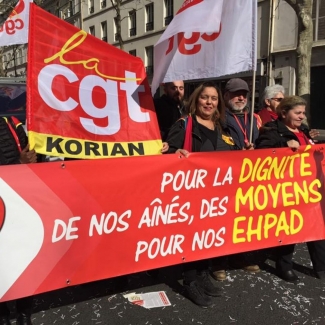 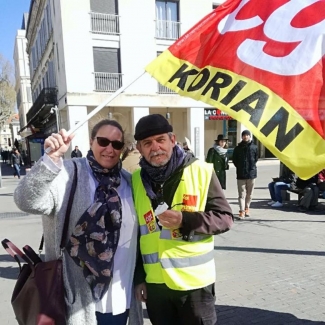 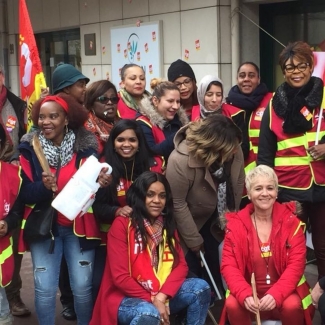 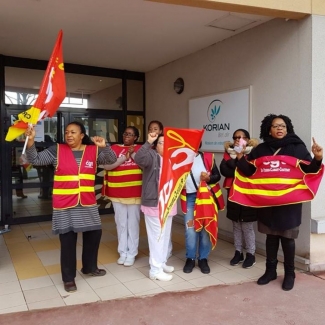 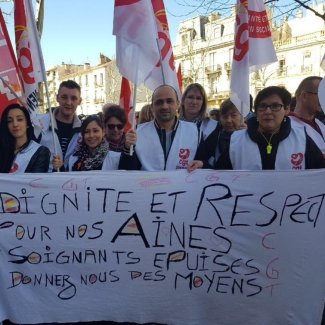 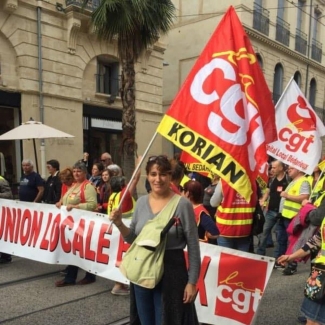 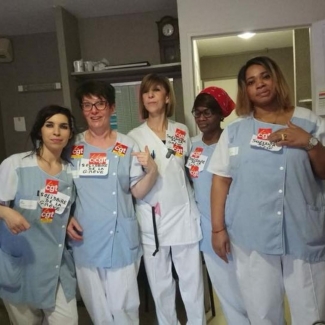 The same is true in France, where Korian and Orpea are the two biggest operators of eldercare homes. Jean-Louis Touraine, vice-president of the French Hospital Federation, told the French Parliament that some 12,000 COVID-19-related deaths could have been avoided had private eldercare homes followed the same rules as public ones.

This is the case in two private nursing homes, that of Parc au Coteau and within the Korian nursing home in Roanne. “We are asking for an increase in wages in alignment with inflation,” says Béatrice Proix, CFDT local representative at Korian, alongside Alain Wattier.

Those on strike at the La Goélette residence, managed by Korian in Équeurdreville, in the municipality of Cherbourg-en-Cotentin in the Manche department, can no longer take their working conditions.

Tuesday, March 8, following the call of the CGT union, the employees of the nursing home on the Island of Migneaux, managed by the Korian group, demonstrated against the deterioration of working conditions understaffing issues.

The claims against the Korian Reine Mathilde nursing home in Grainville-sur-Odon (Calvados) keep increasing. “It is not the lack of means at the material level, it is rather the lack of staff, explains Florence Marc, nurse and union member at the CGT union.

This Tuesday morning, around fifty caregivers, psychological aides, maintenance workers, facilitators and even cooks gathered near the entrance gate to express their dissatisfaction and fatigue.

After three days of strikes in July, about thirty people demonstrated in front of the eldercare home Korian Bel Air in Clamart (Hauts-de-Seine) to "call out the horrific management" on Monday, November 8.

France: CGT demonstration: "It's scandalous to attack an activist"

Thirty CGT activists gathered on Thursday to denounce a complaint by the Korian group against a union representative.

France: Employees of the Korian clinic continue their strike action

Employees of the Korian Valdonne clinic, who started an ongoing strike action last Tuesday, decided this Wednesday to strike again for an hour.

Staff from the retirement homes La Roseraie in Dreux and Villa Evora in Chartres, both belonging to the Korian group, organized a strike on Friday, October 16.

There were a dozen workers in front of the Clos du Mûrier nursing home in Fondettes, northwest of Tours, this Friday afternoon. The employees of this establishment, which belongs to the Korian group, demonstrated to denounce the wage freeze and the reduction of the 13th month bonus.

Employees of a major group of French nursing homes on Monday took part in protests across France to call for better pay amid the coronavirus crisis.

France: Poissy: sued by her employer Korian... for a t-shirt caricaturing the company logo

A middle finger instead of Korian's intertwined hearts logo, with the company's slogan "care at heart" replaced with "money at heart". This is what Nadia Boutmar, a 64-year-old caregiver from L'Île de Migneaux de Poissy (Yvelines), wore on her T-shirt on March 8 during the National Day of Struggle in Care Homes.

France: Senlis: A former employee of a Korian nursing home sentenced for violence against residents

A 50-year-old woman was sentenced Thursday by the court of Senlis (Oise) to three months of probation for violence committed against vulnerable elderly people.

France: Béarn: "Our mother was abandoned", a family files a complaint against the Korian Group

Her condition deteriorated in just 15 days. The children of Lucette, 91, have filed a complaint against the Korian Group, which they accuse of having let their mother waste away in a convalescent home near Pau...

France: Thirty complaints filed against the nursing homes of the Korian Group: “When he left, his condition had worsened”

Germany: Public prosecutor investigates: Care scandal in home? 88-year-old is said to have been severely abused

Was there abuse in a nursing home in Seubersdorf in the Neumarkt district? The public prosecutor's office in Nuremberg-Fürth is investigating serious allegations. The facility concerned has already been searched.

France: Two employees of the Korian nursing home in Bruay are going to the Labor Court

Two unionized employees of the Korian nursing home in Bruay-sur-l'Escaut, consider themselves victims of unfair dismissals, in one case including abuse. The Labor Court will reveal its decision on the case in November.

The journalist was hired for three days in a Korian nursing home as a caregiver, while having neither diploma nor experience. With an undercover camera, she filmed the exhausting daily life of overworked employees, forced to advise an old lady to "wee in her adult diaper" because there was a lack of staff to accompany her to the toilets.

France: Marpent: an internal investigation within a Korian nursing home, after the death of a resident

Roland Étienne, resident of the Samara nursing home (managed by the Korian Group) died on April 24 after contracting Covid-19. Since then, his family has never ceased to want to shed light on the circumstances of his death.

The two preliminary investigations by the Nanterre public prosecutor's office for manslaughter, endangering the lives of others and failure to assist a person in danger concern the "Bel-Air" establishment in Clamart.

France: The Korian group again targeted by an investigation in one of its nursing homes

How could Jeanine Dezaille, 94, resident of a nursing home near Rouen, die after being seriously burned by the water in her shower?

France: After the complaint against the Korian L'Ossau clinic in Gan, staff testify to mistreatment

Workers beging to speak out after the lawyer Sarah Saldmann announced a lawsuit against Korian over abuse. Two of the thirty complaints target the L'Ossau clinic in Gan, which belongs to the Korian Group.

Germany: Allegations against Frankfurt retirement home: "They let my mother dry up with her eyes wide open"

Bad conditions are said to have prevailed in Frankfurt's Bettinahof retirement home - on the one hand for the staff who are desperately looking for help, on the other hand for the residents. One of them died as a result, their children are sure.

France: The Good News: The Korian group will not be able to silence the CGT Union

The employees of the Korian group and their CGT union have just won a great legal victory. The Paris court acquitted carer Odette Wandji,who works at the Bel Air nursing home, in Clamart (Hauts-de-Seine), against whom the management of the establishment had lodged a complaint.

France: At Korian nursing home, 4.50 euros per day for meals for residents, says the CGT Union

What the public knows of today, he has been denouncing for years: "it's institutional abuse, it's the institution that pushes the caregivers, who are in no way abusive and do a remarkable job, to commit these acts".

France: "A working day in Bel-Air is a day in hell": in Clamart, the revolt of nursing home employees

“We won't give up!" This Monday, under the windows of the Bel-Air nursing home of the Korian group, in Clamart (Hauts-de-Seine), the slogans rang out. Thirty people gathered under the banners of the CGT union to demand better working conditions.

Strong demands this Thursday before the Nice courthouse, following the appearance of Albert Papadacci in the Paris court. The union representative was attacked by the Korian group for "complicity in public defamation of an individual", following a report broadcast on France 3 in November.

Employees of several nursing homes of the Korian and DomusVi groups call out union-busting tactics, which have gone as far as dismissals.

France: Deaths in a nursing home: the Korian group under fire from critics and this is not the first time

Insufficient and distraught staff, high prices, seniors left to fend for themselves and rationed... The Korian group, which is posting record profits, has again been singled out since the death of five people in one of its retirement homes, following possible food poisoning.

Korian Workers are organising across borders

Workers and union representatives in the French multinational specialized in elderly care, Korian, met in Brussels, in order to better coordinate their struggles and strategies to secure better pay and conditions for the almost 47,000 workers employed in 4 countries.

France: Flu: towards the end of the epidemic at nursing home which left 13 dead

Asked to react to testimonies from relatives of residents denouncing recurring dysfunctions and poor hygiene conditions in the establishment, the spokesperson admitted that "the families' concern is completely understandable", without responding directly to their questions.

The operator of retirement homes and clinics Korian has confirmed that it has completed the acquisition of Ita Salud Mental, after obtaining the necessary regulatory and competition law authorizations.

The number one European retirement home operator Korian will launch a capital increase of 400 million euros to afford the psychiatric operator Inicea and strengthen its activities dedicated to mental health, the company announced on Thursday.

CorpWatch is still gathering procurement data for Korian at this time.