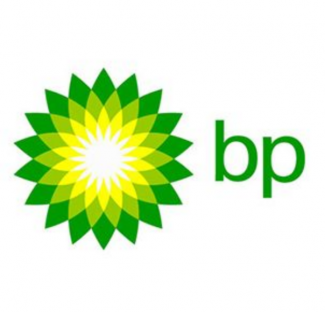 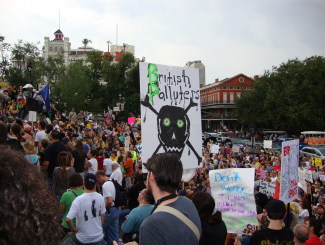 In the early 2000s, BP attempted to re-brand itself as climate-friendly oil company by suggesting that its initials stood for “Beyond Petroleum.” This initiative was quietly dropped after the Texas city explosions. It has routinely been fined for pollution in Prudhoe Bay, Alaska; Huntington Beach, California; the Delaware River; Lima, Ohio; Grangemouth, Scotland, just to name a few locations.

Individual Records & Summaries
Click here for details of BP's violations.
Information in this section is drawn from the Violation Tracker database produced by the Corporate Research Project of Good Jobs First in Washington DC. It is the most comprehensive source of data on business violations of laws and regulations in the United States. For specific examples of misconduct, please click on the links. 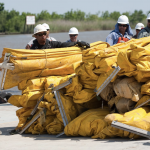 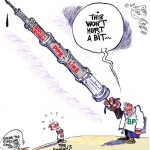 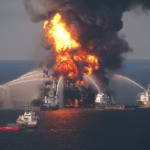 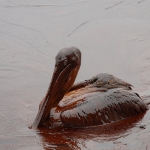 Published by
ProPublica
| By
Ryan Knutson
|

TEXAS CITY, TEXAS -- Ever since the Deepwater Horizon exploded in the Gulf of Mexico, David Senko has been tallying the similarities between what he calls "my blast" in 2005 and this new BP disaster.

BP has decided not to go ahead with its controversial plans to drill for oil in the commonwealth marine reserve in the Great Australian Bight.

When you start working on a film, you make your plans. First, there’s the script development, sharpening the screenplay, making sure that characters resonate and pop and are as colourful as they can be.

About 95 tonnes of oil have been leaked into the North Sea from a BP platform, the company has said.

BP’s plans to drill for oil in the pristine marine reserve of the Great Australian Bight will come under fresh scrutiny, as senators seek to reinstate a

Environmental lawyers have lodged a complaint against a multimillion pound global advertising campaign by BP, which they said was misleading the public with its claims of commitment to a low carbon future.

BP signed a multimillion-dollar contract for work in Iraq with a firm that had been linked to corruption allegations in the country one year previously, the Panama Papers reveal.

The EU abandoned or weakened key proposals for new environmental protections after receiving a letter from a top BP executive which warned of an exodus of the oil industry from Europe if the proposals went ahead.

A federal judge in New Orleans has granted final approval to an estimated $20bn settlement, resolving years of litigation over the 2010 BP oil spill in the Gulf of Mexico.

BP is to end its 26-year sponsorship of the Tate next year.

Bob Dudley, the chief executive of BP, earned nearly $20m last year – at a time when the company ran up the biggest losses in its financial history and axed thousands of jobs.

The What Next? art campaign must tackle sticky questions like BP at Tate | Mel Evans

This week sees the national launch of What Next?, a network of theatres, museums and dance companies calling for public support for the arts.

Published by
By Roger Harrabin
|

Published by
Gregory Meyer and Ed Crooks in New York
|

The weekend before the Lehman Brothers collapse unleashed a financial cyclone, a real one made landfall on the Gulf of Mexico.

Hurricane Ike tore across the Texas coast on September 13 2008, knocking out much of the region’s oil and natural gas production.

Regarding “BP gifts $2 million to city for climate plan,” (A3, July 23): BP’s $2 million grant for the Climate Action Plan may be a step towards healing past 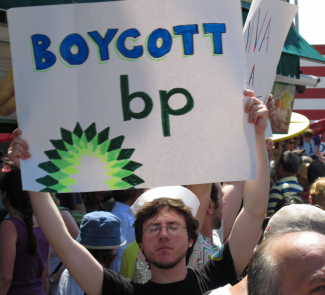 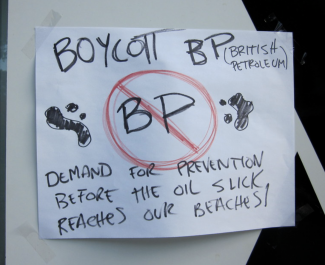 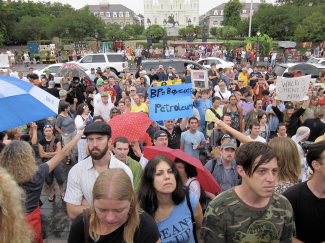 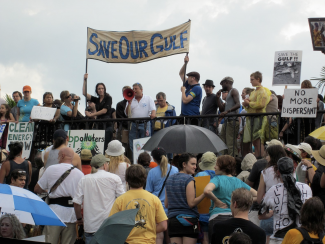 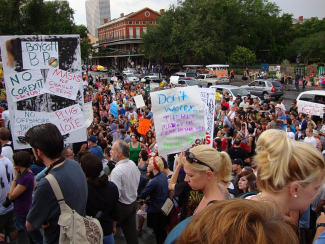 December 27, 1965: Britain’s first ever North Sea oil rig collapsed and killed 13 men during a bitter snowstorm and 20ft-high waves on this day in 1965.

An estimated 6,000 barrels of crude oil spilled into the Pacific on Wednesday night after an oil tanker apparently hit its own anchor, opening a hole in its hull while attempting to moor about two miles off Huntington Beach.

Greenpeace is staging a “socially distanced protest” outside BP’s London headquarters as the energy giant is due to begin its annual general meeting.

Dozens of activists have coated themselves in plaster and are trying to occupy the British Museum overnight in a bid to pressure the institution to cut ties with oil corporation BP.

Climate protesters forced BP to temporarily shut down its London headquarters on Wednesday, the first day in office for the oil and gas company's new CEO Bernard Looney.

Back in July, 2000, British Petroleum launched a high-profile, $200 million public relations ad campaign designed by Ogilvy & Mather to position the company as environmentally-friendly.

A federal board investigation into the 2010 BP oil spill concludes that a last-ditch safety device on the underwater well had multiple failures, wasn't tested properly and still poses a risk for many rigs drilling today.

n March 19, 2015 a big contingent of striking BP refinery workers from Whiting, IN put on a protest rally in front of the multi-billion dollar corporation's Chicago headquarters in the Chicago Mercantile Exchange building. They were from USW Local 7-1, which includes about 1,100 members. They were joined by members from they Chicago Teachers Union.

Subsidy Tracker is a project of Good Jobs First in Washington DC. It is the most comprehensive source of data on state and federal subsidies in the United States. For more details, click on the links.
Click here for details of subsidies received by BP.
Tax Havens

How BP avoids paying any tax in the UK

It’s defenders often claim that it pays large amounts of tax in the UK, so we all benefit from its business activities.

BP contracts with the U.S. Federal Government (via USA SPENDING).