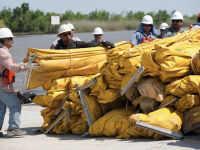 BP, the British oil company, has been accused of attempting to blame "blue collar workers" in order to divert attention from management failures of "gross negligence" over the Deepwater Horizon spill in 2010. The allegations were made by the federal government in a recent legal filing by the U.S. Department of Justice that was initially kept partly secret.

Deepwater Horizon - jointly owned by BP and Andarko Petroleum at the time - was deployed to work on Macondo, a mile-deep underwater well in the Gulf of Mexico. In April 2010 the rig caught fire, exploded, and sank. Over the following 87 days the oil well spewed nearly five million barrels into the ocean 40 miles off the Louisiana coast until the well was successfully capped with cement. Almost 70,000 square miles of water and  over 1,000 miles of coastline were polluted by oil slicks, scientists say. Coral reefs and dolphins in the area continue to show signs of ill health to this day.

In mid-August BP asked U.S. district judge Carl Barbier to to dismiss a pending lawsuit by the federal government that is currently scheduled to be heard in January 2013. Instead, the company asked the judge to approve a $7.8 billion settlement, reached with 125,000 victims of the gulf disaster that includes tourist businesses and fish workers.

The federal government acted swiftly to submit a new federal legal brief to the court in New Orleans on August 31, according to legal experts, in order to convince Barbier to deny the company petition and allow the lawsuit to proceed. In their filing the government lawyers made a forceful case against the oil giant.

"BP's management in London purposefully limited the investigation by excluding any of the systemic management failures that led to the disaster," the lawyers wrote of an internal inquiry conducted by Mark Bly, a BP executive.

"This was a decision designed to ensure that the public and legal lines of accountability would be focused exclusively on blue collar rig workers and other contractor/defendants - but at all cost, not upon BP management and the inexplicable behaviors that coursed through the pages" of the internal BP emails.  "The behavior, words, and actions of these BP executives would not be tolerated in a middling size company manufacturing dry goods for sale in a suburban mall," the government lawyers added.

These sentences were blacked out by the government in deference to a "confidentiality claim" by the company but Barbier ordered them made public.

Certainly individual BP workers are already being prosecuted. In April, federal prosecutors filed the first criminal charges against an individual involved in the accident. Former BP engineer, Kurt Mix, was charged with obstruction of justice for allegedly deleting hundreds of text messages sent between himself and a BP supervisor during the crisis. Mix pleaded not guilty and awaits trial in February 2013.

BP has claimed that management actions in the Deepwater Horizon spill "did not constitute gross negligence or willful misconduct" on part of the company itself.

However, a presidential panel that investigated the accident has found otherwise, calling the catastrophe preventable. The panel determined that the companies involved had taken hazardous and time-saving risks. In December 2010 the Justice Department filed a lawsuit against BP and eight other companies, including Andarko Petroleum and Transocean. Halliburton, a contractor for the well that blew out, was not named in the lawsuit.

Experts say that the new filing shows that the government has become increasingly frustrated with BP's attempts to evade responsibility. Justice Department lawyers took special issue with BP's internal investigation noting that the company omitted from its report several revealing and embarassing emails between BP top officials that "sounded a clarion cry of impending disaster."

"Just as BP attempted to have the public, Congress, and others focus only on what happened on the rig or in the shoreside offices of its contractors, the BP engineers and executives who drafted these and other documents were the people who actually exercised the direct authority and control over nearly every aspect of what ultimately went wrong on the rig on April 20th," the filing's authors wrote.

David Uhlmann, a University of Michigan professor and former environmental crimes prosecutor told Reuters that the new filing  "contains sharper rhetoric and a more indignant tone than the government has used in the past."

"What is most striking," the brief said, "is the utter lack of any semblance of investigation of the systemic management causes deeply implicating the corporate managers and leadership who caused and allowed the rig-based mechanical causes to fester and ultimately explode in a fireball of death, personal injury, economic catastrophe, and environmental devastation."

The Justice Department filing reminded Barbier to rule only on whether the settlement agreement meets legal standards during an upcoming November 8 hearing and cautions against allowing BP to admit evidence or present testimony before the January trial.

The stakes are high. Under the Clean Water Act, violators are fined $1,100 for every barrel of oil spilled. In cases of gross negligence, that fine is increased to $4,300 per barrel. If a federal judge agrees that BP is indeed liable for gross misconduct, the company would have to pay $21 billion more than the $5.5 billion they planned for, according to Reuters.

BP responded to the news agency with a statement noting that it "believes it was not grossly negligent and looks forward to presenting evidence on this issue at trial in January."

"In its filing, the U.S. Government made clear that it does not oppose the settlement reached by BP resolving economic loss and property damage claims stemming from the Deepwater Horizon oil spill. Other issues raised by the Government simply illustrate that disputes about the underlying facts remain," the company said.

The August 31 legal brief also concluded that "BP did not act alone" and blames Transocean for its role in the disaster as well. Both the Justice Department and BP are appealing a ruling made by Barbier that let Transocean off the hook for oil that spilled underwater.

Meanwhile BP told Forbes that it has largely completed clean up from the spill, and the area has mostly recovered. Environmental experts disagree - Robert Haddad, head of the National Oceanic and Atmospheric Administration's assessment and restoration effort, and Doug Inkley, a senior scientist with the National Wildlife Federation, told the Wall Street Journal that the region is still suffering from the spill.

The one business that has fully recovered is the oil industry. Following a six-month federal moratorium on drilling and a two-year lull after the BP explosion, the Wall Street Journal reports that over 4,000 platforms are now pumping oil and gas from 35,000 wells via nearly 30,000 miles of pipelines in the region. BP alone currently has six rigs drilling and is still the largest player operating in the area. Transocean is reportedly negotiating a partnership that would lead to a contract for four ultra-deepwater drillships similar to Deepwater Horizon.

The federal lawsuit is not the only one against BP for managament negligence. Six investment groups that bought shares in BP before and immediately after the catastrophe sued the company in Texas earlier this month stating that they would not have bought shares "had they known the truth," the Daily Telegraph reported.

"BP paid only lip service to ... (safety) reforms, lacked any tools for dealing with oil disasters such as deep-water spills and continued to operate by sacrificing safety for savings," the groups filing suit stated. "BP's reform failures led directly to the April 2010 disaster."