Industry: Agriculture, Beverages & Food
Published by
Special to CorpWatch
| By
Melody Kemp
|
Wilmar of Singapore, the world's biggest global processor and merchandiser of palm oil, has come in for harsh criticism for the environmental and social impact of its Indonesian plantations. The allegations also raise serious questions about the role of WWF and the Round Table on Sustainable Palm Oil. Read More

Industry: Agriculture, Beverages & Food
"I thought I would find freedom and jobs here, I thought the United States was a civilized nation, the highest in the world. I never imagined this kind of thing could happen here." Read More

Industry: Agriculture, Beverages & Food
Published by
Special to CorpWatch
| By
Pratap Chatterjee
|
Mordechai Orian, president of Global Horizons, a Los Angeles-based labor recruiter, was indicted by the U.S. Department of Justice for "engaging in a conspiracy to commit forced labor and document servitude" of some 400 Thai citizens who were brought to work on farms in the U.S. Read More 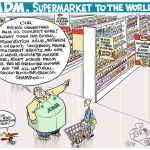 Published by
Christian Science Monitor
| By
David Grant
|
While it doesn't sound (and need not be) nefarious, activist groups worldwide like the Rainforest Action Network argue that the production of palm oil is currently harming rain forests in Southeast Asia, orangutans, and the environment. Read More