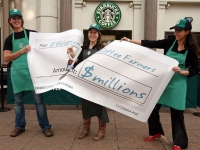 Starbucks, the Seattle-based international coffee chain, has been accused of tax avoidance in the UK. Over a three year period, the company allegedly did not pay a penny in taxes on Â£3 billion in sales from 735 stores in the country.

Starbuck operates 17,650 stores worldwide. Unusually the chain paid out 31 percent in U.S. taxes last year, much higher than the average rate paid out by other corporations of 18.5 percent, according to Citizens for Tax Justice. But in the UK, the company appears to have been much more aggressive on reducing its legally taxable income, regularly reporting losses to the government despite telling shareholders that the company was doing well.

"This apparent contradiction arises from tax avoidance, and sheds light on perfectly legal tactics used by multinationals the world over," writes Tom Bergin of Reuters who broke the story. "To its investors, it sells an espresso - strong and vibrant. The UK taxman gets a watered-down Americano."

For example Reuters reported that John Culver, President of Starbucks' International division, told analysts on a call earlier this year that "we are very pleased with the performance in the UK" while it was reporting a Â£33 million loss to the government for the financial year ending September 2011.

The company has responded to the accusations with a publicity blitz. "I have been very angry in the last week not because there is scrutiny, but because it has been so misrepresented and inaccurately reported," Troy Alstead, the chief financial officer of Starbucks told the Financial Times.

"I look forward to the day when we pay a lot more tax ... we have had a long history, unfortunately and in the early days, of aggressive expansion," adds Alstead. "We did a little bit of a land grab and we made a lot of mistakes."

The company says its costs are higher in the UK than elsewhere. For example, it spends 25 per cent of UK turnover on property costs, compared with nine per cent in the US and 12 per cent in Japan.

But the company also makes a six percent royalty payment to its regional headquarters in the Netherlands which reduced its taxable income. The money was paid out for "operational expertise, store design and intellectual property." Professor Michael McIntyre at the Wayne State University Law School told Reuters that such royalty fees can attract a 39 percent tax rate in the U.S.

This high tax can be avoided by setting up offices in countries like the Netherlands and Switzerland. Starbucks Coffee EMEA BV - the company's European headquarters - had revenues of 73 million euros ($95 million) in 2011 but declared a profit of only 507,000 euros ($659 million) and just 97 employees.

Activists have reacted angrily to this news. "I believe - one day companies like Starbucks will no longer be allowed to avoid tax," Ellie Mae O'Hagan of UK Uncut wrote in the Guardian. "We need to keep talking about tax avoidance, keep emphasising what a black-and-white issue of injustice it is, and keep reminding our MPs (members of parliament) that it is their responsibility to take action."

MPs have raised their voices in the last couple of weeks, challenging David Cameron, the UK prime minister to explain the situation. "This illustrates why we need much greater transparency," said Margaret Hodge, a Labour MP who chairs the parliamentary Public Affairs Committee. "We have no way of knowing whether this was a fair settlement or whether it represents another 'sweetheart deal' for big business."

Starbucks is not the only company to take advantage of the fact that the UK is one of the few wealthy countries that does not have laws against tax avoidance. Her Majesty's Revenue & Customs (HMRC) estimates a total of Â£32 billion was lost to tax avoidance in the last year, up Â£1 billion on the previous year.

eBay, the Internet auction site, and Ikea, the Swedish furniture retailer, have recently come under scrutiny for similar practices. The Sunday Times newspaper followed up the Reuters expose with a similar investigation that showed that eBay paid just Â£1 million in UK taxes on sales of Â£800 million. Instead the company sheltered tax income via Luxembourg and Switzerland in order to avoid paying nearly Â£50 million in taxes in the UK. Ikea also used royalty payments to the Netherlands to cut its tax bill in half.

But Starbucks is considered to be one of the most aggressive in this field. By comparison McDonald's paid out Â£80 million on Â£3.6 billion pounds of UK sales and  Kentucky Fried Chicken paid taxes of Â£36 million on Â£1.1 billion in UK sales. (The three largest restaurant chains in the world measured by market capitalization are McDonald's, Starbucks and Kentucky Fried Chicken respectively)