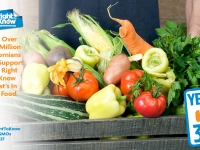 A new study, issued by scientists at the Freeman Spogli institute at Stanford university in California, that suggests that organic food has no medical or health values is deeply flawed, say outraged activists.

Media coverage of the scientific paper that was published in the Annals of Internal Medicine last week was mostly supportive, as is customary for studies
from famous universities. "Organic Food 'Not Any Healthier," wrote a BBC journalist, while the New York Times published an article titled "Stanford Scientists Cast Doubt on Advantages of Organic Meat and Produce."

NGOs immediately questioned the conclusions of
the study. "There was just no way that truly independent scientists with the expertise required to adequately answer such an important question would ignore the vast and growing body of scientific literature pointing to serious health risks from eating foods produced with synthetic chemicals," says Charlotte Vallaeys, food and farm policy director at the Cornucopia Institute Institute, an organic farm policy organization in Wisconsin.

"Make no mistake, the Stanford organics study is a fraud," says Mike Adams of Naturalnews.com and Anthony Gucciardi of Naturalsociety.org. "The mainstream media has fallen for an elaborate scientific hoax that sought to destroy the credibility of organic foods by claiming they are "no healthier" than conventional foods (grown with pesticides and genetically modified organisms)."

Adams and Gucciardi note that Dr. Ingram Olkin, a co-author of the organics study and a professor emeritus in statistics at Stanford, has deep financial ties to Cargill, the agribusiness multinational which sells genetically engineered foods. Olkin also accepted money from the tobacco industry's Council for Tobacco Research, according to letters dating back to 1976.

"I learned, in visiting with Dr. Olkin, that he would like to examine the theoretical structure of the "multivariate logistic risk function." This particular statistical technique has been employed in the analysis of the Framingham study of heart disease," wrote William W. Shinn, a lawyer with Shook Hardy & Bacon who represented the tobacco industry's Committee of Counsel at the time. "He is asking for two years of support at the rate of $6,000 per year ... We believe that a modest effort now may stimulate, a broader interest in such questions especially among theoretical statisticians at Stanford and elsewhere. Dr. Gardner has reviewed and approved the proposal."

"To say that conventional foods are safe is like saying that cigarettes are safe," adds Adams. "Both can be propagandized with fraudulent science funded by corporate donations to universities, and we're seeing the same scientist who helped Big Tobacco now helping Big Biotech in their attempt to defraud the public."

Stanford University has reacted to the controversy in a defensive manner: "This paper was published in a reputable, peer-reviewed journal, and the researchers received no funding for the study from any outside company. We stand by the work and the study authors," the university is quoted as saying in the Los Angeles Times. "Stanford Center for Health Policy (where the study was conducted) has never received research money from Cargill."

One of the reasons that the Stanford study has become a lightning rod is a ballot initiative that California voters will be asked to vote on in November. Proposition 37 will require labeling on raw or processed food "if the food is made from plants or animals with genetic material changed in specified ways" and also "prohibit labeling or advertising such food as 'natural.'"

See "The Devil is in the Details" for a good technical review of the Stanford study, authored by Dr Charles Benbrook, former executive director of the subcommittee of the House Committee on Agriculture in the U.S. Congress, that explains the scientific errors.