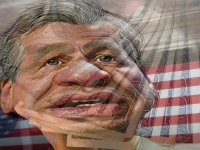 Boaz Weinstein took as much as $2 billion from Jamie Dimon and Bruno Iksil. That is to say a hedge fund named Saba Capital Management in New York bet against the London office of an investment bank named JP Morgan and won. These men - known as "whales" because of the size of their bets in the financial markets - have triggered a major outcry over the lack of regulation of Wall Street, mostly because of the $2 billion loss by JP Morgan, a public company and bank.

"(I)t's not O.K. for banks to take the kinds of risks that are acceptable for individuals, because when banks take on too much risk they put the whole economy in jeopardy - unless they can count on being bailed out," wrote an outraged Paul Krugman, a Nobel Prize winning economist.

Wonderful sentiments, but what about when these banks make huge profits? Are they supporting the economy then? Or are they also taking money from some one else on those occasions?

Certainly hedge funds - a secretive group of financiers - often make a killing, though sometimes they lose their shirts. Much of the money is made in ways that are very hard to understand, but in simple words: by stealing legally from the rich like the investment banks, but also from the working class and the poor. (They don't discriminate)

Here's an extreme example: George Soros, the hedge fund billionaire, bet against Asian currencies in 1997 and plunged the region into crisis. Millions lost their jobs, major riots ensued, and entire countries went into severe recession. Soros argues - with some accuracy - that the governments were to be blamed for their economic policies that led to artificial currency rates but the fact of the matter is he took advantage of it to make a lot of money for himself.

Here's a more common example: Splunk, a data company, recently went public at $17 a share. A month later the stock had doubled to $35. The banks and hedge funds who bought the shares initially are happy because they can sell now and make a tidy profit, but it means that the company raised only half the money it wanted. Still that's the way the world works and the financial community loves it. (Thanks, Joe Nocera, for that example)

Wall Street was not as happy when Facebook also recently went public at $38 and then the price dropped. Facebook walked off with extra money but many of the institutional buyers were the ones who lost out. (Perhaps Wall Street should have been less critical of a 28 year old with a hoodie who outsmarted them. He didn't need a sharp suit to take their money away from them)

Now back to the hedge funds robbing the banks. Weinstein noticed that Iksil (known as the London Whale) was making large bets on credit derivatives that didn't make sense and he bet against him. Weinstein, according to a recent New York Times profile who had himself lost $2 billion at Deutsche Bank when doing whale-sized bets, recognized the problem and moved quickly to profit out of it.

So who cares? One rich bank lost money to a rich hedge fund. Surely that is a zero sum game: They swap mansions and yachts, their partners swap diamonds and butlers, and it makes no difference to the rest of us. Or does it?

One of the biggest problems is that the world of finance is that it is actually awash in cash. And the owners of that cash want to make even more cash. "(C)orporate money has been flooding into JPMorgan, as companies pull their money out of eurozone banks," notes Gillian Tett at the Financial Times who says that roughly $2 trillion is available for investment at any given time. "Somehow you have to stash that money in an incredibly safe place, but also produce some returns. So where do you put it? In Treasuries, which carry negative real returns and are becoming riskier by the day? In eurozone bonds or corporate credit? Or can you find something else, without creating new risk?"

Remember also that even in these lean times, the titans of the hedge fund world are still mostly minting money: Raymond Dalio of Bridgewater Associates was paid an estimated $3 billion in 2011, Carl Icahn of Icahn Capital Management earned $2 billion. The top European hedge fund manager in 2011 was Alan Howard of Brevan Howard Asset Management, who earned $400 million last year. All told, the 40 highest paid hedge fund managers were paid a combined $13.2 billion in 2011, according to a Forbes magazine survey.

Same with the banks and CEOs.

Where did this money come from if the world economy is in a recession?

Well, the simple answer is that every day, both the banks and the hedge funds are taking little chunks of our money, although not in the extreme way that Soros did in Indonesia back in 1997. Higher interest rates; lower wages by moving factories; buying up farmland etc. etc.

The good news about the Jamie Dimon/JP Morgan debacle is that the U.S. Congress is taking notice about money being used rashly and may force the banks to make some changes. "We had too many regulators, too many gaps and too much overlap...we added more," Jamie Dimon told a U.S. Chamber of Commerce conference in Washington in 2011. "It's even more complicated now." (See here for a video compilation)

Dimon's remarks are being used to roast him now and it's high time. We need better regulation of both banks and hedge funds. One important reform is to make sure that investment banks and regular banks are separated. If the rich want to trade mansions, they can do so. But the investment banks and hedge funds should not be bailed out. And if they want to take money from the rest of us, they need to be kept in check.

Unfortunately that may be the opposite of what happens. As the Washington Post's Dana Milbank notes: "The trading scandal at JPMorgan highlighted the urgent need for tougher regulation of Wall Street, but (Alabama Congressman's) Shelby's harangue was part of a larger effort to use the scandal as justification to repeal regulations."