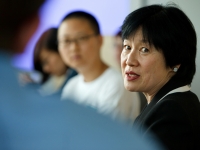 Five days a week, Alma Aranda goes to work at a customer call center operated by Verizon Communications in Oxnard, California. There she works an eight-hour shift fielding questions about billing statements or complaints about Internet service from the company's disabled customers. As soon as each call ends, Aranda punches a button and takes the next customer.

Verizon employs about 15,500 people in California and is one of the largest telecommunications companies in America. One of its most important customers is the federal government. Since 2012, Verizon has secured $1.7 billion in contracts to provide telecommunication services to the U.S. Departments of Defense, Homeland Security, and Health and Human Services.

Seven years ago, after countless inconveniences and humiliations, Aranda was left so shaken, depressed, and anxious by her job that her hair fell out in clumps.

At the time she was 44 years old with no husband and no children, and her only family was her mother and older sister, who lived in San Dimas, some 90 miles east. Her mother was suffering from Alzheimer's, and in 2007 she took a turn for the worse. Aranda's sister moved in with her mother to take care of her full time, and Aranda stayed with them on weekends to help out. Each Friday, at the end of her shift, Aranda would drive 90 miles to care for her mother, and then drive back on Sunday night.

Sometimes, when her mother had a crisis or had to go to the hospital for medical treatment, Aranda would take two or three days off from work. What made it hard were her supervisors at Verizon. "They needed to know specifically if she was ever going to get better or as the doctor put it, it was a lifelong illness," says Aranda. "It was just a constant occurrence, it was  a constant worry for me. And then it started affecting my own health. My hair back then was falling out. I had large spots with no hair."

Under both the California Family Rights Act and the U.S. Family and Medical Leave Act (FMLA), employees who work for companies with 50 or more workers have the right to take as many as 60 days of unpaid leave per year to care for a parent with a major medical issue.

Aranda's supervisors never exactly ignored the laws. But each time she asked for time off, they demanded that she and her sister fill out a complex application, complete with a signature from her mother's physician listing a host of minor details and affirming that her mother was suffering from Alzheimer's

For Aranda to gain permission from her supervisors to take time off to help her sister take care of their mother, her sister had to find a caregiver for her mother, drive to the local Kaiser Permanente hospital, find her mother's doctor, and have him fill out the same form he'd filled out countless times before."

Then they'd have to wait while someone at Kaiser reviewed the request. If the slightest detail in the form was improperly filled out, Kaiser's managers would reject the request, and the sisters would have to start all over again.

Sometimes Aranda's mother would suffer a medical emergency, and Aranda would not have the time to fill out a new form and wait for approval. So she would just drive up and take care of her mother.

That's when Verizon managers began writing Aranda up for taking unexcused absences. As her disciplinary record accumulated, Aranda began to worry that she would lose her job and her own health insurance. Every new bureaucratic burden increased her depression and anxiety until she had to seek medical care for herself.

By 2008, Aranda's mother had become so debilitated that Aranda and her sister decided that they had to find an institution to give her professional, 24-hour medical care. Aranda realized that this would be the last time she would see her mother in her own home, without the presence of constant medical staff.

So she took a month of medical leave in order to find an appropriate care center in San Dimas-and to say goodbye to her mother.

That time Verizon gave her a break. Rather than insisting that she file for approval in advance, her managers gave her a week or two during her leave to fill out the form. But by then, she had acquired a substantial disciplinary record. And once again, filling out the form made Aranda anxious that her request might be rejected or perhaps even worse.

"That was the worst, because I didn't know if I was going to have a job to come back to," Aranda says. "Because that was when they were asking me for repeated faxes, denying my request, requesting another review of the FMLA form. It was constant. I didn't truly have a month just to focus on my mother."

By June 2009, the doctors said Aranda's mother had one month left to live. Once again, Aranda took two weeks of medical leave to watch over her. And once again, Verizon forced her to fill out maddening amounts of paperwork. To add insult to injury, Verizon insisted on mailing the FMLA form to her home in Oxnard, despite the fact that Aranda was spending every possible moment by her mother's San Dimas bedside.

"I had to drive back the 90 miles to get the FMLA form that they mailed me," she says. "I had to drive an hour and half to check the mail for the paperwork they sent me. And I had a time limit to file, otherwise it wasn't going to be excused, and I was going to lose my job. So that was very stressful for me."

When her mother died in July, Aranda requested time off for the funeral. Her managers had two requests: Tell us when you are coming back and show us the death certificate.

But as Verizon soon discovered, Aranda was no passive victim. One year earlier, her union, the Communication Workers of America, began collecting stories like Aranda's and filing complaints with the California Department of Fair Employment and Housing (DFEH). Attorneys with the DFEH launched a two-year investigation and eventually found that the practice of denying or failing to give employees timely approval for family or medical leave was so widespread that it amounted to company policy. Up to 1,000 Verizon employees, DFEH lawyers estimated, had been denied their rights in California alone.

In 2010, the DFEH filed a class action lawsuit against Verizon under the California Family Rights Act on behalf of Aranda and an indeterminate number of plaintiffs. While admitting no wrong-doing, Verizon settled, agreeing to revise its policy and pay $6 million in damages. A few months later, Aranda got a check for thousands of dollars in the mail.

Verizon representative did not respond to requests to comment for this report.

This is not the first time Verizon was found to have violated the rights of its employees. After the 2011 electrocution death of an employee who was working on utility poles that carry power lines, OSHA found that Verizon New York failed to properly train the worker and provide necessary safety equipment.

Also in 2011, Verizon Communications agreed to pay $20 million to settle a nationwide disability discrimination lawsuit. The Equal Employment Opportunity Commission filed the suit against the company, alleging that its attendance policies failed to make reasonable accommodations for hundreds of employees with disabilities.

Verizon continues to receive federal contracts despite these ongoing problems. Since fiscal year 2012, Verizon and its subsidiaries have received about $1.7 billion in U.S. government contracts.