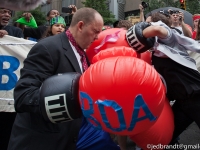 Thousands of community activists gathered in Charlotte, North Carolina, on Wednesday to protest at Bank of America's annual shareholder meeting. A boxing match billed as "Bank v America" was staged outside while inside, protestors from the mountains of Appalachia to homeowners in Ohio stood up to speak out against the company.

This is the latest in what has been perhaps the most diverse, widespread and sizeable protests of corporate annual meetings around the world to date. Traditionally these company gatherings are held in the spring after the publication of annual reports in April of each year. They tend to be dull affairs hosted by company management and attended by analysts from Wall Street and the City of London and a handful of shareholders.

Occasionally, church groups and environmental groups attend to speak out in favor of progressive resolutions that gather no more than five percent of votes from the big institutional investors who own the bulk of company shares. And sometimes there are a rallies outside led by the same groups.

But the scale of the protests 2012 has been different, first because of the return of the Occupy protestors who were evicted by police or winter conditions. These activists have bolstered the numbers outside the annual general meetings: in Detroit, hundreds of Occupy protestors marched to protest General Electric on April 25, 2012 to protest the way the company avoids paying taxes. Occupy also turned out in force to protest Peabody Coal in St. Louis, Missouri and Wells Fargo Bank in San Francisco last month.

We wrote about some of the initial protests last month:

"Wearing blue eagle masks and garlands of money, protestors gathered outside the Barclays bank shareholder meeting in London, while a giant, cigar-smoking inflatable rat accompanied activists at the Wells Fargo annual meeting in San Francisco. Meanwhile shareholders in Dallas voted overwhelmingly against a multi-million dollars pay package for Citibank's CEO while almost a third did the same at the Credit Suisse meeting in Zurich."

In the last week or so, this anger has spread, led surprisingly by institutional shareholders. The Financial Times and the Telegraph newspaper in the UK have labeled the phenomenon "shareholder spring" in which a number of CEOs have seen their multi-million dollar pay packages voted down under so-called "say on pay" rules that allow shareholders to reject excessive payments. In a May 4 editorial titled "Irresistible Rise of the Angry Investor" the Financial Times says: "Shareholders want executives to perform for their pay. Is that so much to ask?"

In a similar vein, the Observer newspaper in the UK noted: "Just weeks after the Occupy protesters were chucked out of the City, the sharp-suited fund managers who picked their way through the tents to get to their desks each morning have staged their own protest against fat-cat capitalism. On Thursday alone, five companies felt the wrath of investors and suffered revolts over their pay policies."

The list of companies affected to date is impressive: more than half of the shareholders of Aviva, the top UK insurance company, voted against the pay package of Andrew Moss, the CEO, forcing him to resign. Sly Bailey, CEO of Trinity Mirror, the country's biggest newspaper group (publishers of Daily Mirror, Sunday Mirror and People as well as the Sunday Mail in Scotland) has decided to step down after shareholders are expected to vote against her Â£1.7 million ($2.7 million) pay tomorrow. David Brennan, CEO of AstraZeneca, the Anglo-Swedish pharmaceutical company, has decided to retire early for the same reasons and Ralph Topping, the CEO of William Hill, a major UK betting company, is hanging on for dear life after 49.9 percent of shareholders voted against his Â£1.2 million ($1.92 million) pay package.

Next month Sir Martin Sorrell, the CEO of advertising giant WPP, who is paid Â£13 million a year ($21 million) expects to see protests when the company holds its annual meeting on June 13.

It's not just CEOs, board members have also come under fire. Alison Carnwath, a banker who sits on many UK boards, was protested at both Barclays bank as well as at hedge fund Man Group. "Alison Carnwath is the embodiment of "crony capitalism" that allows a small group of City figures to set each other's pay and bonuses without having to worry about the real world" wrote Jill Treanor and Rupert Neate in the Guardian.

One of the reasons that executives have managed to get away with excessive pay packages so far is the nature of corporate boards. Lord Myners, the former head of a hedge fund, told the Observer that the problem lay with the fact that company boards are handpicked by the chairman: "(W)e have the North Korean model, in which each candidate is re-elected every year, and 99.99% of them get voted in with 99.99% of the vote.

Stay tuned: tomorrow we will have more reports on the protestors on the outside - at the Bank of America annual meeting in Charlotte and the Enbridge meeting in Toronto, Canada.