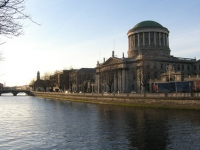 Seven Irish banks are being investigated by the Central Bank of Ireland for selling consumers insurance policies that they could not use. Tens of thousands of Irish consumers could get as much as â¬3,000 ($3,900) each in refunds.

The "payment protection scandal" involves a special kind of insurance that consumers can take out to pay off loans and credit card debts in the event of sickness or losing their jobs. Some 300,000 such policies were sold to Irish consumers between 2008 and 2011 alone. However only those who were fully employed are eligible to make claims to pay off their debt, not the self-employed, unemployed or temporary contract workers.

"We have found instances of people being sold policies who were ineligible to make claims due to their employment status," Bernard Sheridan, director of consumer protection at the Central Bank, told the Financial Times. "In some cases the insurance policies were literally add-ons to the loans, a box-ticking exercise."

Banks sell a number of kinds of insurance to their existing customers who are an easy client base. Mortgage insurance, which is fairly cheap, does cover those who are not full employed, but payment protection insurance, which is much more expensive, is different. Premiums often adding 20 percent to the cost of a loan, and sometimes over 50 percent.

"Expensive insurance means high commissions," explains Dan White, a columnist at the Irish Herald. "During the boom years, when it seemed as if just about anybody with a pulse qualified for a loan, the banks, eager for the commissions which it generated, pushed unsuitable payment protection insurance on borrowers who were in no position to resist their lender's "suggestion" that they purchase PPI when taking out their loan."

Six of the banks have been named - Allied Irish Banks, Bank of Ireland, Educational Building Society, GE Money, Permanent TSB and Ulster Bank - but the seventh bank has not. Ironically, four of these banks are now partially owned by the state because of recent bailouts.

The news has not gone done well in Dublin. "Being an Irish banker means never having to say you are sorry," writes an angry Dan White.

A similar scandal in the UK is estimated to have cost shareholders Â£9 billion ($14.6 billion) Lloyds bank alone set aside Â£3.2b billion (over $5 billion) to compensate customers who were missold payment protection insurance.

Which? magazine reported that one in three UK customers had been sold "worthless" payment protection insurance.  Citizens Advice described the insurance scheme a "protection racket."

This year Barclays bank is on track to get almost a million consumer complaints, mostly from customers angry at being sold such schemes, according to data from the UK Financial Services Authority. The bank has seen disputes almost double in the first half of this year. (In the first six months of 2012, a record number of 442,266 disputes were registered against the bank, more than any other UK bank. Lloyds received 805,716 complaints in 2011, Royal Bank of Scotland got 491,735, Santander received 240,597 complaints and HSBC had 170,064.)