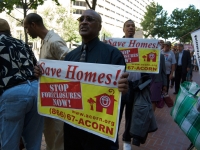 Morgan Stanley, a major U.S. investment bank, was well aware of the problems in the sub-prime mortgage market as far back as 2005, according to documents just released in a New York court under a lawsuit brought by the China Development Industrial Bank (CDIB) from Taiwan.

Sub-prime mortgages are a name for loans made to people who have bad credit and cannot borrow money to buy houses under normal circumstances. A flood of such loans from U.S. banks that lasted till 2006 created over $1 trillion in debt, typically for poor people, whose property values crashed when the housing bubble burst in 2007.

On July 15, 2010, CIDB brought a lawsuit in New York State Supreme Court in Manhattan over a $275 million portion of a collateralized debt obligation (CDO) sold to them by Morgan Stanley which contained large quantities of mortgage-backed securities that were built on pools of such loans. "The complaint asserts claims for common law fraud, fraudulent inducement and fraudulent concealment," wrote Morgan Stanley in a summary of the legal charges it was facing in its annual filings. The plaintiffs alleged that the bank "knew that the assets backing the CDO were of poor quality when it entered into the credit default swap with CIDB."

The court allowed CIDB to examine Morgan Stanley's emails which have just been made public. Jesse Eisinger of ProPublica, an investigative website, has written an excellent article explaining the scam. The documents reveal that the Wall Street bankers even cracked jokes about the quality of the loans that they packaged and resold to the Taiwanese suggesting that the CDO be called "Subprime Meltdown," "Hitman," "Nuclear Holocaust" and "Mike Tyson's Punchout" or "Shitbag."  Instead they played it safe and named the financial instrument STACK 2006-1.

"Ha ha. Those hilarious investment bankers," writes Eisinger sarcastically. "We are never going to have a full understanding of what bad behavior bankers engaged in the years leading up to the financial crisis. We are left with what scraps we can get from those private lawsuits."

"We are pleased that the court in this case is ordering Morgan Stanley to turn over damning evidence, so that the jury will get to see what Morgan Stanley really knew about the troubled nature of its supposedly 'higher-than-AAA' quality product," Jason Davis, a lawyer representing CIDB, told ProPublica. "While investors and taxpayers all over the world continue to choke on Wall Street's toxic subprime products, to this day not a single major Wall Street executive has been held accountable for misconduct relating to those products."

The bank has not denied the emails. "While the e-mail in question contains inappropriate language and reflects a poor attempt at humor, the Morgan Stanley employee who wrote it was responsible for documenting transactions," the bank wrote in a statement to ProPublica. "It was not his job or within his skill set to assess the state of the market or the credit quality of the transaction being discussed."

But even more damning is the fact that Morgan Stanley had already laid bets in the markets that such CDOs would fail. Howard Hubler, who set up an internal hedge fund named the Global Proprietary Credit Group at the bank in April 2006, where he "shorted" the sub-prime mortgage market. Hubler, however, made a costly mistake though by insuring other mortgages to pay for his bet, a tale told in Michael Lewis's book - The Big Short, which costs Morgan Stanley $9 billion.