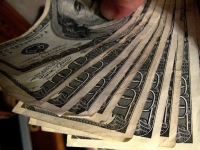 "The FX (foreign exchange) market is like the Wild West," James McGeehan of FX Transparency told Bloomberg news, which first broke the news of the scandal "It's buyer beware."

"This is a market where there is no law and people have turned a blind eye," added Ted Kaufman, a former U.S. Senator from Delaware. "We've been talking about banks being too big to fail. What's almost as big a problem is banks too big to manage."

Four of the 15 or so banks under scrutiny together control over half the foreign-exchange market, according to Euromoney, an industry publication. Barclays of the UK has 10.2 percent of the market, Citigroup in the U.S. has 14.9 percent, Deutsche Bank from Germany has a 15.2 percent share while UBS of Switzerland has 10.1 percent.

The most senior trader to be fired so far has been Rohan Ramchandani, the head of European spot foreign exchange trading at Citibank in London. Ramchandani has been accused of taking part in an electronic chat room dubbed "The Cartel" - one of many where traders would collude on fixing prices to increase profits. Other chat rooms had names like "The Bandits' Club," "One Team, One Dream" and "The Mafia."

Ironically the chat rooms were set up on Instant Bloomberg, a messaging system created by Bloomberg on its proprietary computer terminals that are popular with Wall Street traders.

Ramchandani has been accused of collaborating with Richard Usher of JP Morgan and Matt Gardiner, who worked at Barclays and UBS. The men are accused of taking advantage of a trading practice known as the London "fix."

The "fix" refers to the 60 second period at 4pm in the UK when the World Markets Company, a rate setting firm used by financial experts, takes an computer generated average of actual trades, to create a "benchmark" rate for 160 currencies for the day.

Banks often promise their major clients that they will sell them currencies at the "fix" price. As a result the busiest time of the trading day in foreign exchange is 4pm UK time to take advantage of the rate setting moment. (This practice is known as "banging the close.")

If the rates drop or rise unexpectedly at 4pm, these banks can lose a lot of money. So what the traders are alleged to have done was to agree among each other beforehand on how much of each currency that they would trade at what price at the 4pm "fix" so that they could predict the day's rate in advance and use it to make profits.

The foreign exchange trading scandal comes in the wake of the global interest setting scandal for which a number of the very same banks have had to pay out a total of $5.8 billion in fines to date.

That scandal involved LIBOR - or the London Inter Bank Offer Rate - a global system of interest rates for $360 trillion in international deposits. The rates are set by the British Bankers Association which makes a considered average of rates reported to them verbally by participating bankers. Such "LIBOR" rates exist for as many as 150 different kinds of loans - mostly for overnight transfers between banks although they ultimately also affect the price of consumer loans like mortgages, car loans and credit card loans.

Andrew Lo, a professor at the Massachusetts Institute of Technology, told Rolling Stone magazine that the LIBOR scandal "dwarfs by orders of magnitude any financial scam in the history of markets."