Of Disappearing Debt and Illegal Loans 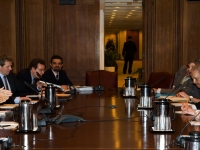 Why: Already heavily in debt from massive public-sector projects (notably for the military) it fiddled its books with the help of Goldman Sachs to join the euro. Then it borrowed even more for public-sector mega-projects like the Olympics.

Outcome: Greece has been forced to borrow €207 billion in potential loans by the Troika (the E.U., the ECB, and the IMF) in exchange for an austerity package. Borrowing costs hit 36.5 percent in February 2012.

In 2006 Yiannis Kazakos, the former mayor of Zografou, a suburb of Athens, arranged for his city council to borrow €25 million from Kommunalkredit International, the Austrian subsidiary of Dexia, to buy land in the middle of the council to build a shopping mall.[184]

Then came potentially deal-killing problems: First, construction on the land was not permitted; and second, the loan was illegal, city officials said, because the state's court of auditors had not approved it.[185]

For five years, city officials refused to repay the loans. Then in 2011, the IMF insisted that the government of Greece take on and repay the Zografou debt plus accrued interest—a total of €45 million—if it wanted to continue getting bailout money.[186]

Zografou was not the only council to ask Dexia for money for shaky municipal schemes. In 2006 Melisia and Volos Councils each borrowed €4.5 million from Kommunalkredit to buy up property for developing municipal squares.[187] Spyros Striftos, the mayor of Acharnon council, borrowed €20 million from Goldman Sachs, which in turn sold the debt to Dexia Credit Local.[188] Similar deals were conducted by the councils of Metamorfosis council, Nea Ionia, and Serres.[189]

While most of the mayors are gone, much of the outstanding municipal debt has simply transferred to the national government, under the agreements for the bail-out of Greece.

"In the 19th century, when foreign governments wanted to impose their will, they used gunships," Stathis Chatzopolous, a Greek lawyer told the Guardian. "Now they're using the IMF, the European Central Bank (ECB) and the European community."[190]

In the 1990s, bad credit and high interest rates would have prevented the councils, and the Greek government for that matter, from this easy borrowing. But all this changed when Greece joined the third stage of the European Monetary Union (EMU), and became eligible to use euros and get cheap foreign loans.

This was no easy task since Greece had to demonstrate a government debt of less than 60 percent of gross domestic product and a budget deficit to GDP ratio of under 3 percent. Unfortunately, Greece debt exceeded 100 percent and deficits were at 3.7 percent.[191] The Greek governmentlooked for external help for what Der Spiegel would later describe as ‘blatant balance sheet cosmetics’[192]

Enter Goldman Sachs, a Wall Street investment firm, which, for a reported $300 million fee,[193] came up with an innovative solution in 2001. Its financial experts took advantage of a loophole that allowed countries to enter the EMU if they could demonstrate that they were lowering their debt and their budget deficit. To do this, Goldman Sachs sold Greece a “cross-currency swap” that gave the government cash up front in return for a big payment at the end of the loan period. The beauty of the arrangement was that since such currency swaps were permitted by the European Statistical Agency (Eurostat), the debt and deficit appeared to shrink.[194]

On January 1, 2002, Greece joined much of the rest of the European Union in welcoming the euro as its physical currency. A pyramid of euro coins was built in the Syntagma Square in central Athens to celebrate the occasion.[195]

Once Greece was part of the EuroZone, it had no problem attracting low-interest loans from Belgian, French, and German banks eager to profit from an economy that appeared to have nowhere to go but up.

Unlike Spain, Greece did not see runaway speculation on commercial real estate although Eurohypo did set up an office in 2003, and finance projects in Athens and Thessaloniki. “The bank's real interest lies in very big projects of €50–€100 million and more, although it is accepted that there are not very many potential transactions of this size in the Greek market at this time,” Kenny Evangelo, head of Eurohypo’s Greek office told Investing in Greece in 2003. “Eurohypo would be happy if it could finance one relatively big project per year, together with four or five smaller properties.”[196]

On the other hand, investors snapped up Greek government debt for new public schemes including the hugely expensive 2004 Athens Olympics and one of Europe’s most expensive military budgets in relative terms. Hypo Real Estate bought €7.9 billion worth of Greek bonds, Dexia had €3.5 billion, while both Commerzbank and Société Générale had just shy of €3 billion.[197]WestLB also bought Greek bonds, and made loans to HLPAP, a Greek entity that runs the electric trolley system in the Athens and Pireas area.[198]

It should be noted that the historical Greek government debt—much of it acquired before joining the euro—was a result of decades of multibillion drachma government contracts. Most notable were those awarded to German companies including Ferrostaal and Siemens for expensive weapons systems, telecommunications systems, and even projects for the Ministry of Culture. These contracts were won via a system of bribes worth billions of euros paid out to officials in Greece’s two leading political parties.[199]

In December 2008, Siemens agreed to pay a fine of $1.6 billion to the U.S. Securities and Exchange Commission, the U.S. Department of Justice, and German authorities to settle charges of some $1.4 billion in international bribes over the years.[200] Later in April 2012, Siemens paid out €270 million to settle charges of bribery in Greece.[201]

"When German taxpayers are righteously indignant at having to bail out Greece’s creditors with their hard-earned euros, they should consider that their hard-earned euros of yesteryear financed corruption in Greece for the purpose of creating a massive Greek trade deficit,” wrote Criton Zoakos in International Economy magazine. Zoakos estimates that as much as 10 percent of Greece’s €235 billion cumulative debt went to bribes. “That trade deficit was in turn financed by German and other European banks at handsome, risk-weighted rates of return.”[202]

Another sector that saw a huge influx of foreign cash after Greece joined the euro was the banking sector. As previously described, Emporiki and Geniki were acquired by Crédit Agricole and Société Générale respectively. The French bankers poured money and advice into major expansions of these two small banks because of their access to cheap money. The banks, however, proceeded to lose billions of euros after loaning money to risk schemes??.

In October 2012, Crédit Agricole agreed to sell Emporiki to Alpha bank of Greece for €1.[203] The same month Société Générale sold all of its shares in Geniki bank to Piraeus Bank of Greece.[204]

But the sale of these two banks is still costing the Greek taxpayer dearly. By the end of June 2013, Alpha Bank and Piraeus Bank had borrowed €4 billion and €7 billion respectively from the Greek government, all of which had to be repaid with austerity.[205]

Outcome: It was given a €1.8 billion bailout in April 2013 by Cypriot government and renamed Cyprus Popular Bank.

An unexpected side effect of the economic crash in Greece was the impact on neighboring Cyprus. After the 2010 collapse, the Bank of Cyprus and Laiki Bank—the two biggest banks in the country—bought large quantities of Greek bonds at 70 percent of their original value, only to see them decline even further in value after international lenders forced the Greek government to accept a “haircut” in the value of the bonds. This unleashed a domino effect that soon swept up Cyprus into the Greek crisis.

The losses shone a spotlight on the role of Andreas Vgenopoulos, the Greek CEO of Laiki Bank, who made his reputation rescuing debt ridden shipping companies. During the boom, he invested the money he had raised in Cyprus in risky assets like Olympic Airways in Greece, which was losing €1 million a day.[206]

"When the Germans were selling, they were buying," Alexander Apostolides an economic historian at Cyprus' European University, told Reuters. "People are thinking in hope," added Simona Mihai, assistant professor at Cyprus European University's banking and finance department. "They do not see it from an analytical perspective."[207]

When Greek bonds were devalued, Laiki lost €2.3 billion, an amount equal to an eighth of the national gross domestic product, and the Bank of Cyprus lost €1.6 billion.[209]

In April 2013, Cyprus had to turn to international lenders for an emergency €10 billion bailout. Complicating the situation was the fact that Cyprus had become a tax haven for fabulously wealthy Russian oligarchs, whom ECB officials were extremely hesitant to bail out. Thus, for the first time, officials forced a “haircut” on private individual depositors. Anyone who had more than €100,000 lost 40 to 80 percent cut of their holdings.[210]