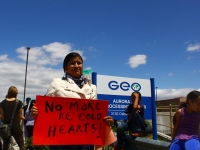 In Denver, the two companies together operate six “half-way homes” with a capacity of 500 people, under an annual contract that runs from July of each year. These facilities house former prisoners transitioning back into society. Geo Group also runs a federal migrant detention facility in Aurora, Colorado, just outside the city of Denver, that is not covered by the canceled contracts.

“We’ve gotta quit feeding the beast of for-profit in our criminal justice system,” Denise Maes, policy director for the American Civil Liberties Union of Colorado, told a Denver city council hearing. “Will my family end up in one of the GEO and CoreCivic concentration camps that profit off of us?” asked Alma Urbano, an undocumented immigrant, who also spoke at the hearing. Other groups that testified included Black Lives Matter, Colorado Criminal Justice Reform Coalition, Colorado Immigrant Rights Coalition, Colorado People’s Action, and the Democratic Socialists of America.

The 500 plus residents of the affected facilities have been thrust into limbo as a repercussion of the Denver vote because the six half-way homes affected have been run by private contractors for a number of years, and the city’s other facilities are near capacity. To ensure these residents would not be reincarcerated en masse, the Denver city council voted unanimously to sign short term contracts with Geo Group, until this December, and Core Civic until next June until such time as new arrangements can be made.

CoreCivic (formerly the Corrections Corporation of America), which is based in Nashville, Tennessee, operates 91 “correctional centers” across the U.S. while Geo Group, which is based in Boca Raton, Florida, owns and operates 133 “facilities.” They are the two largest private prison contractors in the country with a combined capacity of around 200,000 inmates for local, state and federal governments.

Together the two companies brought in over $4 billion in revenue in 2018, of which migrant detention for the federal government under President Trump is a growing and lucrative source of income. In 2016, for example, 72 percent of beds for migrant detention were in facilities run by private prison operators, the majority of which are CoreCivic and Geo Group, up from 49 percent in 2009, according to data compiled by the GlobalPost website from government sources and others.

Inhumane conditions reported at these migrant detention centers has drawn national outrage. The American Immigration Lawyers Association (AILA) has reported that the poor living conditions immigrants are subjected to has lead to sickness and even death. “Most of the people who are in detention centers are unrepresented, which is part of the problem,” Allen Orr, AILA’s president, told the GlobePost. “Senators aren’t even allowed [in immigration centers], so lawyers are definitely not allowed in.”

Meanwhile detainees at a CoreCivic managed migration detention center in San Diego, California, have sued the company for abusive practices. “The total number of civil immigration detainees who were subjected to defendant’s forced labor and human trafficking practices, and defendant’s illegal dollar-a-day work practices is currently unknown, but these illegal practices appear endemic to the CoreCivic operations on a California-wide, and indeed a nationwide, scale,” the plaintiffs stated in their 2016 complaint.

The Denver city council vote comes on the heels of decisions by multiple major banks including Bank of America, Barclays, BNP Paribas, Fifth Third Bancorp, JPMorgan Chase, PNC, SunTrust and Wells Fargo who have publicly committed to ending future financial ties with the private prison industry, including CoreCivic and Geo Group. Together, these banks represent an estimated 85 percent, or over $2 billion, of financial support for CoreCivic and Geo Group.

“SunTrust has decided not to provide future financing to companies that manage private prisons and immigration holding facilities,” said Sue Mallino, SunTrust chief communications officer, told Forbes magazine in June. “This decision was made after extensive consideration of the views of our stakeholders on this deeply complex issue.”

These decisions have dealt an enormous blow to the private prison operators because they rely heavily on financing from banks. The reason for this is that both companies opted to restructure from their traditional corporate structures to real estate investment trusts under new rules adopted by the Obama administration in 2013. This also gave them the benefit of tax breaks, notably under the 2017 amendments to U.S. tax laws signed by Trump, that lowered their tax rate from 36 percent to just 3 percent. However, because such real estate trusts have to pass on 90 percent of their income on to shareholders, this also means that these private prison firms do not have large amounts of cash on hand for ongoing operations or expansion and must rely heavily on banks.

This unusual funding model has made them vulnerable to progressive political activists. In the past year, The Families Belong Together Coalition, along with over 100 civil society organizations such as CREDO, Hand in Hand, the Interfaith Center of Corporate Responsibility, Make the Road New York, MomsRising, Presente.org and Real Money Moves gathered over 500,000 petitions and organized public protests at over 100 bank branches.

“Prison privatization has played a key role to advance mass incarceration in the U.S. These companies wield great influence as they lobby for an ever-expanding market share. The profit motive operates as a perverse incentive to cut operational costs, endangering the health and welfare of the people subject to confinement in their sub-standard prisons, jails and detention centers. I look forward to a day when this shameful industry will be dissolved,” Judy Greene, director of Justice Strategies, a non profit research organization dedicated to humane and cost effective criminal justice and immigration policies, said in a recent statement to the Private Correction Institute.

Both CoreCivic and Geo Group have reacted angrily to the divestments by Denver and the big banks.

“This reckless action will face significant ramifications and backlash as Denver’s elected leaders took a leap backwards away from nearly 30 years of operation in the city with proven, evidence-based treatment," Pablo Paez, a GEO Group spokesperson, told the Intercept website.

“[D]espite many of the banks claims of conducting a thorough review process, they clearly bow down to a small group of activists protesting and conducting targeted social media campaigns pushing false information rather than engage in a constructive dialogue about the facts,” Damon Hininger, CoreCivic CEO, said in a recent company call with investors. “The most disappointing aspect of these politicized bank decisions, disingenuous activists efforts, and no solution proposals from politicians, is the people who they ultimately hurt. It hurts the American people because of poor policies are being discussed, made or awarded based on misinformation rather than an open and honest dialogue on the challenges at hand.”

Privately operated prisons in the U.S. have been on a bit of a roller coaster in recent years. Overall, they have benefited hugely as the government has increased the number of people held in private facilities by almost 50 percent since 2000, according to numbers published by the Bureau of Justice Statistics. But in 2016, towards the end of Barack Obama’s presidency, the U.S. government decided to try to eliminate the use of private prisons, after a Department of Justice report found that private prisons were not actually saving money, and because of concerns about mistreatment of inmates.

President Trump reversed this trend but the new backlash from banks, local authorities such as in Denver and the general public now threatens to take some of those new profits away. “I brought the testimony to the table so my colleagues could hear the facts and initially did not believe that anyone would vote with me,” said Candi Cdebaca, a newly elected socialist member of the Denver city council, who proposed the measure, told the Intercept. “So I was very impressed by the courage my colleagues displayed to vote with me on a very controversial issue."