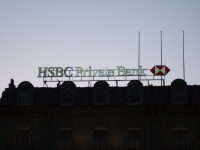 Argentina and Belgium have separately accused HSBC bank's Geneva branch of setting up a network of offshore accounts to help their citizens avoid paying billions of dollars in taxes. The Belgian charges were filed Monday and the Argentine charges were announced Friday.

HSBC, formerly known as Hong Kong & Shanghai Corporation after the city where it was founded in 1865, is now headquartered in the UK, but has 60 million customers across 80 countries with assets of $2.7 trillion. The two countries say that HSBC Private Bank SA in Geneva, Switzerland, provided their citizens with illegal financial services, money laundering and organized tax fraud.

The allegations are apparently based on documents released by HervÃ© Falciani, a whistleblower and former HSBC employee who was a systems engineer for the bank's Geneva operations. Falciani supplied the names of 127,000 HSBC clients to tax authorities across Europe and is now being pursued by the Swiss government which has accused him of theft.

Michel Claise, the judge in charge of the Belgian investigation, said that as many as 1,000 Belgian citizens were being investigated for setting up accounts in offshore locations like the British Virgin Islands and Panama. The Belgian media said that many of those accused were diamond merchants in Antwerp.

Argentina has made similar claims. "Through a complex platform, HSBC helped Argentines evade taxes using three different HSBC subsidiaries and offshore entities," said Ricardo Echegaray, head of Argentina's tax agency, at a press conference in which he announced the country's intention to pursuse the bank. "Its managers have intervened actively with the sole aim of helping Argentine citizens avoid paying their taxes."

Echegaray said 4,040 Argentine citizens were being investigated for hiding as much as $3 billion. A list of those accused was released that included Gabriel Martino, HSBC's president in Argentina, and Alfonso Prat-Gay, the former president of the Central Bank of Argentina, as well as businesses like CablevisiÃ³n, a cable TV operator, and Grupo Clarin, Argentina's largest media group. Also named were Christian Bassedas, manager of the VÃ©lez Sarsfield football team; and SebastiÃ¡n Eskenazi, CEO of YPF, the Argentine oil company.

Despite the fact the two sets of allegations are almost identical and in fact apparently based on the same documents, HSBC has reacted differently, perhaps capitalizing on the mainstream percention of Belgium as a reasonable government and Argentina as anti-capitalist.

"We will continue to cooperate to the fullest extent possible," HSBC said in a cautiously worded statement regarding the Belgian investigation.

On the other hand, it came out forcefully against the authorities in Buenos Aires. "HSBC Argentina emphatically rejects its participation in any illegal association, including any organization that allows capital flight aimed at evading taxes," HSBC said in a press tatement.

Neither allegations are particularly surprising. Switzerland has long been the place where the wealthy have set up home to evade taxes, and Swiss banks have often been forced to pay out large fines for illegal financial activities most notably in the case of Union Bank of Switzerland (UBS) which paid out $780 million in 2009 to settle charges of helping U.S. citizens evade taxes.

Falciani has spoken out against the Swiss banking system which he says is designed to help the wealthy. "Banks such as HSBC have created a system for making themselves rich at the expense of society, by assisting in tax evasion and money laundering," he told Der Speigel last year. "Money is easy to hide. These branches invite their clients to sporting and cultural events, where they meet intermediaries who explain how to get money to Switzerland without having to physically transport it across the border. They offer clients non-banking products, life insurance policies that exist for the sole purpose of tax evasion for example, or gold, which the bank stores in its safety deposit boxes for a fee."