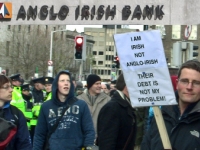 Executives at one of Ireland's biggest banks laughed and joked about how they were going to fool the Central Bank into bailing them out, according to a tape recording obtained by the Irish Independent. The failure of Anglo Irish Bank is eventually expected to cost the taxpayer â¬30 billion.

"If they (Central Bank) saw the enormity of it up front, they might decide they have a choice. You know what I mean?" John Bowe, a senior negotiator for the bank is heard telling his colleague, Peter Fitzgerald in late September 2008. "They might say the cost to the taxpayer is too high . . . if it doesn't look too big at the outset . . . if it looks big, big enough to be important, but not too big that it kind of spoils everything, then, then I think you have a chance. So I think it can creep up."

Bowe and Fitzgerald agreed to ask for â¬7 billion to start with.

Anglo Irish Bank, a local property finance bank, was founded in 1964 and gained a reputation for lending quickly for risky projects at a higher rate of interest. As one of the younger banks, it took a long time to expand, but when Ireland joined the euro in 1999, Anglo did a roaring trade as investors flocked to the country eager to set up offices to take advantage of the low tax rates.

Dublin was also famous for its light touch financial regulation where officials basically accepted reports at face value. As the building frenzy intensified, with nobody to check the books, Anglo Irish abandoned all caution and started to accept one mortgaged property as collateral for the next.

By 2006, a quarter of Ireland's working population were working in the construction industry and lending to the sector added up to 28 percent of all lending (compared to eight percent in the rest of Europe). Ireland was building over seven times as many houses as the UK and prices had risen five fold over 1994.

"Competitiveness didn't matter," Morgan Kelly, an economist at University College Dublin told Vanity Fair. "From now on we were going to get rich building houses for each other. "

When Lehman Brothers collapsed in September 2008, banks around the world simply stopped lending. With no speculative money to finance the building spree, the Irish economy went up in smoke.

The new Anglo Irish headquarters that was being built was abandoned as were hundreds of other projects to the tune of 100,000 housing units. The Economist described the "ghost" estates left behind as "an apocalyptic sight ... Rubble and rubbish lie everywhere. With wind howling and rain lashing, it is easy to imagine that you are gazing on the ruins of a failed civilisation. And in a way you are."

The Irish government scrambled to assure the public that they would guarantee the banks but this made people even angrier. "Our Future Killed by Wanker Bankers and Stupid Politicians" screamed a headline in the Irish Daily Star. "Greedy, Rotten, Liars" exclaimed another headline in the Daily Mirror.

Politicians were reluctant to investigate anything at the time. The release of these tapes almost five years later, however, has sparked demands for parliamentary inquiries into what really happened during the boom years.

"(P)eople must be prosecuted for their roles in collapsing the Irish economy," Pearse Doherty, Sinn FÃ©in finance spokesman, told the Financial Times.

"(T)hese tapes demonstrate very clearly is the need for a comprehensive inquiry into the banking crisis," added Michael McGrath, finance spokesman for Fianna FÃ¡il, one of the opposition parties. "The government has so far failed to initiate any form of inquiry, but ministers have talked many, many times about their desire to inquire into the 'night of the bank guarantee'."

Ironically Fianna FÃ¡il led the coalition governments that ran Ireland from 1994 to 2011, the time period that Anglo Irish Bank boomed exponentially before it went bust.