US: Critics Wary of Development Plans for Utah Land

Published by
Los Angeles Times
| By
Julie Cart
|
The proposed Washington County Growth and Conservation Act would sell up to 40 square miles of federal land and use the proceeds to finance a multimillion-dollar water pipeline and other local projects. Utah Republican Sen. Robert F. Bennett and Democratic Rep. Jim Matheson are expected to introduce the bill in coming weeks. Waiting in the wings are nearly a dozen similar bills for counties in Utah, Idaho, Nevada and New Mexico where population pressure is fueling the demand for more developable land. Read More

US: Privately Funded Trips Add Up on Capitol Hill

Published by
Washington Post
| By
Jeffrey H. Birnbaum
|
Over 5 1/2 years, Republican and Democratic lawmakers accepted nearly $50 million in trips, often to resorts and exclusive locales, from corporations and groups seeking legislative favors, according to the most comprehensive study to date on the subject of congressional travel. Read More

Published by
Associated Press
|
Employees at mortgage giant Fannie Mae manipulated accounting so that executives could collect millions in bonuses as senior management deceived investors and stonewalled regulators at a company whose prestigious image was phony, a federal agency charged Tuesday. Read More

Published by
Times-Picayune
| By
James Varney
|
Through a partnership with a smaller, minority-owned company, a sprawling multinational firm whose federal contract for travel trailers was up for rebidding has landed four new deals that could be worth $400 million, federal records show. Read More 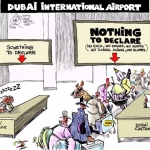 Industry: Military, Security & Surveillance, Property, Tourism & Transportation
Published by
Special to CorpWatch
| By
Pratap Chatterjee
|
The ports of Dubai make up some of the busiest commercial hubs in the world for the "global war of terrorism." Conveniently located between the Afghanistan and Iraq, Dubai is the ideal jumping-off point for military contractors and a lucrative link in the commercial supply chain of goods and people. Read More

Ports Deal is Not (Only) About Race; It's About Globalization

By
Brooke Shelby Biggs
|
We were getting all ready to climb up on our soapbox to shout our revelation to the word: the scandal of the Dubai Ports deal is not the knee-jerk reaction that exposes a deep-seated anti-Arab xenophobia among average Americans and Congress alike. No, it's about the little-known fact that major operations of ports in America are sold off in the global marketplace. How would we feel if JFK International was run by a Venezuelan company? Or if our interstate railways were run by Pakistan, or China, or Canada for that matter? Read More

Beyond Cronyism to Geopolitics in the Port Controversy

By
Brooke Shelby Biggs
|
As much as this is a story of privatization and racism, it is also about cronyism. The New York Daily News notes that Dubai Ports World has at least two ties to the Bush Administration - Treasury Secretary John Snow who, a year after joining the administration, sold his company's port operations to the same Dubai firm; and David Sanborn, the head of the U.S. Maritime Administration who still runs Dubai Ports World's European and Latin American operations. Read More

Published by
The New York Times
| By
James C. McKinnley Jr.
|
Mexico and Cuba criticized the United States on Monday for demanding that the Sheraton Maria Isabel Hotel here order a group of Cuban officials, who were meeting last week with representatives of American oil companies, to check out of the hotel and leave the premises. Read More