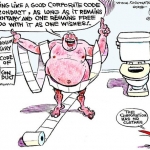 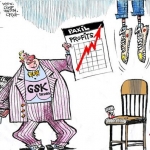 Published by
The New York Times
| By
Alex Berenson
|
Two years ago, when companies received a big tax break to bring home their offshore profits, the president and Congress justified it as a one-time tax amnesty that would create American jobs. Drug makers were the biggest beneficiaries of the amnesty program, repatriating about $100 billion in foreign profits and paying only minimal taxes. But the companies did not create many jobs in return. Instead, since 2005 the American drug industry has laid off tens of thousands of workers in thi Read More