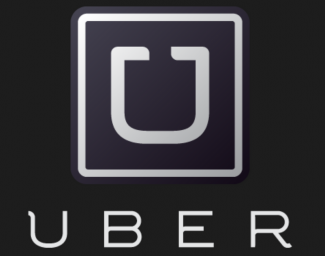 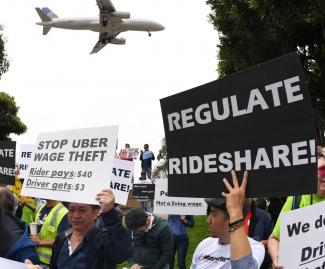 Uber is a taxi and food delivery service that contracts with gig workers and their vehicles. Founded in 2009, it uses phone location data to match drivers and customers. The first scandal to surface at the company was the use of customer data to spy on them using a tool called "God View.” Later the company was exposed for using another tool called “Greyball” to evade police and government officials as well as unwanted customers.  Uber has been heavily criticized for stealing taxi driver jobs, as well as for paying workers less than minimum wage and refusing to offer benefits such as healthcare and paid leave. Several legal challenges have been brought against Uber as well as a ballot initiative in California over these rights.

Together with other gig economy companies, Uber spent $200 million in 2020 to defeat a California law requiring the company to classify workers as employees but UK drivers won a unanimous Supreme Court ruling in February 2021 that forced the company to pay drivers minimum wage and for time off. Uber has been successful, however, in silencing female passengers who speak up about being assaulted in Uber vehicles. The company typically pays out an undisclosed sum to get them to go away, as in the case of a woman who was raped by an Uber driver in New Delhi, India, in 2014. In 2013, a six year old girl in San Francisco was killed by an Uber driver looking for customers.

Individual Records & Summaries
Click here for violation data on Uber Technologies
Information in this section is drawn from the Violation Tracker database produced by the Corporate Research Project of Good Jobs First in Washington DC. It is the most comprehensive source of data on business violations of laws and regulations in the United States. For specific examples of misconduct, please click on the links. 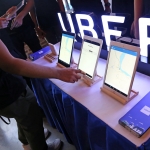 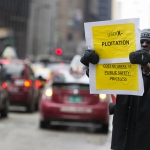 An Uber self-driving test car which killed a woman crossing the street detected her but decided not to react immediately, a report has said.

Uber is trying to force women who say they were sexually assaulted by drivers to resolve their claims behind closed doors rather than in the courts,a move that critics say silences victims and shields the company from public scrutiny.

Uber and Lyft drivers in the US make a median profit of as little as $8.55 per hour before taxes, according to a new report that suggests a majority of ride-share workers make below minimum wage and that some actually lose money.

A scene from the 1987 movie Wall Street became a flashpoint in the trial in which Google’s driverless car spinoff Waymo accuses the ride-hailing company Uber of stealing trade secrets.

Uber, the global taxi technology company, has been using a clandestine tool named "Ripley" to thwart government oversight of the ride-sharing company by restricting

Uber has settled a lawsuit with the family of a child killed by one of its drivers in San Francisco, in one of the most high-profile cases to raise questions about the safety risks of the ride-sharing market. 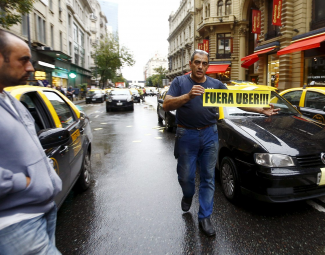 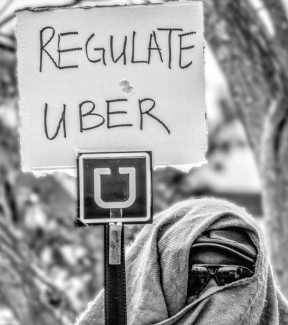 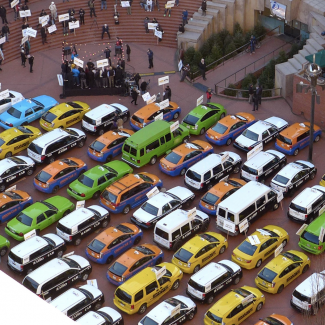 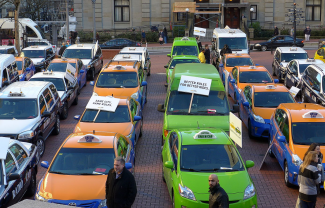 Hundreds of yellow-and-black taxi cabs disrupted traffic in Barcelona on Thursday to protest the return of the ride-hailing giant Uber to the northeastern Spanish city after a 2-year hiatus.

An industry body has called the demonstrations "the largest taxi protest" in Germany's modern history. Taxi drivers are rallying against plans to open Germany to ride-hailing services like Uber.

Hundreds of taxi drivers on Monday blocked downtown Warsaw in protest over a Polish draft law they see as favourable to ride-sharing app Uber as well as over US support for the American firm.

Hundreds of taxi drivers marched in central Athens on Tuesday to protest at what they called an “invasion” by Uber, and attacked passing cars they thought were being used by the ride-hailing service.

Taxi drivers sowed traffic chaos in Europe's top cities on Wednesday by mounting one of the biggest protests ever against Uber, a U.S. car service whose smartphone app summons rides at the touch of a button.

California's clean air regulator on Thursday adopted rules to mandate that nearly all trips on Uber's and Lyft's ride-hailing platforms have to be in electric vehicles over the next few years, the first such regulation by a U.S. state.

After a year spent refusing to give California regulators detailed information on sexual assault and harassment claims made by drivers and riders, Uber is being fined $59 million.

In 2017, a former Uber employee wrote a public essay describing how the ride-hailing company had permitted sexual harassment to fester at the workplace.

Uber stopped its own investigators from reporting crimes to the police

The special investigations team inside Uber, which fields complaints from riders and drivers, is not allowed to escalate those issues to law enforcement or file official police reports “even when they get confessions of felonies,” according to The Washington Post.

A year into the pandemic, Uber and Lyft drivers say gig companies are still failing them. They blame Prop 22.

Rideshare and food delivery drivers are planning to protest Wednesday outside Uber's headquarters in San Francisco, California, over what they say is gig companies' continued failure to protect them nearly a year into the COVID-19 pandemic.

Around 100 Uber and Lyft drivers are staging a caravan protest at Uber’s San Francisco headquarters to demand Uber comply with gig worker protections law AB 5, pay into the state’s unemployment insurance fund and drop the ballot initiative it proposed along with Lyft and DoorDash ...

More than 1,000 Uber and Lyft drivers protested their pay and working conditions on Tuesday by blocking rush-hour traffic in Manhattan. Earlier this year, CNBC interviewed several Uber drivers about their financial lives. Below are their stories.

Tina Turrieta drives for Uber full time. She's a single mom, who was laid off her job in December. She says Uber's new pay cuts make her feel hopeless.

Subsidy Tracker is a project of Good Jobs First in Washington DC. It is the most comprehensive source of data on state and federal subsidies in the United States. For more details, click on the links.
Click here for details on subsidies recieved by Uber
Tax Havens

How Uber Australia fills a Dutch 'cash pool' and why it is fighting an $81.5m payroll tax bill

Uber Australia has continued its longstanding practice of sending revenue to its head company in the Netherlands.

Uber has been using a complex tax shelter involving around 50 Dutch shell companies to reduce its global tax bill, according to recent research from the Center for International Corporate Tax Accountability and Research.

The VCs were desperate to give him more money. It was the spring of 2013, and Uber CEO and co-founder Travis Kalanick was weeks away from negotiating a new round of venture capital financing that would multiply the valuation of his car-hailing startup by a factor of 10—from a mere $330 million to $3.5 billion.

Uber contracts with the U.S. Federal Government (via USA Spending)