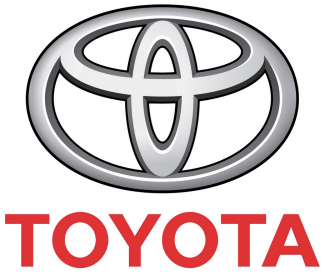 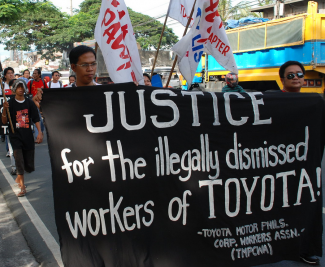 Toyota makes and sells more cars than almost any other manufacturer in the world. Founded in 1937, the company has been investigated for a number of safety defects such as unintended acceleration in certain vehicle models, use of sub-standard metal components, installation of faulty airbags, and seatbelt failures. It paid out a fine of $1.2 billion in 2014 to the U.S. for hiding information about acceleration problems from buyers and government officials, as well as $1 billion in compensation to car owners, after as many as 37 people were reported killed in runaway vehicles. Workers at Toyota factories in Canada, India, Mexico, and the Philippines as well as the state of Kentucky. have protested the company’s low pay and benefits, and union busting.

The company has been forced to recall millions of vehicles each year to fix manufacturing defects. For example in 2009 and 2010, Toyota recalled over 10 million vehicles over unintended acceleration problems and in 2016, Toyota recalled 1.4 million Prius and Lexus models equipped with faulty Autoliv airbags as well as 3 million RAV4 sport utility vehicles over faulty rear seatbelts. In 2018, Toyota was ordered to pay out $21.9 million in restitution to thousands of minority buyers in the U.S. who were forced to pay higher interest rates than white borrowers for their auto loans. China fined Toyota 87.6 million yuan in 2019 over price-fixing on Lexus cars in eastern Jiangsu province.

Individual Records & Summaries
Click here for violation data on Toyota
Information in this section is drawn from the Violation Tracker database produced by the Corporate Research Project of Good Jobs First in Washington DC. It is the most comprehensive source of data on business violations of laws and regulations in the United States. For specific examples of misconduct, please click on the links. 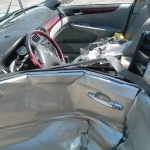 Published by
Boston.com
| By
Mark Stevenson
|

MEXICO CITY (AP) — Auto worker Ivan Flores spends his days transporting parts for U.S.-bound Audi SUVs at a plant in central Mexico, but he laughs when asked if he could ever buy one of the $40,000 Q5 SUVs the plant produces on his $2.25 per hour salary.

Three more deaths apparently linked to runaway Toyotas have been posted on the government's auto-safety database, which would bring totals to 37 fatalities in 29 incidents.

Toyota Warns US Workers: Build Camry for Less, or Else

Published by
Yahoo
| By
Paul Ausick
|

Toyota Motor Corp. (TM) opened its first U.S. plant in 1988 in Georgetown, Kentucky. The plant's 8,200 employees produced 500,766 vehicles last year, most of which were the company's best-selling Camry sedan.

A Toyota Factory Revs Up in Tijuana

Toyota Motor Corp. didn’t rely just on the help-wanted section in the newspaper here when it was ready to begin staffing the assembly line at its newest factory.

Toyota Motor has decided to postpone the opening of a new plant in Myanmar amid heightened political uncertainty following the Feb. 1 coup, Nikkei Asia has learned. The plant was scheduled to open this month.

It’s been a bumpy ride for the auto industry in the ongoing battle over clean car regulations and California’s authority to set stricter rules for vehicle emissions.

Public concern about faulty automobile airbags spread to a second major supplier on Wednesday, after Toyota recalled 1.43 million Prius and Lexus models equipped with bags made by Autoliv, a big Swedish-American manufacturer. 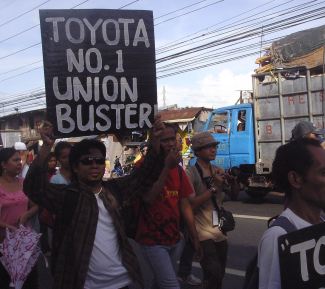 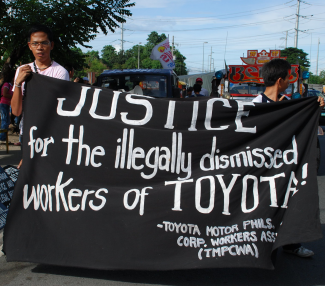 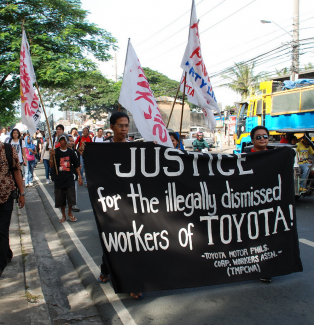 Labor and church leaders are speaking out against what they describe as the unjustified firings, on-the-job injuries and overuse of temporary workers taking place at Toyota.

TMPCWA filed a complaint against Toyota Motor Philippines Corporation (TMP) for labour rights violations. The complaint alleges TMP refused to recognize TMPCWA as the sole and exclusive bargaining agent, and the company has actively tried to hinder workers right to association and collective bargaining.

Toyota has agreed to pay $180 million to settle claims that the company failed to comply with the US Clean Air Act for a decade.

China's market regulator on Friday has fined Japanese carmaker Toyota Motor 7203.T 87.6 million yuan ($12.5 million) for price-fixing on its premium Lexus cars in eastern Jiangsu province, according to a document on its website.

U.S. consumers have filed a lawsuit against Kobe Steel Ltd 5406.T and Toyota Motor Corp 7203.T accusing the companies of violating consumer protection laws and engaging in fraud by concealing the use of substandard metal components in vehicles.

In a major development on Tuesday, Toyota Kirloskar Motors (TKM) announced lifting of the lockout at its Bidadi-based manufacturing plants in the State. The automobile company announced lockout on November 10 last year following strike called by employees union.

Over 3,000 Toyota Kirloskar Motor (TKM) workers in the southern Indian city of Bangalore are continuing their strike, now nearly three months long, against speed-up and management harassment. The workers are continuing to defy a back-to-work order issued by the Hindu supremacist ...

Ground report: 37 days in, why Toyota Kirloskar workers in Bidadi continue to protest

Nearly 3,500 workers have been protesting at the Toyota Kirloskar Motors Bidadi plant for the past 37 days.

The head of a U.S. anti-union group that helped defeat a UAW campaign at Volkswagen’s plant in Tennessee is urging Toyota workers in Ontario to reject an organizing drive  waged by Unifor.

Subsidy Tracker is a project of Good Jobs First in Washington DC. It is the most comprehensive source of data on state and federal subsidies in the United States. For more details, click on the links.
Click here for details on subsidies received by Toyota
Tax Havens

Toyota is under investigation in Thailand over allegations that consultants hired by the world’s largest carmaker tried to bribe local officials in a tax dispute, according to Thai authorities, court documents and a person with knowledge of the matter.

More than six months before Toyota disclosed concerns to U.S. authorities about possible foreign bribery in Thailand, the automaker launched its own investigation into whether its consultants paid off Thai judges and government officials in an effort to overturn a $350 million import tax judgment ....

Toyota contracts with the U.S. Federal Government (via USA Spending)

Toyota contracts with the U.S. Federal Government (via SAM)