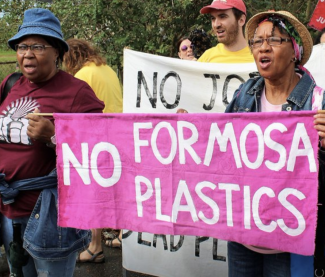 Formosa Plastics Corporation was founded in 1954 in Taiwan. It manufactures plastics, and is one of the world’s largest manufacturers of polyvinyl chloride (PVC). The company first attracted global attention when it was caught dumping 3,000 tons of toxic mercury-laden waste in Sihanoukville, Cambodia, that originated at a PVC plant in Kaohsiung, Taiwan. In 2012, the company became infamous again when it unsuccessfully sued Ben-Jei Tsuang, a professor at the Department of Environmental Engineering in National Chun Hsing University, who published a paper linking high cancer rates in Mailiao,Taiwan, to toxic dioxin and heavy metals air pollution from the Six Naphtha Cracking plant.

PVC plants operated by Formosa in Baton Rouge, Louisiana, and in Point Comfort, Texas, have also been subject to numerous protests over pollution and elevated cancer rates. Several workers have also been injured and others killed in explosions at the Point Comfort plant in 2005 and at a PVC plant in Illiopolis, Illinois in 2004.

In 2018, the company announced plans to build a $10 billion complex named ‘The Sunshine Project,’ with 10 chemical manufacturing plants, in St. James Parish, Louisiana, in ‘Cancer Alley,' an 85 mile stretch of the Mississippi river with over 150 toxic petrochemical plants. Organizations such as EarthJustice and Rise St. James successfully sued to subject Formosa to an environmental review over the 800 tons of toxic air pollutants as well as the 13.6 million tons of greenhouse gases that the project is expected to emit annually.

Formosa was fined $500 million in Vietnam after the company admitted dumping toxic waste in at its steel plant in Ky Anh that resulted in a massive fish kill along a 120 mile stretch of Vietnam's central coast.

Individual Records & Summaries
Click here for violation data on Formosa Plastics
Information in this section is drawn from the Violation Tracker database produced by the Corporate Research Project of Good Jobs First in Washington DC. It is the most comprehensive source of data on business violations of laws and regulations in the United States. For specific examples of misconduct, please click on the links.

Inside Louisiana's horrifying 'Cancer Alley,' an 85-mile stretch of pollution and environmental racism that's now dealing with some of the highest coronavirus death rates in the country

Does Another Plastics Plant in Louisiana’s ‘Cancer Alley’ Make Sense? A New Report Says No

Published by
Inside Climate News
| By
James Bruggers
|

Published by
The Guardian
| By
Oliver Laughland
|

The US government has placed further delays on a proposed multibillion dollar plastics plant in south Louisiana, marking a major victory for environmental activists and members of the majority Black community who have campaigned for year

Published by
Center for Constitutional Rights
|

For decades, those on the frontline of the environmental justice struggle have faced legal intimidation and harassment for speaking out against chronic pollution in “Cancer Alley,” an 85-mile stretch of oil, gas, and petrochemical facilities along the Mississippi River between Baton Rouge 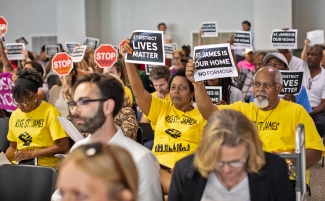 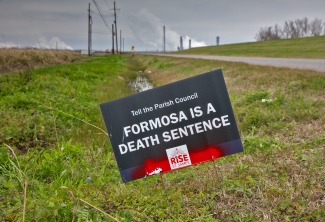 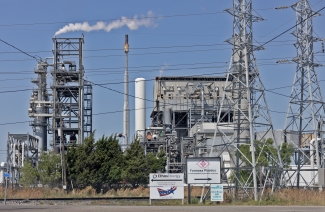 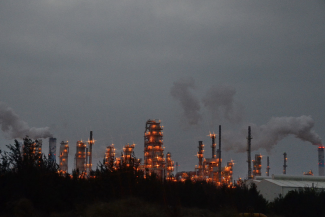 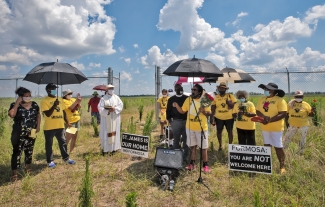 Vietnam has asked Formosa Ha Tinh Steel Corporation to pay $500 million in compensation for dumping toxic waste in Ky Anh that resulted in a massive fish kill on a 120 mile stretch of Vietnam's central coast in the provinces of Ha Tinh, Hue, Quang Binh and Quang Tri.

As part of the fossil fuel industry’s push to increase North American plastic production by 35 percent by 2025(1), Formosa Plastics is planning to build a massive petrochemical industrial complex in St. James Parish, Louisiana.

Black residents in Louisiana communities hit hard by Hurricane Ida have been fighting for environmental justice there for decades. Hurricane Ida made their task even harder.

The US government has placed further delays on a proposed multibillion dollar plastics plant in south Louisiana, marking a major victory for environmental activists and members of the majority Black community who have campaigned for years against construction.

‘This is environmental racism’: activists call on Biden to stop new plastics plants in ‘Cancer Alley

On Monday, groups of climate activists protested against a proposed petrochemical complex an hour away from New Orleans, Louisiana, calling on the Biden administration to revoke the plastics company’s federal permit to start construction.

One of the nation’s most prominent defenders of the poor and their right to live in environments free of pollution included Louisiana’s Cancer Alley in his weekly call to activism Monday during which a St. James Parish resident accused the state’s leading Democrats, specifically Gov. John Bel Edwards and ...

The Big March to Save Lives in Death Alley

In spite of the important coverage the Lens has given to the cancer-causing emissions of petrochemical plants in St. James and St. John Parishes, most Louisiana readers must learn what’s going on from the national press.

About 100 mostly fishermen from central Vietnam’s Quang Binh Province have held three days of protests over what they say is inadequate compensation for lost livelihoods caused by a toxic waste spill that occurred along the country’s central coast in April 2016, a priest from the village told RFA.

Thousands of demonstrators converged on a Taiwanese steel factory in Vietnam's central province of Ha Tinh on Sunday to press claims over a major toxic spill in April that killed tons of fish and devastated the local economy.

Formosa Plastics Corporation, Texas, has agreed to pay $2.85 million in civil penalties and to improve its risk management program to resolve alleged violations of the Chemical Accident Prevention Provisions of the Clean Air Act (CAA) at its petrochemical manufacturing plant in Point Comfort, Texas.

The Formosa Sunshine Project in St. James Parish, Louisiana, will undergo a full formal environmental review, the U.S. Army Corps of Engineers announced in a memorandum issued today and posted on Twitter.

A three-judge state appellate panel found on Monday that an East Baton Rouge Parish judge "abused her discretion" when she directed state regulators to reevaluate critical air permits for a Formosa Plastics complex in St. James Parish even before hearing the merits of the case.

The judge determined this week that the Taiwanese-owned company has been in "enormous" violation of its state-issued permits and federal clean water laws for discharging plastic pellets and other pollutants into Lavaca Bay and other waterways from its plant in Point Comfort.

On a warm, breezy afternoon last week, Diane Wilson stood at the front of a deep, metal storage shed, covered in a sheen of sweat. It was still full of stuff — blue tarps, file cabinets, luggage and plastic boxes filled with paperwork. But it had been far more crowded just days earlier.

When the X-Press Pearl container ship caught fire and sank in the Indian Ocean in May, Sri Lanka was terrified that the vessel’s 350 tonnes of heavy fuel oil would spill into the ocean, causing an environmental disaster for the country’s pristine coral reefs and fishing industry.

On Thursday afternoon, Seadrift environmental activist Diane Wilson rummaged in the mud along the banks of Cox Creek in Point Comfort and dug up a handful of dirt sprinkled with small plastic pellets.

On the afternoon of Jan. 15, activist Diane Wilson kicked off a San Antonio Estuary Waterkeeper meeting on the side of the road across from a Formosa plastics manufacturing plant in Point Comfort, Texas.

The government of Vietnam, breaking its silence about a huge fish kill in April, said on Thursday that the coastal disaster was caused by a Taiwan-owned steel factory that discharged a combination of chemicals, including cyanide, into the ocean.

Ronnie Hamrick dumped debris from a 17-ounce disposable cup onto a concrete slab at the marina off Main Street.

About 5,000 Formosa Chemicals & Fiber Corp workers, their families and supporters staged a protest on Saturday, demanding the Changhua county government allow FCF’s factory in the area to resume production.

Sixty people, including police and reporters were injured during a protest in Changhua County when protesters clashed with police over the closing down of a chemical plant.

Subsidy Tracker is a project of Good Jobs First in Washington DC. It is the most comprehensive source of data on state and federal subsidies in the United States. For more details, click on the links.
Click here for details on subsidies received by Formosa Plastics
Tax Havens

In the second half of 2018, Taiwan will undergo an on-site evaluation by the Asia/Pacific Group on Money Laundering (APG), and if the group finds Taiwan has not met international standards, it could adversely affect the country’s financial and trade standing.

The US Army Corps of Engineers suspended a permit for the construction of Formosa Plastics’ $9.4 billion complex in St. James Parish, Louisiana, earlier this month, claiming that the Corps had eliminated from evaluation five alternative sites for the plant in nearby Ascension Parish ....

Formosa Petrochemical Corp. has selected Louisiana’s St. James Parish for a new $9.4 billion chemical manufacturing complex. The company has purchased a 2,400-acre site along the west bank of the Mississippi River, just downriver from the Sunshine Bridge, where in two phases it will build a complex....