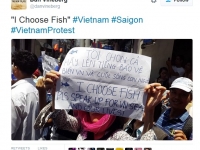 Vietnam has asked Formosa Ha Tinh Steel Corporation to pay $500 million in compensation for dumping toxic waste in Ky Anh that resulted in a massive fish kill on a 120 mile stretch of Vietnam's central coast in the provinces of Ha Tinh, Hue, Quang Binh and Quang Tri.

Formosa Steel, a subsidiary of Formosa Plastics Group, built the steel plant in 2011 on 1,000 hectares of land after relocating 1,500 households. The plant was part of a $10.6 billion industrial complex that also included a power plant and a deep sea port. At the time the company also constructed a massive sewage pipe that discharged 12,000 liters of wastewater a day without informing the local community.

The company, which is the second largest producer of poly vinyl chloride in the world, has often been criticized for its environmental record. Good Guide rates the company in the top 10 percent of environmental violators in the U.S.

In early April 2016, tens of tons of dead fish started to wash up on beaches prompting alarm. "If you sail just three miles offshore, you can see dead fish all over the ocean floor," local fisher folk told Tuoi Tre newspaper.

Government officials issued a ban on fishing in the region and made daily payments of 50,000 dong ($2.20) to affected fish workers and distributed bags of rice in compensation.

Initially the government dismissed claims that Formosa Steel was responsible for the fish kill. "Our test results indicate there is no evidence to conclude that Formosa in Ha Tinh province is behind the mass fish deaths," Vo Tuan Nhan, the deputy minister of Natural Resources and Environment told the media at a press conference. "The environmental indicators do not exceed the regulatory threshold."

Locals were outraged. "If we knew who put the poison in the ocean, we would like to kill them," Pham Thi Phi, a fisherwoman in Nhan Trach told the New York Times. "We really need to have an answer from the government on whether the ocean is totally clean and the fish are safe to eat."

"It's appalling that the authorities cracked down and detained peaceful protesters in Hanoi and elsewhere instead of providing even the most basic answers about the massive fish kills," Phil Robertson, deputy director for Human Rights Watch in Asia, told Voice of America news service. "The Vietnam government should let the people express their views and hold their public assemblies rather than continuing this campaign of harassment, intimidation and detention."

In late June, the government finally acknowledged that Formosa Steel was responsible. Eventually the company also admitted that it had dumped cyanide, iron hydroxide and phenols into the sea.

But at first the company was defiant saying it had done nothing wrong. "Before we built the plant, we got the permission from the Vietnamese government," Chou Chun Fan, the head of the Hung Nghiep Formosa Ha Tinh Steel Company office in Hanoi told reporters. "You want the fish, or the steel plant? You have to choose. If you want both, I will tell you that you can't, even if you are the prime minister."

Fan's remarks incited a firestorm of criticism and the company backed down. "We deeply hope the Vietnam people can forgive us," Tran Nguyen Thanh, chairman of the board of Formosa Plastics said in an video statement.

Vietnamese scientists say that the coral reefs in central Vietnam could take 50 years to recover.