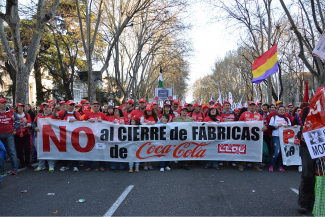 Coca-Cola is a beverage company founded in 1892 that is best known for carbonated soft drinks. The original Coca-Cola drink contained trace quantities of cocaine. Today the company's products are far more controversial because many contain large quantities of sugar like Coke which has 10.6 grams per 100 ml, which has been directly linked to weight gain. The company is also notorious for marketing these drinks to children and paying scientists to promote the idea that lack of exercise is the cause of obesity rather than sugar. Coca-Cola was ranked the world’s No 1 plastic polluter after its beverage bottles were the most frequently found discarded on beaches, rivers, parks and other litter sites in over 50 countries. Coca-Cola has been accused of over-extraction of groundwater in India and Mexico and of abusing workers's rights in Colombia, Guatemala, Russia and Turkey.

Individual Records & Summaries
Click here for details of Coca-Cola's violations.
Information in this section is drawn from the Violation Tracker database produced by the Corporate Research Project of Good Jobs First in Washington DC. It is the most comprehensive source of data on business violations of laws and regulations in the United States. For specific examples of misconduct, please click on the links. 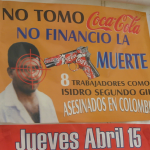 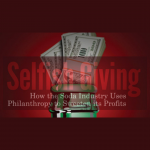 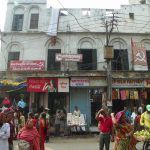 The Case Against Coke

Published by
The Nation
| By
Michael Blanding
|

The ballroom at the Hotel du Pont in Wilmington, Delaware, is the picture of opulence. Paintings of Greek gods and goddesses peer down from the walls, lit by two crystal chandeliers the size of Mini Coopers.

Published by
Down to Earth
|

The Coca-Cola Co has emerged as the No.1 global plastic polluter for the second consecutive year, according to a report on the top 10 plastic polluting companies in the world. The beverages brand was followed by Nestlé SA and PepsiCo In.

A fine was also levied on ITC and a notice was issued to come up with environmentally-friendly alternatives for cigarette packaging within 30 days. 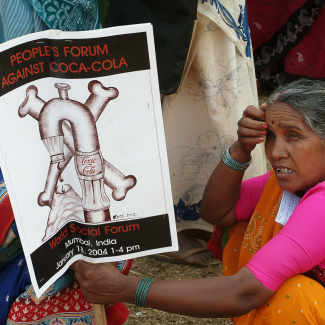 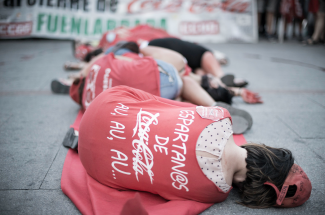 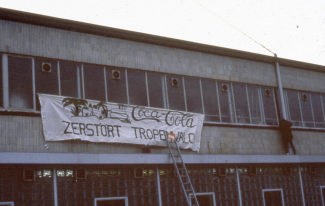 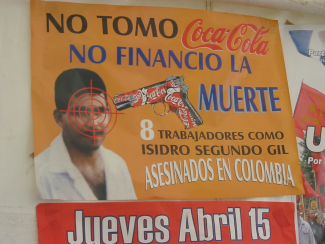 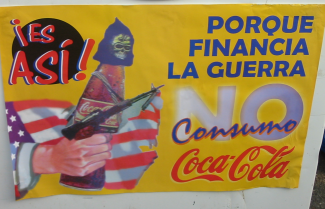 Angry workers of the Coca-Cola Bottling Company Limited in Ghana have protested at the premises of the company following the alleged dismissal of about 30 of their colleagues.

Workers at the Coca-Cola Bottling Company in north Toledo are on strike, already planning for the days ahead after they walked off the job just after midnight Sunday.

“The Coca-Cola Company and our other defendants churn out millions of tons of plastic packaging each year and want us to believe that it is all being recycled. It’s a misinformation campaign, similar to those used by Big Tobacco, Big Oil, and Big Pharma. Now is the time to hold Big Plastic similarly accountable.”

Dozens of workers at one of Coca-Cola’s largest bottling and distribution plants have refused to go to work for almost two months, demanding the same 20 percent increase with a $32,000 peso bonus.

They sent a letter to the multinational corporation, a copy of which AFP has seen, giving it 10 days to explain its "non-consensual use" of the word "Coca" in Coca-Cola -- the world's most popular fizzy drink. If the company fails to reply, the communities threatened "judicial and commercial measures"...

Did Coca-Cola Ever Contain Cocaine?

Scientific research is constantly discovering new things about drugs, such as the health benefits and risks of using (or misusing) them. Sometimes, these discoveries lead to changes in the way a drug is used.

Coca-Cola churns out a number of beverages here, including Dasani bottled water, which generated more than $1 billion in U.S. sales in the past year, according to market research firm IRI.

High-protein milk brand Fairlife has been hit with a second wave of proposed class action lawsuits – one of which names JV partner Coca-Cola as a defendant - following the release of videos showing animal abuse at Fair Oaks Farms in northwest Indiana, its “flagship farm,” which used to supply some of its milk.

Coca-Cola has been accused of using legal manoeuvres to delay an official investigation into a misleading advertising campaign in Mexico by accusing the government agency of acting unconstitutionally.

Coca-Cola Sued for ‘Campaign of Violence’ in Guatemala

All over the world, tabletops, football stadiums, and corner shop windows are branded with its iconographic white-on-red, swirling text. Coca-Cola isn’t just a product, it’s an institution and a corporate behemoth. And right now it is facing a lawsuit in New York brought by two bottling plant workers from Guatemala.

A US court has ruled that Coca-Cola's main Latin American bottler can stand trial for allegedly hiring right-wing paramilitaries to kill and intimidate union leaders in Colombia.

Coke and Pepsi sued for creating a plastic pollution ‘nuisance’

Coke, Pepsi, Nestlé and other large companies are being sued by a California environmental group for creating a plastic pollution “nuisance” and misleading consumers about the recyclability of plastic.

Audio obtained by The Intercept reveals how Coca-Cola’s “green” philanthropy helped squelch an important tool in fighting the plastic crisis.

Undercover footage showing young dairy calves being kicked, violently thrown, having their heads stamped into the ground and suffering from heat exposure at a US farm known as the “Disneyland of agricultural tourism” was published this week.

Greenpeace campaign “Coca-Cola is flooding our oceans with plastic”

Greenpeace has begun a worldwide campaign against Coca-Cola. It is high time that the soft drink multinational acknowledges responsibility for its contribution to plastic soup and sets a sustainable course.

India: 13 years after shut down of bottling plant in Kerala, villagers allege they don't have clean drinking water, waiting for justice for effects of pollution

In March 2000, Coca Cola, under its Indian subsidiary Hindustan Coca Cola Beverages Private Limited (HCCBPL), commenced operations at its bottling plant at Plachimada, in the southern state of Kerala. Over the next few years, the area surrounding the plant allegedly began to feel the plant’s hazardous effects, as groundwater was contaminated and toxic waste released.

On 17th August 2015, local authorities discovered a leakage of diesel into the Kelani river, the source of drinking water for millions of Sri Lankans. Water supply in several parts of Sri Lanka including its commercial capital Colombo had to be suspended.

Coca-Cola is one of the most recognizable brands in the world. The company claims to adhere to the "highest ethical standards" and to be "an outstanding corporate citizen in every community we serve". Yet Coca-Cola's activities around the world tell a different story.

Protest at U starts campaign against Coca-Cola’s water use

A group of demonstrators gathered Friday at Coffman Union to protest what it believes is The Coca-Cola Company’s harmful foreign water practices.

Nike and Coca-Cola are among the major companies and business groups lobbying Congress to weaken a bill that would ban imported goods made with forced labor in China’s Xinjiang region, according to congressional staff members and other people familiar with the matter, as well as lobbying records that show vast spending on the legislation.

Coca-Cola management in the Philippines is using COVID-19 as a pretext to target and dismiss union leaders at the San Fernando plant in Pampanga province, according to the International Union of Food, Agricultural, Hotel, Restaurant, Catering, Tobacco and Allied Workers' Associations (IUF).

The company is aware that children participate in the garbage collection. However, it does not appear that it has taken strict measures to avoid it, even though the company in principle opposes the direct or indirect use of child labor in its supply chains.

More than 600 workers go on strike after Coca-Cola announced it was selling its bottling interests in China. Separately, Sony factory workers in Guangzhou have halted production for two weeks in protest at the sale of the Huanan subsidiary to a Chinese company.

The strikers said that their salaries range from 500 to 1200 Egyptian pounds ($65-$157) only, which according to the workers is an insufficient amount that is incompatible with the price hike in Egypt and the effort put by distribution workers in the job.

Coca-Cola (KO) soda began in 1886 when Atlanta pharmacist Dr. John S. Pemberton created the now-famous soft drink, which was sold in the soda fountain of a pharmacy.

Subsidy Tracker is a project of Good Jobs First in Washington DC. It is the most comprehensive source of data on state and federal subsidies in the United States. For more details, click on the links.
Click here for details of subsidies received by Coca-Cola.
Tax Havens

How did Coca-Cola pay a tax rate of just 1.4% in Ireland?

The Government points out that the tax rules here have changed – but with corporate tax receipts soaring as the big players move more assets here, there is no doubt that Ireland remains firmly in the spotlight.

Coca-Cola has been evading taxes through accounting practices that allow the company to shunt profits overseas, a tax court judge has ruled.

When Coca-Cola benefits from “tax gifts” earned in the Free Economic Zone of Manaus in Brazil, as we have shown, and it remits profits to the United States to the “administrative” head office registered in Delaware, the transnational beverage company benefits twice from billionaires tax maneuvers.

Coca-Cola Co KO.N thought it had a deal with the U.S. Internal Revenue Service on how much the company charged foreign affiliates for the rights to make and sell Coke products abroad.

The Cayman-based Conco is one of more than 25 entities located in tax havens – just over 30 percent of the company’s total “financial” subsidiary disclosures, exposing a strategy explained by the company in the annual report as “tax planning.”

Coke claims to give back as much water as it uses. An investigation shows it isn’t even close

When Coca-Cola announced plans earlier this year to recycle the equivalent of 100 percent of its packaging by 2030, the company touted the effort as building on its success with sustainable water use.

Across Africa, Coke is empowering women — to sell Coke products

Last year, Coca-Cola announced a $100 million partnership with the International Finance Corporation to provide business skills training and micro-loans to “empower” women — those who sell Coca-Cola products, that is.

Coca Cola has decided not to pursue the expansion of its bottling on grounds of inordinate delay in receiving environmental clearances, however, activists campaigning against the expansion said the Coca Cola was "forced to abandon".

Some here call the Mlalakua River by a different name: the Coca-Cola River. The nickname comes from the red-brown hue of the water. But it may also reflect the fact that among those factories that line the river’s banks is a Coca-Cola bottling plant, one of three in Tanzania.

Coca-Cola contracts with the U.S. Federal Government (via USA Spending)