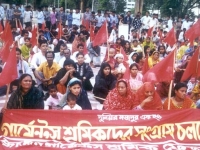 It's been a rough few months in public relations for Walmart. The retail giant faces charges of bribery and corruption in Mexico, lawsuits from contract warehouse workers in the U.S. alleging wage theft and a coordinated walkout in the U.S. on the busiest shopping day of the year.

Perhaps most damaging of all is the increasing scrutiny over Walmart's ties to a garment factory in Bangladesh where 112 workers were trapped and killed in a fire in late November 2012. The company, which buys $1 billion in garments from Bangladesh each year, initially tried to deny any connection.

The fire, which was the worst industrial accident to date in the South Asian country, has also drawn international attention to lack of oversight over unsafe working conditions in a country that is rapidly climbing up the ladder of the global supply chain of contractors and sub-contractors that produce goods for multinational retailers. Indeed, since 2006 over 300 people have died in similar factory fires in Bangladesh.

The blaze broke out during a late-night shift at a factory owned by Tazreen Fashions Limited, on the outskirts of Dhaka city. Tazreen is a subsidiary of the Tuba Group, a textile manufacturer based in Bangladesh, that produces clothes for Hong King-based Li & Fung, the world's largest supplier. Workers were sewing T-shirts and polo shirts for the U.S holiday rush.

"Managers told us, 'Nothing happened. The fire alarm had just gone out of order. Go back to work,'" said Mohammad Ripu, a worker at the factory told the USA Today newspaper. "We quickly understood that there was a fire. As we again ran for the exit point we found it locked from outside, and it was too late," says Ripu who says that he eventually escaped by jumping out of a second-story window.

The main exit of the building was locked, and there were no emergency exits, fire inspectors said. The fire extinguishers that hung on the walls were empty, surviving workers said, merely props used to pass safety inspections.

The workers who were not evacuated by firefighters burned to death or succumbed to smoke inhalation. Some panicked workers broke upper level windows and jumped to their deaths. Others were trampled. Bangladeshi media outlets reported that at least 100 people were taken to a hospital to be treated for injuries.

Labor historians have compared the Tarzeen tragedy to the Triangle Shirtwaist Factory fire in New York city in 1911 that killed 146 workers. "Global outsourcing has allowed retailers like Gap and Walmart to turn back the clock to 1911, recreating in places like Bangladesh the brutal conditions and rock-bottom production costs that prevailed in the U.S. at the time of the Triangle fire," said Scott Nova, executive director of the Workers Rights Consortium, an NGO that monitors international labor rights.

At first, Walmart - along with Disney and Sears - denied that Tazreen produced merchandise for their companies at the time of the fire. The companies stated that due to the long and complex chain of manufacturers, vendors and middlemen that make up the global supply chain, it was difficult to keep track of where their products were being made.

However, most international retailers that do business with suppliers overseas typically do have contract clauses that require suppliers to disclose all factories and subcontractors who produce goods. The Tazreen factory appeared to have such links with Walmart, according to documents posted on the Tuba Group's website.

In fact, the factory was inspected in May 2011 by an independent "ethical-sourcing" assessor hired by Walmart and given a high-risk safety rating. In August 2011 a follow-up inspection garnered a medium-risk rating. Tazreen workers continued to sew clothes for at least three of Walmart's suppliers that year, the documents show.

After the inspection documents came to light, Walmart issued a public statement saying that the Tuba Group had subcontracted Tazreen without their knowledge "in direct violation" of Walmart policies. "We have terminated the relationship with that supplier," said Walmart's spokesperson Kevin Gardner in November. "The fact that this occurred is extremely troubling to us, and we will continue to work across the apparel industry to improve fire safety education and training in Bangladesh." Walmart also said that it stopped working with 49 factories in Bangladesh in 2011 because of safety issues.

Those words rang hollow days later, when Bloomberg news service uncovered documents that showed that at an April 2011 meeting in Bangladesh between retailers, factory owners and government officials and NGOs, Walmart took the lead in blocking a proposal that global retailers help pay for safety improvements at the factories that produce their products.

"Specifically to the issue of any corrections on electrical and fire safety, we are talking about 4,500 factories, and in most cases very extensive and costly modifications would need to be undertaken to some factories," Walmart and Gap representatives stated in a document that was included in the meeting minutes. "It is not financially feasible for the brands to make such investments."

Gardner told the New York Times that the company official's remarks in Bangladesh were "out of context."

"Walmart has been advocating for improved fire safety with the Bangladeshi government, with industry groups and with suppliers," he said.

But Nova - who attended the April 2011 meeting - was deeply critical of the company's claims. "Walmart's global labor rights monitoring program is a public relations scam put in place to address public relations problems arising from their use of sweatshop labor," Nova said.

He added the cost of bringing the factories up to code would cost "a small fraction" of what Walmart and other retailers pay for the clothing they import from Bangladesh each year.

Today garment manufacturing supplies 80 percent of Bangladesh's export income  - some $20 billion a year mainly from the U.S. and Europe - generated by over 4,000 garment factories in the country, up from 47 in 1982.

In fact Bangladesh now exports more garments than any other country in the world besides China - and the boom is not over. In early November last year, representatives from 20 brands and retailers, including Foot Locker, Target and Walmart met with the Bangladesh Garment Manufacturers and Exporters Association to discuss sourcing from its factories.

The reason for this explosion in Bangladeshi garment exports is because it offers some of the lowest salary levels in the world - minimum wage in the country is now $37 a month, or around 21 cents an hour.

Another factor that draws multinational retailers - say union organizers  - is that labor laws favor employers heavily over workers. For example, in Bangladesh, garment workers do not have the right to unionize, and a special police unit, known as the Industrial Police, is assigned to monitor and prevent labor unrest.

Activists point out that workers are not necessarily opposed to the presence of these factories - but would like to see them meet work safety standards and improved work conditions. Kalpona Akter, an organizer with the Bangladesh Center for Worker Solidarity, notes that some of the factories have upgraded under pressure from Western apparel makers.

"We want buyers to stay and use their power to ensure factories treat workers decently," said Akter. "Walmart did not have to leave, because they had the power and the money to make the factory safe."

There is room for hope - after all the Triangle fire is often cited as one of the key incidents that helped the U.S. labor movement to push for and win workplace safety improvements almost 100 years ago.