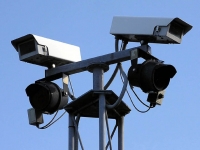 Emails released under the Freedom of Information Act show that the U.S. Immigration and Customs Enforcement (ICE) has tapped into car license plate surveillance data gathered by Vigilant Solutions, based in Livermore, California, and the Irvine Company, a real estate business based in Newport Beach, California, despite previous denials.

Vigilant Solutions sells Automated License Plate Readers (ALPR) cameras to a variety of users from malls to police departments. These readers take time-dated photographs of vehicles at specific locations. This data is then fed into an investigative data platform known as CLEAR, created by Thomson Reuters, the company that also owns Reuters news agency.

Last July, the Electronic Frontier Foundation (EFF), a non-profit focused on preserving rights in the digital age, published a report titled: “California Shopping Centers Are Spying for an ICE Contractor” that revealed that Vigilant cameras were being deployed at shopping malls owned by Irvine Company in some rather unusual locations in Orange County.

The company claimed that the principal use of this technology was merely intended to better understand the shopping habits of mall customers.

At the time, EFF reported that the “extremely broad” published policies of both the Irvine Company and that of Vigilant Solutions did not show restrictions on the use of the data. “My worry has been that this will be used to track suspected undocumented people in real time, that it may be used to identify visitors to places that are frequented by undocumented immigrants … or if they find one person who is undocumented, they use the system to reveal their entire network,” Dave Maass of EFF told the Guardian newspaper.

The Irvine Company responded to the online reports with a deliberately vague statement. “Vigilant is required by contract, and have assured us, that ALPR data collected at these locations is only shared with local police departments as part of their efforts to keep the local community safe,” the company wrote in a public statement.

But as far back as 2014, the ACLU had tracked down internal reports from the U.S. Department of Homeland Security, showing that ICE had run tests on Vigilant Solutions databases to track down undocumented migrants with the help of license plate data.

More details were released in 2017 when Thomson Reuters published details of the $6.1 million CLEAR contract with ICE providing over 9,000 ICE personnel access to the database that now holds over 5 billion records and points of data. The contract runs until 2020.

In a press release issued last June, the company stated: “As part of an investigation of suspected criminal activity, law enforcement can leverage CLEAR to research people and organizations connected to the vehicle. Additionally, CLEAR LPR subscribers will have access to LEARN, Vigilant’s investigative data platform, which provides users with insights, including: vehicle location, year, make and model search; the best location to find a vehicle; vehicle detection sharing; and the ability to virtually stakeout a vehicle location.”

In an effort to get more details on the nature of the contract, ACLU made a Freedom of Information Act inquiry in March 2018 to get more details about exactly what records were shared between the license plate contractors and ICE. When the emails were turned over in March of this year, their suspicions were proved correct: ICE officials had acquired ALPR data from Irvine Company malls.

“ICE has long embraced technology to target immigrants,” wrote Vasudha Talla, the ACLU lawyer who brought the lawsuit. “Now it’s taking surveillance to an unprecedented level to target vulnerable communities — and sweeping up everyone else in the process. It’s time to take back control of our information and make sure our communities aren’t collaborating with ICE.”

“Surveillance technology is a big business, and companies who build it have an interest in collecting data from one customer and making it available to their other customers,” Matt Cagle, an attorney with the ACLU of Northern California, told CityLab last year. “I think one of the key lessons here is that surveillance that happens locally doesn’t necessarily stay local.”

However, the newly released emails also showed that the alarms raised by the ACLU and EFF last year likely had a positive impact because the Irvine Company ended its ALPR program two weeks after the EFF published its initial article covering the company. (An Irvine Company spokesman claimed the decision to cancel was a business one.)

Of course ALPR technology has also been used against non migrants. In 2014 a Florida police officer lost his job when an internal investigation found that he was looking through an ALPR database at individuals not suspected of committing a crime. These individuals included movie stars, local news anchors, and ordinary citizens, sometimes looking individuals up more than once. Documents published by NBC2 News show that the officer “searched a Collier County woman 34 times and her husband five times.”

Yet another problem is hacking. In 2015, an EFF investigation found one hundred ALPR cameras that had been compromised. Indeed EFF was even able to gain access to five of them from the open Internet that allowed anyone to type in a public URL to view a camera’s live video stream and witness the plate captures in real time.

Not least is the fact that companies can use this data to target poor people. For example auto insurance and repossession companies are big collectors and users of this license plate data. One common use of the technology is to find out if a car spends a lot of time in high crime neighborhoods, which could cause the owner to be charged more for insurance.

Although a car insurance company may see this data as beneficial, privacy experts say this places an extra burden on families struggling financially who live in lower income neighborhoods which often have high crime rates. "I would definitely be concerned with insurance companies getting access to this,” Jennifer Lynch, an EFF attorney, told the Syracuse Post-Standard newspaper.