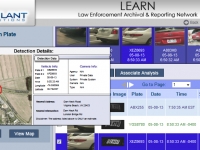 Local government officials have the ability to track individual drivers in the U.S. in real time and take pictures of the occupants of their vehicles, with new "truly Orwellian" technology purchased from companies like Vigilant Solutions, according to new documents uncovered by the American Civil Liberties Union (ACLU).

One of the documents is a ten page U.S. Drug Enforcement Administration (DEA) memo stating that the technology behind the National License Plate Reading Initiative that was launched in December 2008 allows it to capture "vehicle license plate numbers (front and/or rear), photos of visible vehicle occupants [redacted] and a front and rear overall view of the vehicle." Another May 2011 memo notes that this system has the ability to store "up to 10 photos per vehicle transaction including 4 occupant photos."

These details complement findings by the Wall Street Journal that the U.S. Department of Justice has built a secret national database to track vehicle license plates around the country that now holds "hundreds of millions of records about motorists."

While the program was originally designed to catch drug traffickers, it has now become a routine way for government agencies to find anyone that they suspect is associated with a crime. "Many state and local law-enforcement agencies are accessing the database for a variety of investigations, putting a wealth of information in the hands of local officials who can track vehicles in real time on major roadways," writes Devlin Barrett in the Journal.

A December 2013 memo from the Milwaukee police explains how such technology works and the "standard operating procedures" for the use of the data gathered.

"(M)anufacturers and law enforcement agencies have argued that images of license plates cannot be used to identify individuals, and thus do not infringe on our individual privacy," writes Sonia Roubini of the ACLU in an article that explain the significance of the newly released memos. "This argument is thin already, but it certainly doesn't fly with regards to photographs of the driver or passengers inside of a vehicle - especially in the era of face recognition analytics."

The ACLU says that the biggest vendor of automatic license plate recognition technology is Vigilant Solutions, based in Livermore, California. The company has been quite open about the fact that it operates the Law Enforcement Archival and Reporting Network-National Vehicle Location Service that now holds some two billion records, and adds some 100 million records every month.

"The new Vigilant Mobile Companion app improves the return on investment that agencies are seeing from their investments in license plate recognition and facial recognition technologies by expanding the benefits out to everyone in the agency - patrol, investigative, detention, and other areas," the company writes. "In addition to the license plate recognition capture and analytic tools, the app also features Vigilant's powerful FaceSearch facial recognition which analyzes over 350 different vectors of the human face. The FaceSearch element of Mobile Companion allows officers in the field to snap a photo of a willing subject and have their face matched against a gallery of over 13 million pre-populated mugshot and registered sex offender images as well as any other images that the agency uploads into its own gallery."

But the ACLU points out that if such as system is used to track occupants of all vehicles rather than just willing subjects, it would violate laws on privacy.

"In a democratic society, we should know almost everything about what the government's doing, and it should know very little to nothing about us, unless it has a good reason to believe we're up to no good and shows that evidence to a judge. If you aren't the subject of a criminal investigation, the government shouldn't be keeping tabs on when you go to the grocery store, your friend's house, the abortion clinic, the antiwar protest, or the mosque," adds Kade Crockford, also at the ACLU. "Unfortunately, that basic framework for an open, democracy society has been turned on its head. Now the government routinely collects vast troves of data about hundreds of millions of innocent people, casting everyone as a potential suspect until proven innocent. That's unacceptable."

Other companies that operate in this field include MorphoTrust USA, owned by Safran from France which sell facial recognition techology to local governments. Another company named Palantir, based in Palo Alto, California, sells database analysis technology.