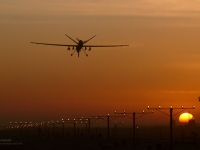 U.S. Air Force officials has begun to hire private companies to fly drone aircraft operating over Afghanistan, Iraq and Syria. The unprecedented move is in response to demands from the Obama administration to dramatically expand the drone war just as the Pentagon faces a critical shortage of military pilots.

As a result, civilian pilots will directly participate in military operations for the first time since the drone wars began about a decade ago. According to the Los Angeles Times, the Air Force signed contracts with two private companies in 2015 to provide enough pilots to fly two "combat air patrols" or 24-hour surveillance flights that would involve as many as eight MQ-9 Reaper drones per day. The Air Force plans to eventually expand its fleet of privately piloted drones to 40 over the next four years.

Of the two companies, one, Aviation Unmanned,  is a small, veteran-owned outfit operating out of Dallas, Texas, which was awarded a contract on August 24. The second is General Atomics, a large San Diego, California-based military contractor that builds both the Reaper and Predator drones and has been paid at least $700 million over the last two years for a variety of drone support services. Their contract was awarded April 15.

This is not the first time that private contractors have played a role in the drone wars. Companies such as Booz Allen Hamilton, General Dynamics and SAIC  have long held contracts to analyze surveillance data gathered by drones flying over war zones.

While Reaper drones are designed to be able to carry multiple Hellfire and Sidewinder missiles, the Pentagon insists that these privately operated Reapers will simply do reconnaissance and not carry weapons, nor will the pilots have clearance to fire missiles.

Nonetheless, these contracts mark a dramatic uptick in the direct involvement of private companies in military actions, which has drawn criticism even from within the Air Force Judge Advocate General's office who say that such involvement may be a violation of international law. "Military services should be vigilant to avoid contracted intelligence activities where civilians may exert a significant amount of influence or control over targeting and weapons release decisions," wrote Major Keric Clanahan, a legal advisor to the U.S. Special Forces, in a recent article in Air Force Law Review. "It is imperative that contractors not get too close to the tip of the spear."

The decision to deploy private drone pilots stems from a longstanding crisis inside the U.S. military In early 2015, the Air Force operated 65 combat air patrols, or up to 260 drones patrolling war zones around the world, but was under pressure from the  Pentagon to expand the number of drones in the air to 360. But pilots, overwhelmed by the complexity of the work and the grueling schedule, began to vote with their feet and quit.

At an October conference of military contractors and government officials, General Robert Otto, the Deputy Chief of Staff for Intelligence, Surveillance and Reconnaissance, summed up the problem. "Those crews have been stressed about to the limit," Otto said. "Over time, pulling twelve hour shifts, six days a week, year after year, and the only light at the end of the tunnel is their Form DV-214, which their, you know, separation from service. And many of the pilots have decided to take that option."

This summer, the Air Force was forced to reduce the number of combat air patrols from 65 to 60, in order to keep its remaining pilots from retiring at the end of their contracts. Nonetheless, the Air Force projects that it will be 400 pilots short of the roughly 1,200 it needs to keep the drone program running at current capacity.

Officials hope that the private contractors, along with additional support from Army drone pilots, will fill the gap in the short term. But over the long term, the problem of keeping a fleet of pilots in the service is expected to get substantially worse.

According to a separate Los Angeles Times article, the Air Force recently announced plans to radically expand its global drone operation, adding 65 new Reapers to its fleet, doubling the number of pilots, and building new drone operations centers at Air Force bases around the U.S. The plan is expected to cost roughly $3.5 billion, and the service will have to get Congressional approval before conducting the expansion. Even if lawmakers go along, training new pilots and building the new drone centers will take years. It will be a long time before the service's current pilots see any relief, so the contractors may well be called upon again to fill an ever-widening gap.