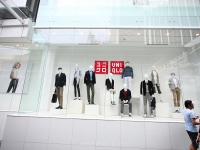 Chinese factories in Dongguan and Guangzhou that supply UNIQLO - a "fast fashion" label owned by Fast Retailing Co. from Japan - have been accused of endangering their workers' lives, according to a new report from Students and Scholars Against Corporate Misbehavior (SACOM), a Hong-Kong based labor rights group.

SACOM worked with Labor Action China (LAC) and Human Rights Now (HRN), a Japanese non-profit, to conduct research on two UNIQLO suppliers in 2014 - the Luen Thai factory in Dongguan and Pacific Textiles factory in Guangzhou. The report revealed that excessive working hours, low basic wages, unsafe working environments and harsh punishments for workers were rampant in both factories.The activists say that Fast Retailing needs to do a better job of supervising working conditions in their factories.

"UNIQLO is an international brand, not just a Japanese brand. I don't think UNIQLO can tolerate defects in its clothing," Alexandra Chan Hiu-ching, project officer for SACOM, told the Associated Press. "I think UNIQLO should have high standards for its factory conditions as well."

The report is an indicator of an increasingly assertive labor movement in China. Over 1,000 strikes and protests were reported between June 2011 and the end of 2013 in China, of which 40 percent were conducted by factory workers. And in 2014, 40,000 workers in Yue Yuen shoe factories, the world's largest shoes manufacturer for big brands like Adidas and Nike, went on strike to demand (successfully) that their employers in Shenzhen make pension payments required under the law.

Pacific Textiles supplies textiles to garment factories while Luen Thai makes clothes for global apparel and accessory companies. Both are headquartered in Hong Kong. The first company offers its workers a basic monthly pay of RMB 1550 ($246) while the second offers RMB 1310 ($208) which are the minimum wage levels for the cities they work in.

In addition, workers are paid bonuses by the piece, so most put in as many hours as they can in order to earn as much as possible, even though they are not forced to.

On an average, workers at Pacific put in 134 hours of over time while workers at Luen Thai put in 112 hours every month, despite the fact that China's Labor Law stipulates that overtime should not exceed 36 hours a month.

The researchers said that overtime work was recorded manually on paper at Luen Thai rather than on the regular computer system. "It can be seen that factories can avoid being checked by the social auditors on workers' working hours in this way." SACOM said in its online statement.

Also not all workers are paid their full due since Pacific only pays 1.5 times of the basic wage for overtime pay on weekends, despite the fact that Chinese law requires double pay for weekends, according to SACOM.

As a result, UNIQLO contract workers made quite a bit less than the average actual wage for workers in Dongguan and Guangzhou who earn salaries of RMB 2,505 ($398) and RMB 5,808 ($924) respectively.

SACOM reported that both factories maintained very high temperatures inside their facilities. At Pacific, the average temperatures recorded at the textile workshop was 38 Celsius (100 F) during the summer.

The dyeing workshop recorded temperatures ranging from 38 to 42 Celsius (100-107 F). Workers were also required to stand very close to the dyeing tanks which operate at 100 to 135 Celsius (212-275 F). These tanks have no protective enclosures to prevent workers from coming into contact with the chemicals.

The activists also reported that workers in the ironing department at Luen Thai are required to stand (ostensibly to maintain morale) while operating irons at 200 Celsius (392 F).

Photos published in the report show male workers working topless in order to deal with the heat. Workers describe the factories as "hell" and said that some of their colleagues "fainted in summer because it is too hot." (Workers are given a high temperature allowance of 7 RMB ($1.11) a day.)

In addition, SACOM claims that factory floors are routinely awash in chemical-laden wastewater. Workers reported that one of their colleagues was electrocuted at the Pacific factory after machinery came into contact with the water, killing him.

The researchers alleged that the workers are exposed to textile process dusts that can cause byssinosis, occupational asthma and respiratory irritation which can be lethal in the long-term. Even worse, dense concentrations of dust have been known to spontaneously combust under very dry conditions. (In 1987, 47 died and 179 were injured in a blast at a linen mill in Harbin in northeastern China.)

Workers are also allegedly exposed to hazardous chemicals. Pacific's dyeing workshop uses solvents like A569 PTEG and A203 PT200, both of which are irritants to human eyes and skin. While the factory does provide safety masks, gloves, and special suits, some workers reportedly did not use these protective gear because of the hot temperatures that they have work under.

"The factory does have many policies, but it is another matter that whether these policies are carried out," SACOM researchers wrote. "Some workers do not wear (these protection) because it is not convenient to work (with them). They are not aware of the danger of the chemicals during the dyeing process."

Fast Retailing claims that it has a strict quality inspection system. UNIQLO has a team of technical specialists known as the Takumi team who are regularly dispatched to partner factories in China to provide technical instruction. Supervisors from the Fast Retailing production department in Shanghai also make weekly visits to partner factories to check up on the quality and progress of production.

A sewing worker confirmed that the Japanese company is very strict about their products to SACOM. "Once they find any defect, they scold the director of the workshop," the worker said. "And then the director immediately scold the workers."

But this is mostly a show, the activists say. Luen Thai workers told SACOM that whenever Fast Retailing representatives arrive to conduct inspections, the workers are "all required to wear a complete set of protection equipment, and also have to clean the factory workshops." When the inspection team leaves, the factory managers resume their old ways.

In addition, SACOM reported that factory managers rely heavily on a system of fines to control product quality and to manage workers. Pacific management list 58 different punishments that can be meted out to workers for violating rules - of which 41 are fines. Any fabric defects produced in the knitting department or even a stain on the knitting machine is punishable with a 50-100 RMB ($7.98-15.96) fine, which is equal to a whole day's bonus. Workers caught napping also forfeit their daily bonus.

This fine punishment system is not included in the workers' manual thus making it illegal under China's Labor Law which requires that all rules regarding payment and welfare be discussed with workers' representatives. Indeed Guangdong local labor inspection rules requires that the local Department of Human Resources and Social Security must investigate and ban illegal fines.

SACOM says that the root of the problem is that Pacific and Luen Thai workers do not have proper representation and thus cannot bargain with the factory managers. At Pacific, the workers' union is led by the factory administrative director, which is illegal under China's workers' union law. At Luen Thai, there is no workers' union at all, just a workers' committee that supplies "entertainment and welfare."

When over a dozen workers went on strike several years ago to protest the high temperatures in the workshops, the factory fired the organizers. And when workers in the manufacturing workshop went on strike in 2009 to demand higher salaries, the factory hired thugs to beat up the leaders of the strike, according to the report.

After the report was published this past January, Fast Retailing claims that it "moved quickly" to conduct its own inspections of the factories. The company confirmed the long working hours but said it was not able to verify other issues stated in the report.

"Fast Retailing has urged swift action against the factories on the issues identified in the SACOM report, and we will cooperate fully with them to ensure that improvements are made," Yukihiro Nitta, CEO of Fast Retailing group said in a statement.

"We demand Fast Retailing to facilitate the suppliers on the improvement in the working conditions by providing adequate resources, and to support the set up of fully worker-represented trade union in their suppliers by direct and democratic election," SACOM said in a response to the company statement. "We want Fast Retailing to comply strictly to their corporate social responsibilities policies."