Trafficking Lawsuit Against KBR for Wrongful Deaths in Iraq Dismissed 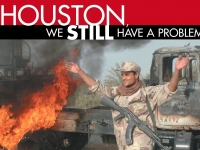 Families of 12 Nepali workers killed in Iraq in August 2004 have been denied permission by a federal judge to sue Kellogg, Brown & Root (KBR), the former subsidiary of Halliburton of Houston, in an abrupt reversal of a previous court decision.

The families say the workers were recruited by Daoud & Partners in Jordan to work in a luxury hotel in Amman and promised salaries of $500 a month. After arriving in Amman, the men were taken to Iraq in an unprotected caravan of vehicles on August 17, 2004 to work at the Al Asad base for KBR.

Before the Nepalese arrived at the base, they were ambushed and kidnapped by a group of armed men. On August 31, the captors sent out a video message showing the execution of the one of the 12 men with a message: "We have carried out the sentence of God against 12 Nepalese who came from their country to fight the Muslims and to serve the Jews and the Christians . . . believing in Buddha as their God." The bodies of the men were never found.

In August 2008, a lawsuit against KBR and Daoud & Partners was brought by Cohen, Milstein, Hausfeld & Toll - a Texas law firm - on behalf of the families of the 12 men under the Trafficking Victims Protection Reauthorization Act of 2008. The families were joined by Buddi Prasad Gurung, a Nepali worker in the original convoy, who escaped by virtue of being in a different vehicle.

Last September, Keith Ellison, a judge of the U.S. District Court of the Southern District of Texas, stated that he would accept the case because the evidence offered "raises a genuine issue of material fact as to the existence of forced labor or trafficking" and set a trial of April 14, 2014.

"This brings justice one step closer for the survivor and the families of those who died as a result of the human trafficking," said Agnieszka Fryszman, the lead attorney with Cohen Milstein, at the time. "The families are looking forward to proving their case at trial."

But on January 15, Ellison issued a new order dismissing the case, stating that he had made a mistake, and ruling that the Trafficking Victims Protection Reauthorization Act (TVPRA) could not be applied retroactively to incidents before it was made law in 2008.

The workers families have also been denied justice by the U.S. Department of Defense which announced in April 2006 that an investigation had "concluded that the U.S. Government had no jurisdiction over the persons, offenses, or circumstances that resulted in the Nepalese deaths."