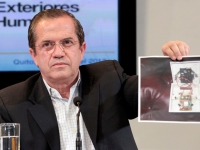 Spy equipment from the Surveillance Group Limited, a British private detective agency based in Worcester, England, has been found in the Ecuadorean embassy in London where Julian Assange, editor of Wikileaks, has taken refuge.

At a press conference in Quito this afternoon, Ricardo PatiÃ±o, the foreign minister of Ecuador, held up a photo of a "spy microphone" that was found on June 14 inside a small white box that was placed in an electrical outlet behind a bookshelf. The device contained a telephone SIM card allowing it to broadcast any conversations that it picked up.

"We are requesting backing from the British government to continue with the investigation of the device found," PatiÃ±o told reporters.

The device was discovered by embassy security staff just two days before PatiÃ±o met with Assange to discuss his predicament. It coincided with revelations from Edward Snowden, a former U.S. Central Intelligence Agency (CIA) staffer, of the extent of U.S. National Security Agency global surveillance on ordinary citizens.

Nobody has yet come forward to claim the device and the company has
denied any role. "The Surveillance Group do not and have never been
engaged in any activities of this nature," said Timothy Young, the
company CEO in a press statement issued Thursday. "This is a wholly
untrue assertion."

However a casual web search reveals that the Surveillance Group boasts of its ability to install tracking devices anywhere.

"We can justifiably claim to be the only company in the world to offer an internationally accredited, covert camera construction, concealment and deployment course," a company website claims. "We can provide a range of bespoke, unmanned, covert camera options to gather vital video evidence in the most challenging environment or scenarios. The cameras can further be supported by the use of micro tracking devices for deployment with customer property or vehicles."

Bugging places is just one of the services that the Surveillance Group provides to corporations and police forces.

"We are the acknowledged experts in providing Professional Witness surveillance to the police and local authorities in relation to drugs, prostitution, gang violence, hate crime and antisocial behavior," the company says on another page on its website.

"Our work in this arena includes the detection of malpractice by employees relative to the passing of confidential company information or the infringement of restrictive covenants and breaches of contract."

Company web pages show pictures of hooded youth smashing store windows as well as testimonials from companies like Nike who congratulated them on helping find addresses of vendors selling counterfeit goods: "I am extremely impressed with the service provided by the team at The Surveillance Group and would definitely recommend them for brand protection work," Chloe Young, a Nike official was quoted as saying.

However the company appears to have completely failed to foil the plans of Julian Assange and Edward Snowden, which were likely hatched in the very building that was being bugged and most certainly did not dissuade them from launching a daring international escape for the former spy, that was worthy of Hollywood.

On June 23 Wikileaks staffer Sarah Harrison spirited Snowden out of Hong Kong - where he had been staying - to Moscow, taking the intelligence agencies by surprise.

The listening device is not the only way that Ecuador suspects that it is being monitored. An article in the Wall Street Journal last week quoted extensively from email correspondence between aides of President Rafael Correa, revealing that someone was hacking internal government communications.

"I suggest talking to Assange to better control the communications," the newspaper quoted Nathalie Cely, Ecuador's ambassador to the U.S. in a message to presidential spokesman Fernando Alvarado. "From outside...[Assange] appears to be 'running the show.'"

The Journal said that it obtained the emails from Univision Networks, a U.S. based Spanish TV network, but Wikileaks says that the U.S. government could well have provided them with the raw material.

It should be noted that a number of private vendors around the world provide technology to hack email communications for "lawful interception" purposes.

These incidents have stirred deep anger among government officials in Quito.

The Ecuadorian government is being "infiltrated from all sides," said Patino. "This is a testament to the loss of ethics at an international level in the relations that we have with other governments."

However, the interception of emails from South American governments appears to have been just as useless as the bugging at foiling Snowden's plans. On July 2, the U.S. government sparked a diplomatic crisis by attempting to block a flight by President Evo Morales of Bolivia, under the suspicion that he was transporting Snowden. Morales was detained at Vienna airport for 14 hours but eventually completed his journey.

"Sieging/bugging
of Ecuador's London embassy and the blockading of Morales jet shows
that imperial arrogance is the gift that keeps on giving," tweeted Wikileaks.