Samsung Sued for $109 Million For Labor Violations in Amazon 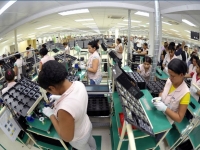 Samsung, the South Korean electronics giant, faces a 250 million real ($109) million fine for working condition violations at a plant in the Zona Franca (free trade zone) of Manaus, the capital of Amazonas state in Brazil, that were discovered during two inspections in May 2011 and May 2013.

The city of Manaus, which is located at the confluence of two major tributaries of the Amazon, was founded by rubber tappers in the late 19th century. Despite its distance from the major coastal cities of Brazil and lack of major road or rail links, it has prospered partly because of special economic incentives that date back to 1957.

Some 120,000 people work in a special "free trade" hub, with another 500,000 of the city's population of two million, employed in ancillary industries. Companies that set up factories benefit from virtually free land and zero excise duty. They also get between 55 and 100 percent waivers of value added tax and pay as little as 12 percent of standard Brazilian import taxes.

The Samsung's factory assembly line in Manaus employs 6,000 workers who are expected to put together a mobile phone in 32 seconds and a television set in 65 seconds, according to a lawsuit lodged against the company by Brazil's labor ministry. Shifts sometimes last 15 hours and one employee was ordered to work 27 days at a stretch.

"The subjection of workers to 15-hour days is unacceptable, especially in a company the size of Samsung," said Luiz Antonio Camargo de Melo, the Brazilian attorney general for labor who brought the suit. "Putting things into perspective, (the 250 million real) is equivalent to what the defendant makes as a profit around the world in less than two days."

Camargo de Melo has also asked the company to give employees a 10 minute break every 50 minutes.

The company has said that it will look into the allegations. "We are committed to offering our collaborators around the world a work environment that ensures the highest standards when it comes to safety, health and well-being," Samsung stated in a press release.

Samsung, which is the largest producer of computer chips, liquid crystal displays and smartphones in the world, has been accused several times of poor labor practices at its factories in several countries.

For example a South Korean activist group called Supporters for the Health And Rights of People in the Semiconductor industry (SHARPs) - made up of independent labor unions, human right groups, occupational safety and health (OSH) groups, progressive political parties, and workers' organizations - have been campaigning against Samsung after they chronicled the deaths of 10 workers from leukemia and lymphoma beginning in 2005. The victims allegedly fell sick as a result of handling chemicals at their jobs at the company's factories in Gi-heung and On-Yang, South Korea.

In September 2011, Samsung was fined 500,000 real ($214,000) for poor working conditions at a factory in Campinas, SÃ£o Paulo state, Brazil, where supervisors were accused of harassing employees. Samsung is due to report back to the court on its efforts at the Campinas factory this month.

And last year, China Labor Watch, a U.S. based group issued a report alleging that a Samsung sub-contractor - HEG Electronics, in Huizhou, China - was using child labor, based on three investigations conducted between the months of June and July 2012. The researchers claimed that the under age workers were forced to work 11 hours per day, six days a week for 70 percent of the regular pay.