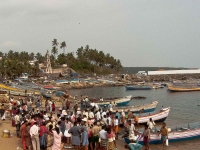 After police arrested protestors that were blocking access to company vehicles attempting to enter the construction site, others stormed a police station on November 27 resulting in 80 people being injured. The clash resulted in a truce after Pinarayi Vijayan, the chief minister of Kerala, met with the Vizhinjam Samara Samithi, the protest organizers.

"The protest has reached a certain stage and if required, they will take it up again," Eugene Pereira, convener of the Vizhinjam Samara Samithi, told the media.

The planned port - a $900 million project in Vizhinjam just south of Thiruvananthapuram, the capital of Kerala - will be the first mega-container 'transshipment' port in India. At the moment, transfers of containers from mega-sized cargo ships to smaller ships have to be done outside India at other ports such as Colombo, Sri Lanka, Dubai and Singapore.

Construction is being spearheaded by the Adani Group, a conglomerate founded by Gautam Adani, India's richest man who is close to Narendra Modi, the prime minister of India. Originally a commodity trading firm, the Adani Group expanded significantly after it built its own port in Mundra, Gujarat, and it is now also active in energy, mining, refining in addition to agricultural commodities and food. (See Cricket Protest Highlights State Bank of India's role in Funding Adani's Australian Coal Megamine.)

Since port construction started, local churches say that over 100 families have lost their homes to the work, and another 1.6 million face a loss of their livelihood because of the construction of a 1,300 meter breakwater that has already changed the pattern of fishing and led to coastal erosion.

Major protests aimed at blocking construction began in July. Most of the protestors are women fisherfolk and many are Christian – indeed 90 percent of the members of the Latin Church, an autonomous branch of the Roman Catholic Church, work in the fishing industry. “This shore is ours,” Joyce, a local fish seller who was taking part in the protest told Article 14. “But the government has abandoned us for Adani.”

The leaders of the Latin Church have backed the struggle and taken part. "I joined this hunger strike even though I am unwell as I strongly feel for the causes of the fishermen,” Archbishop Emeritus Soosa Pakiam told a rally in September. “We will not give up our protest until the government accepts our demands."

The police say that the church has inflamed the situation. A total of 50 priests were named out of 96 individuals on a list drawn up by the police after the November clash - including several senior leaders of the Latin Church, namely Archbishop Father Thomas J Netto, Auxiliary Bishop Father Christudas Rajappan as well as Eugene Pereira, who is a vicar general in the Latin Church.

The clergy deny that the clashes were their fault. "The state government is responsible for the violence. They were doing it to prepare the ground for forcible eviction of the protesters," Pereira told the BBC.

The port project is heavily backed by the Left Demoractic Front, an alliance of left-wing political parties such as the Communist Party of India (Marxist), together with the Indian National League and the Kerala Congress (Mani), that governs Kerala at the moment. "The project is critical for Kerala’s development and needs to be completed at the earliest. We have been receptive to the protesters’ demands and have appealed to them to call off the protests but to no avail,” Ahammed Devarkovil, state ports minister, told India Today magazine.

After the clash at the police station in late November, the Vizhinjam Samara Samithi organizers agreed to dismantle the 140 day protest. Neither the government nor the protestors have ceded on other matters. The chief minister made it clear that construction will proceed, while the activists have continue to demand a study of coastal erosion in the area.