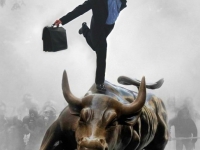 Hedge funds are part of the $2.13 trillion global "alternative investment industry" which invests the assets of wealthy individuals and institutional investors, outside the scrutiny of normal regulation, in the hope of generating outsize profits.

In "More Money Than God: Hedge Funds and the Making of a New Elite" Sebastian Mallaby estimates that hedge funds make some 11 percent profit, more than double any other investment vehicles. The Alternative Investment Management Association estimates even higher average returns of 12.61 percent. In return, fund managers ask for higher fees than regular brokers or bankers - typically between one and four percent of the investment every year as well as between 10 and 50 percent of profits (but not losses).

How do they make so much money? Hard to tell exactly, since hedge funds keep their trading a closely held secret in order to protect their competitive advantage. For example, the managers claim to use mathematical formulas and computer programs as well as smart analysts to look for under-rated stocks or over-priced assets. They then bet in multiple different ways against these discrepancies or even on future events such as a fall in oil prices or a rise in the Euro. (The term hedging refers to an investment to protect against market fluctuations because of unexpected events).

But Gretchen Morgenson, a New York Times reporter, has uncovered a questionable new phenomenon that suggests that "some of the nation's biggest brokerage firms appear to be giving a handful of top hedge funds an early peek at ... research analysts' views - allowing them to trade on the information before other investors get the word." The description of the system suggests that it is a sophisticated - and just barely legal - version of insider trading.

These hedge funds send out surveys to brokers like Citigroup, Credit Suisse, Deutsche Bank, Goldman Sachs, JPMorgan Chase, Merrill Lynch and UBS. "Chief among the questions posed to the analysts are those about possible earnings surprises at companies they follow," write Morgenson. "The analysts' answers are fed into the hedge funds' trading algorithms, determining which stocks to buy or sell."

Marshall Wace, a London based hedge fund, is credited with creating the first "alpha capture system" with the Trade Optimized Portfolio System in 2001. By 2009, it was getting responses from 290 brokerage houses and 1,900 equity sales representatives. Barclays Global Investors set up a similar system in Australia (where the rules are more relaxed) before it was acquired by BlackRock in 2009. Two Sigma Investments created the Portfolio Idea Contribution System.

(There are a number of other alpha capture systems now - such as JayWalk, Repository and Distribution Centre, StarMine and Trade Information Monitor)

One of the BlackRock's surveys asks analysts whether a company's coming profits "are more likely to surprise on the upside or downside." A confidential BlackRock memo from November 2008 explains the reasoning: "We expect the earnings surprise direction to be able to capture the information not released to the market." Another 2009 document is even more explicit: "We are trying to front-run recs," it states.

The companies deny that they are "front-running." James Badenhausen, a BlackRock spokesman, told the New York Times: "The language in the Barclays Global Investors internal memos is sloppy and inaccurate and totally inconsistent."

Trading on inside knowledge to increase profits is illegal in the U.S. Some traders have been caught by the Federal Bureau of Investigation like Raj Rajaratnam, founder of the Galleon Group, who was recently sentenced to 11 years in jail. In early 2012 David Einhorn and his fund Greenlight Capital in the UK, were fined Â£7.2 million ($11.2 million) by the Financial Services Authority for insider trading about a planned 2009 equity issue by Punch Taverns.

Handing out tips is also frowned upon: in 2009, the Wall Street Journal uncovered evidence of a Goldman Sachs analyst named Marc Irizarry who rated mutual-fund manager Janus Capital Group Inc. as a "neutral" in early April 2008. Later that month, at an internal "huddle" Irizarry said that he expected Janus to climb. The following day Goldman staff called some 50 preferred clients like Citadel Investment Group and SAC Capital Advisors, both hedge fund groups, to give them the tip. Less powerful clients had to wait six days for Irizarry's bullish report, by which time the stock had already gained 5.8 percent. The firm was fined $22 million by the Securities and Exchange Commission (SEC).