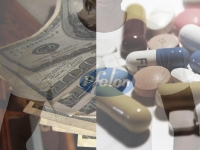 For three years, Pfizer Italy employees provided free cell phones, photocopiers, printers and televisions to doctors, arranged for vacations (such as "weekend in Gallipoli," "weekend with companion" and "weekend in Rome") and even made direct cash payments (under the guise of lecture fees and honoraria) in return for promises by doctors to recommend or prescribe Pfizer's products.

Today, the New York headquarters of the pharmaceutical giant has agreed to pay a total of $60.2 million in penalties to settle the documented charges of bribery. The Securities and Exchange Commission (SEC) says that Pfizer Italy employees went out of their way to "falsely" book the expenses under "misleading" labels like "Professional Training," and "Advertising in Scientific Journals."

The penalty is roughly half a percent of the company annual profits that exceed $10 billion a year on global sales of $67.4 billion in 2011.

Italy was not the only country where Pfizer has been accused of bribing doctors and local officials. "Pfizer took short cuts to boost its business in several Eurasian countries, bribing government officials in Bulgaria, Croatia, Kazakhstan and Russia to the tune of millions of dollars," says Mythili Raman, the principal deputy assistant attorney general of the U.S. Department of Justice's (DoJ) criminal division.

Amy Schulman, executive vice-president and general counsel for Pfizer, said: "The actions which led to this resolution were disappointing, but the openness and speed with which Pfizer voluntarily disclosed and addressed them reflects our true culture and the real value we place on integrity and meeting commitments."

In a criminal complaint issued by the SEC, investigators laid out detailed charges for a total of eight countries: Bulgaria, China, Croatia, Czech Republic, Italy, Kazakhstan, Russia, and Serbia.

For example for almost six years, Pharmacia Croatia made monthly payments of approximately $1,200 per month into the Austrian personal bank account of a Croatian doctor. In 2003, Pfizer bought Pharmacia Croatia but allowed the payments to continue for three months.

A memo from a senior manager noted that the doctors was "a member of the Registration Committee regarding pharmaceuticals, I do expect that all products which are to be registered, will pass the regular procedure by his assistance. . . . He is a person of great influence in Croatia in the area of pharmaceuticals, and his opinion is respected very much; that's the reason he is so important to us."

In Russia, from the mid-1990s through 2005, Pfizer Russia had a special sales initiative called the "Hospital Program" under which employees were allowed to pay hospitals five percent of the value of certain Pfizer products. Some of this money was paid out in cash to individual Russian doctors "to reward past purchases and prescriptions and induce future purchases and prescriptions of Pfizer products."

Government officials were also cultivated. On November 19, 2003, a Pfizer Russia employee sent in an invoice requesting "payment for the (motivational) trip of [the First Deputy Minister of Health] for the inclusion of [a Pfizer product] into the list . . . of medications refundable by the state."

In another email June 27, 2005, a Pfizer Russia employee noted that a government doctor "should be assigned the task of stretching the amount of the purchases . . . to US $100 thousand" as an "obligation" in exchange for a trip to a conference in the Netherlands or Germany.

Federal officials have forced Pfizer to pay much higher fines in the past, based on the damage assessed in each case (typically a multiple of the damages). For example in 2009, Pfizer paid out $2.3 billion to settle allegations of criminal and civil liability arising from the illegal promotion of Bextra, an anti-inflammatory drug.

All told U.S. government regulators are expected to hand out $8 billion in fines this year to multinational corporations, estimates the New York Times. "Critics remain, however, arguing that the practice of settling fraud cases with companies while not charging any employees might be giving executives an incentive to push the limits of the law," notes the newspaper.

Questions are being raised by some members of Congress. "A lot of people on the street, they're wondering how a company can commit serious violations of securities laws and yet no individuals seem to be involved and no individual responsibility was assessed," Jack Reed, a Rhode Island senator, said at a recent hearing.