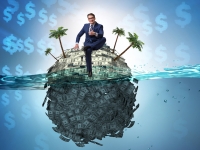 Previous leaks about the world of offshore finance to the ICIJ include the Panama Papers (about the law firm Mossack Fonseca) and the Paradise Papers (about the law firm Appleby as well as services providers Asiaciti and Estera Trust). The Pandora tranche covers 14 'offshore service providers' - none of which are household names for obvious reasons – that are based in Belize, British Virgin Islands, Cyprus, Hong Kong, Panama, Seychelles, Switzerland and the United Arab Emirates.

“When you are that rich, and you are looking for a creative way to hide money, you cannot do it alone,” Lakshmi Kumar, policy director at Global Financial Integrity, told the New York Times. “You need a network of professionals to help you. These people are often people who are meant to safeguard the financial system.”

In essence what the firms do is relatively simple – they set up companies for their clients in places from Belize to the Seychelles where the tax rates are low or zero and where ownership can legally be kept secret. Such companies typically have no offices or even staff, just a board of directors that is often drawn from the offshore advisor’s own employees. Some of these paper companies are owned by other paper companies to make them even harder to track.

"These ultrawealthy people and their procurers have found a way to operate by a different set of laws from you and me," Cory Doctorow, science-fiction author and political activist, wrote on Twitter. "There's a public system, the one you and I send an appreciable chunk of our annual income to, as part of the cost of living in a civilized world where there is fiscal space for public spending on roads, schools, hospitals, public health, firefighting and other necessities."

"Then there's the other system, a system that operates in the shadows, a system you need millions and millions to participate in, a system that lets you pay little tax, no tax, or even NEGATIVE tax - when states and countries hand working people's money over to the 0.1%," he added. "Each of these arrangements represents a risible fiction: a shell company is a business, a business is a person, that person resides in a file-drawer in the desk of a bank official on some distant treasure island.″

The most significant firm named in the Pandora Papers is Alcogal (Alemán, Cordero, Galindo & Lee), a law firm in Panama, that was founded in 1985 by Jaime Alemán, a former Panamanian ambassador to the U.S. His firm has helped hundreds of wealthy people around the world create offshore companies to avoid paying tax, notably in Latin America. All told the documents list 3,926 offshore entities created by Alcogal, including 312 in the British Virgin Islands alone for Morgan Stanley bank.

Alemán, is the author of an auto-biography titled “Honesty is Priceless.” In that book, he explained his methods: “The client simply went to Switzerland (or Luxemburg, Andorra, Hong Kong, etc.), opened a numbered bank account for which the beneficiary was a Panamanian corporation, which in turn operated totally secretly, and had no obligation to pay taxes in either Switzerland or Panama,” he wrote. “The authorities in the client’s country had no idea these funds existed, therefore they could not collect taxes on it.”

One major Alcogal client is Andrej Babiš, the Czech prime minister, who is currently up for re-election. According to ICIJ, Babiš acquired a €20 million castle in the south of France by routing money through a series of offshore companies, created by Alcogal.

"I have never done anything illegal or wrong, but that does not prevent them from trying to denigrate me again and influence the Czech parliamentary elections," Babiš tweeted in response to the revelations.

Another Alcogal client is Uhuru Kenyatta, the current president of Kenya. Kenyatta and his family, according to ICIJ, hid $30 million in wealth acquired from land deals and other businesses via offshore companies in British Virgin Islands & Panama, with the help of both Alcogal as well as Union Bancaire Privée in Geneva, Switzerland.

Other major revelations in the Pandora Papers include stories on UK Conservative party donor Mohamed Amersi, who funded Boris Johnson’s leadership campaign. Amersi advised Telia telecoms on a deal that turned out to be a £162 million bribe for the daughter of Uzbekistan’s president. Telia paid him $65 million, according to the BBC.

Amersi’s lawyers deny this. “Any allegation that our client operated as a conduit to help Telia acquire regulatory benefits and secure telecoms deals... is categorically false," they stated in a response to the BBC.

Yet another major UK Conservative party donor named in the Pandora Papers is oil tycoon Viktor Fedotov who secretly co-owned a company named Vniist that is accused of siphoning funds from the Russian state pipeline monopoly Transneft via tax havens. Fedotov apparently bought a $34 million private jet with his profits, according to the Guardian newspaper. In response to the Guardian story, Fedotov’s lawyers told the newspaper that he has operated in an open and transparent manner throughout the course of his career.”

One of the biggest clients of these 14 offshore firms is Baker McKenzie, a U.S. law firm with 4,700 lawyers in 46 countries and annual revenue of $3.1 billion. The Pandora Papers show that Baker McKenzie helped set up 440 offshore companies in tax havens, with the help of advisors like Alcogal.

The Pandora Papers also show that Baker McKenzie set up shell companies in Cyprus for RJR Nabisco, the snack food and tobacco giant; a Dutch tax shelter for Nike; and it helped Facebook move its tax headquarters to Ireland.

The law firm denies it has done anything wrong. “We strive to ensure that our clients adhere to both the law and best practice,” spokesman John McGuinness told ICIJ. “On occasion, we find that clients later engage in activities that are not consistent with our initial due diligence, or new facts or developments come to light which would cause us to terminate our representation of them.”

Although the 14 secrecy and tax advisers are located in infamous tax havens, the companies that they create are often located in less well known locations like the U.S. state of South Dakota, which has recently become a major destination for tax dodgers with $367 billion in hidden assets.

By no means are the services of these 14 offshore firms restricted to politicians and billionaires. The Legion of Christ, a disgraced Roman Catholic order of priests, placed millions of dollars in a secret New Zealand trust according to ICIJ, to buy properties in Illinois, Indiana, Iowa, Florida and Texas via a company called Pensam Capital, that would later become infamous for evicting struggling U.S. tenants during the coronavirus pandemic.

While the Pandora Papers have made headlines, they may not force these firms or the clients to stop, since most of the deals are legal. “The legality is the true scandal,″ writes Doctorow.

Efforts have certainly been made to pass laws to stop such practices but with little effect, say experts. “Professional services firms seem to see every piece of legislation as just another obstacle to get around,” Alex Cobham, the chief executive of the Tax Justice Network, told Fortune magazine. “The response does not seem to be, ‘Oh, I need to be clean. No, it’s been, ‘I need to find different ways to keep cheating.’”