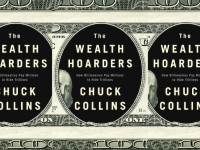 Chuck Collins, author of "The Wealth Hoarders: How Billionaires Pay Millions to Hide Trillions," speaks by video with Pratap Chatterjee of CorpWatch about the Pandora Papers, and how a group of offshore consultancy firms design shell companies and trusts to help the very rich to avoid paying taxes.

"We're looking at trillions of dollars that leaders are able to funnel and siphon money away and hide it in these jurisdictions through the use of anonymous companies," Collins, the director of the Program on Inequality at the Institute for Policy Studies in Washington DC, told CorpWatch. "There are some real harms to this system - [it] is a way that the wealth of our communities is being siphoned away."

His book tells the story of this industry - sometimes called 'wealth defense' - that consists of people who work exclusively for 'ultra-high net worth' individuals - that is to say those who have $30 million or more. This group of financial advisors are also the main focus of the Pandora Papers that were recently released by the International Consortium of Investigative Journalists (ICIJ). They consist of a trove of million of leaked documents that reveal offshore assets of over 30 world leaders, 130 billionaires and 330 politicians.

A major task of these advisors is to design schemes are intended to protect heirs of the wealthy from having to pay tax on their money. While U.S. taxpayers are allowed to give their children and other heirs up to $11.7 million each, anything over that can be taxed.

Big multinational companies use very similar methods to avoid paying taxes, Collins told CorpWatch. "In 2020, 55 very profitable U.S. companies paid no federal income tax at all and those included Nike, Fedex, Archer Daniels Midland, Salesforce, Dish network," he said. "These companies earn hundreds of millions of dollars in profits [but] paid no taxes in part because they're using some of the same gimmicks and probably some new some other ones specific to transnational companies."

They are based in places like Belize, British Virgin Islands, Cyprus, Hong Kong, Panama, Seychelles, Switzerland and the United Arab Emirates - but they often hide the money right inside the U.S. such as states like South Dakota which has no state income tax, capital gains tax or inheritance tax.

There they hire what is called a 'family office' to set up a variety of schemes such as a "Granter Retained Annuity Trusts" (GRATs) that allows them to avoid tax entirely.

Collins estimates that something like $2 trillion to $3 trillion is probably is hidden in South Dakota, even though it has a population of just one million people. That is to say between $2 million and $3 million per person, which is roughly 100 times more than the average income of people in the state which stood at $30,773 in 2019.

Historical examples of families that used wealth defenders to ensure that their heirs pay no taxes include the Pritzkers of Illinois, who started the Hyatt hotels; the Carlsons of Minnesota, who started the Radisson Hotels; and the Wrigley family of Pennsylvania, whose family company made Wrigley chewing gum. And more recently Phil Knight, the founder of Nike in Oregon, the sportswear company.

U.S. senator Bernie Sanders has estimated that an annual tax on such families - the top 0.1 percent of U.S. households - could raise an average of $435 billion a year for critical public needs over the next decade. Right now, however, taxes on inheritance raise less than 5 percent of that amount.

"The estate tax raises about $20 billion dollars of revenue a year which is what you know Elon Musk [CEO of Tesla] made in half a day last week," Collins says."It's important to communicate with lawmakers that it's unacceptable that the wealthiest people in the world are paying low taxes or no taxes."

To learn more, watch the video on YouTube here.

And to learn more about the Program on Inequality of the Institute for Policy Studies in Washington, DC, go here.