Outsourcing Intelligence in Iraq: A CorpWatch Report on L-3/Titan, Updated December 2008 with Recommendations from Amnesty International 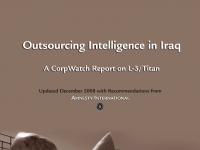 When U.S. troops or embassy officials want to track and investigate Iraqis - such as interrogating prisoners accused of terrorism, doing background checks on potential employees, or even to chat with ordinary citizens on the street - the principal intermediary is a relatively obscure company named L-3, that is just over a decade old. Although it is not as well known as companies like Halliburton, it is now the ninth-largest military contractor in the United States. Based in Manhattan, it is headquartered on the upper floors of a skyscraper on Third Avenue, a few blocks from the United Nations. The bulk of this work is done by a recently acquired L-3 subsidiary: Titan Corporation of San Diego.

The company's principal role is to recruit, vet, hire, place and pay these personnel. The U.S. military oversees and directs the day-to-day work, but L-3 and Titan play a key role in staffing and maintaining what was once considered an inherently governmental function: the acquisition and analysis of human intelligence during war. All told, L-3 and Titan are now being paid approximately one billion dollars a year for this work, with a cumulative total approaching $3 billion since the 2003 invasion of Iraq.

L-3/Titan is now probably the second largest employer in Iraq (after Kellogg, Brown & Root, a former Halliburton subsidiary) with almost 7,000 translators and more than 300 intelligence specialists. Unfortunately, a number of the personnel hired by L-3 and Titan have been barely competent and several have been indicted for criminal acts.

The company also has the highest rate of casualties of any civilian contractor in the country (at least 280 so far), with Titan employees dying at a rate that is far greater than that of the U.S. military itself. This is mostly because Titan's Iraqi employees face threats of assassination for working with the military. That is not the only hazard for Titan personnel; both Iraqi and U.S. hires have also complained that Titan has failed to provide employees with proper medical support when injured in the course of duty.

In recent months, L-3/Titan's work has been criticized harshly by the military for poor performance and it has lost its biggest contract - but company executives recently cut a deal with the winning bidder and the military to keep part of the work. The failures in Iraq are the most public face of this contract; reports suggest that the company also provides intelligence services such as translation to more secretive agencies like the Counter intelligence Field Activity (CFA) and the Naval Criminal Investigative Service (NCIS), which have also been affected.

In writing this report, CorpWatch has been fortunate to draw directly from the experiences of numerous military and civilian interrogators and translators who have come forward as anonymous whistle-blowers. The U.S. military has responded to some information requests on the financial details of the contract, but L-3 officials have failed to return repeated email and phone requests to discuss their work over the last two years. The military has refused to discuss the actual implementation of the contract. "We're not going to talk about intelligence contracts," Lieutenant Colonel Barry Johnson, spokesman for the Multi-National Force Command in Baghdad, told CorpWatch.

Our research indicates that there are significant problems with these contracts, notably with the hiring and vetting practices of both interrogators and translators, many of who are unqualified or poorly qualified for the work. This failure has the potential to seriously compromise national security - as several examples cited in this report indicate.

The reasons that information on the performance of the contractor is hard to come by are two-fold: government rules on business confidentiality intended to protect a company's competitive edge, coupled with the blind belief that secrecy is the hand-maiden of intelligence.

We believe that excessive secrecy on contractor performance is neither necessary nor good practice as it leads to a lack of accountability and thus potentially to bad intelligence. We recommend that the U.S. Congress investigate what oversight actually exists for the work of L-3/Titan (and its sub-contractors) and how effective this oversight is, precisely because these companies have acquired inherently governmental functions. Finally we urge the government to strengthen contracting rules and crack down on human rights abuses, and for the company to compensate the workers and their families for injury and death.

Download "Outsourcing Intelligence in Iraq: A CorpWatch Report on L-3/Titan"