KBR and Halliburton Can Be Sued For Iraq Toxic Burn Pits, Court Rules 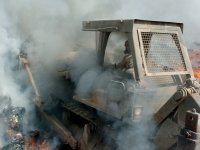 KBR and Halliburton - two major U.S. military contractors - can be sued for the health impacts of trash incineration on U.S. soldiers who served in the war in Iraq, according to a new court decision that allows a series of 57 lawsuits against the companies to go forward.

The two companies have been paid some $40 billion for services provided to troops serving in the U.S. War on Terror throughout Central Asia and the Middle East in countries ranging from Afghanistan and Iraq to Kuwait and Uzbekistan. (Most of the contracts were implemented by KBR which was a subsidiary of Halliburton until 2007 when it was spun off into a separate company)

Under the Logistics Civilian Augmentation Program (LOGCAP) contract, KBR and Halliburton operated ten acre wide burn pits 24 hours a day on U.S. military bases throughout Iraq until the 2010 National Defense Authorization Act officially banned them. They were used to incinerate "plastics, batteries, appliances, medicine, dead animals, and even human body parts." Government contractors, troops and Iraqi civilians allege that they were exposed to toxic carcinogens and chemicals by breathing the pit's fumes and dust.

Last February Judge Roger Titus in Maryland threw out the lawsuits, after he agreed with the two companies that their work should be immune from prosecution since they were working for the U.S. government.

But in March, a panel of three judges in Richmond, Virginia, over-ruled Titus. KBR was entitled to immunity "only if it adhered to the terms of the contract with the government," Judge Henry F. Floyd wrote. "Accordingly, we hold that the district court erred in finding that KBR was entitled to derivative sovereign immunity at this time and vacate the court's decision."

The court order is a breakthrough for the plaintiffs who have claimed in a consolidated lawsuit that KBR "violated military directives in its performance of waste disposal and water treatment services."

"We're confident that further discovery will show that KBR acted outside the control of the military, " Susan Burke, the lead lawyer for the soldiers, told Bloomberg in a telephone interview.

A representative for KBR, however, expressed "disappointment" in the ruling.

The rise in health-related concerns - asthma, chronic bronchitis and Lou Gehrig's disease - among returning soldiers led Tom Bishop and Carol Shea-Porter, two Democratic members of Congress, to successfully lobby their fellow legislators to agree to a ban on the waste-burning practice in 2010.

About the same time, the U.S. Department of Defense authorized the Institute of Medicine, a non-profit arm of the National Academy of Sciences, to research links between the operation of open air-pits and health damages in 2010.

One of the follow-up reports found no definite link between the overall chemical exposure and long-lasting health problems but did find that five or more of the chemicals that were emitted at one of the bases studied caused "cancer, liver toxicity, respiratory toxicity and morbidity, neurological effects, blood effects...cardiovascular toxicity and morbidity, and reproductive toxicity."

Another study by Mozhgan Savabieasfahani, an environmental toxologist at the University of Michigan found a 15 time higher rate of birth defects, health abnormalities and multiple cancers among newborns in Basra and Fallujah than before the start of the war.

"Iraq is poisoned. Thirty-five million Iraqis wake up every morning to a living nightmare of childhood cancers, adult cancers and birth defects. Familial cancers, cluster cancers and multiple cancers in the same individual have become frequent in Iraq," wrote Savabieasfahani in a paper co-authored by Al-Sabbak, Sadik Ali, O.Savabi, G. Savabi and Dastgiri in Bulletin of Environmental Contamination and Toxicology. "We suspect that the population is chronically exposed to an environmental agent. "

Meanwhile, KBR and Halliburton continue to battle multiple other lawsuits stemming from their LOGCAP contracts. Several military veterans have sued KBR for health-related problems resulting from exposure to a carcinogen, hexavalent chromium, at a water treatment facility in Iraq. Another lawsuit, brought by a soldier's mother, alleges KBR responsible for the death of her son who was electrocuted while taking a shower at an Army base.