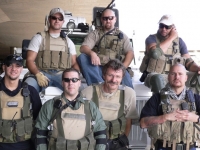 A federal jury has found three former Blackwater contractors guilty of manslaughter and a fourth guilty of murder for killing 17 Iraqis in Baghdad's Nissour Square on September 16, 2007. The men were private security guards hired to provide security to U.S. government employees at the time.

Lawyers for Blackwater, a private security company from North Carolina, argued that the four men who were driving through Baghdad in an armed convoy on the day, believed that they had come under attack and were simply returning fire to protect themelves.

Dozens of relatives and witnesses were brought over from Baghdad to testify at the trial. Former Blackwater employees also testified against the four men, stating that they talked of turning "a guy's head into a canoe" and "popping his grape." Slatten was accused of "deliberately fired his weapon to draw out return fire and instigate gun battles" as "payback for 9/11."

The men were prosecuted under the Military Extraterritorial Jurisdiction Act (MEJA), a law that allows the U.S. courts to hear cases against contractors to the U.S. Department of Defense for crimes committed overseas.

"The verdict is a resounding affirmation of the commitment of the American people to the rule of law, even in times of war," said Ronald Machen, the prosecuting attorney said in a prepared statement. "Seven years ago, these Blackwater contractors unleashed powerful sniper fire, machine guns and grenade launchers on innocent men, women and children. Today, they were held accountable for that outrageous attack and its devastating consequences for so many Iraqi families."

The Iraqi families were more skeptical. "I'm not convinced that the verdicts aren't some kind of play to tell the world that the United States respects human beings and they're valuable, while in fact it's the opposite, that humans aren't valuable to them," Ali Abbas Mahmoud, an Iraqi ministry of housing employee whose brother was killed and sister injured in the Nisour Square massacre, told McClatchy. "If they are valuable, why do they hire these killers? In my opinion, it's just a kind of media show."

MEJA has also been used against Justin Cannon and Christopher Drotleff who worked for Paravant, a subsidiary of Blackwater for the killing of Romal Mohammad Naiem and Rahib Mirza Mohammad on May 4, 2009. In 2012, the two men were sentenced to 30 months and 37 months in prison respectively.

While most legal experts applauded the verdict, several noted that it did not address bigger issues.

"[H]olding individuals responsible is not enough," Baher Azmy, the legal director of the Center for Constitutional Rights (CCR), said in a statement. "Private military contractors ... have engaged in a variety of war crimes and atrocities during the [2003 Iraq] invasion and occupation while reaping billions of dollars in profits from the war. To this day, the US government continues to award Blackwater and its successor entities millions of dollars each year in contracts, essentially rewarding war crime."

Others also pointed out that the law used to prosecute the men only applied to contractors working for the Pentagon, and not to those working for other agencies. "While MEJA has been extremely important in holding certain contractors accountable, there are significant gaps in the law that allow other contractors to go unpunished for heinous acts," said Amol Mehra, executive director of the International Corporate Accountability Roundtable (ICAR). "The time is now ripe to address these gaps and build meaningful accountability over these actors."

Senator Patrick Leahy of Vermont has been pushing for a new law to fill that gap - the Civilian Extraterritorial Jurisdiction Act - but to date it has not gathered enough support from other lawmakers.

Meanwhile, the number of private security guards employed by the U.S. government in the War on Terror has dwindled considerably. The U.S. military estimates that there a little over 3,000 working in Afghanistan now, down from over 10,000 a couple of years ago and a similar or greater number in Iraq. Almost two our of three working in Afghanistan now are local employees and thus subject to local laws.