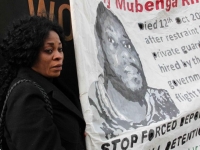 The family of Jimmy Mubenga, an Angolan refugee in the UK, has brought a civil lawsuit against G4S, the world's largest private security company. Mubenga died on October 12, 2010 while being restrained by G4S guards who were hired to help deport him from the country.

Mubenga lived in the UK for 16 years but was convicted for involvement in a pub fight. He was then deported by the UK Border Authority (UKBA) under laws that allow non-citizens to be kicked out of the country if they are sentenced to prison.

When Mubenga was taken on British Airways flight number 77 from London to Angola, he was treated "worse than an animal" said Mubenga's wife, Adrienne Makenda Kambana. Kevin Wallis, an oil engineer, who was seated in the opposite row, said he saw the security guards "holding him down" and "moaning and groaning."

Deportees are often taken out of the UK by security contractors on commercial flights who are required to carry them under the 1971 Immigration Act. Others are taken on specially chartered flights.  However if the deportees put up a fight, pilots often ask the contractors to deplane.

In order to avoid being kicked off, security guards have developed a technique called "carpet karaoke" which involves pushing "a seated and belted deportee forward so that he or she would "sing to the carpet" and their shouts, screams and cries would be muffled, according to a 2011 report titled "Out of Control" by Amnesty UK.

Before the flight took off, Mubenga went quiet. An ambulance was called and he was pronounced dead.

Terry Hughes, Colin Kaler and Stuart Tribelnig, the three security guards employed by G4S, were found guilty of "unlawful killing" by a jury vote of nine to one on Tuesday.

"The fact that Mr Mubenga was pushed or held down, or a combination of the two, was a significant, that is more than minimal, cause of death," declared the foreman of the jury. "The guards, we believe, would have known that they would have caused Mr Mubenga harm in their actions, if not serious harm. We find that they were using unreasonable force and acting in an unlawful manner."

"At the inquest the reality of the murky private removals industry emerged, where deportations are a business for profit with multimillion-pound contracts," writes Mark Scott, a lawyer with Bhatt Murphy solicitors who represents Mubenga's family, told reporters outside the court after the ruling "G4S was paid by the hour, and if a deportation failed profits were hit. The guards' wages were dependent on the hours worked. It was important to "get the job away" and they were given incentives for successful removals."

G4S does not have a good record in handling other refugees and asylum seekers: a total of 773 complaints were lodged against the company when it had the UKBA contract. Also in a 2011 report, the Chief Inspector of Prisons found conditions in a G4S run immigration center to be "objectionable, distressing" and "inhumane."

G4S has since lost the contract with UKBA. The new deportation contractor is Tascor, a subsidiary of Capita, which has hired away many of the security guards and supervisors from G4S, according to Scott.

Tascor employees recently told the Guardian newspaper that "there is still inadequate training for new recruits." Deportees on a recent charter flight from the UK to Nigeria were "punched and assaulted by guards" according to an anonymous whistleblower.

"The verdict in Mubenga's inquest has shattered the illusion that those in uniform should be trusted to know what they are doing," writes Nadine El-Enany, a lecturer in law at Birkbeck College. "It has also demonstrated that there is no basis for the assumption that deportation is a legitimate and peaceful state activity."