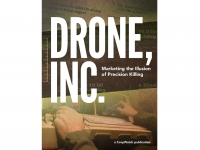 Political leaders insist that the drone war’s combination of multiple layers of hardware and software has allowed the military to win wars without putting boots on the ground. Soldiers, for their part, place a high degree of trust that these technologies will find the right targets from halfway across the world. However, well-hidden engineering errors embedded in this vast and complex intelligence enterprise have given both politicians and the military a false confidence.

A few brave whistleblowers in the Air Force, notably low-ranked imagery analysts and sensor operators who watch targets day in and day out, have stepped forward to say that the tools simply don’t work. Their testimony complements and corroborates the numerous reports from local media on the ground in targeted communities as well as investigations by respected international human rights groups.

Meanwhile contractors are profiting from the lack of proper oversight and controls on selling hardware and software that has never been properly  tested.

We believe that the time is ripe for military commanders and members of the U.S. Congress to seize the initiative to review the last decade of targeted killing and demand a rigorous system of checks and balances.

There are multiple existing mechanisms that can be used to review these flawed drone technologies and contractors: The Government Accountability Office, the Congressional Research Service, and the armed services and intelligence committees in Congress can each do its part. Less well-known but equally important entities like the Defense Contract Audit Agency and the inspectors general of each agency have the ability to raise critical questions.

And there are other, perhaps less obvious, ways to tackle these problems. For example, every day military lawyers, judge advocate generals, on the “kill floor” have an opportunity to question the data that strike commanders present to them. They can examine the quality of the video and phone location data as well as question the algorithms by which targets are tracked. Commanders can support whistleblowers by taking their complaints seriously and protecting them against retaliation. Even at the battalion level, commanders have the ability to request independent reviews whenever there is an allegation of error or misconduct such as the killing of innocent people.

In reality, the most effective check on the drone war to date has been the Pentagon’s Operational Test & Evaluation Directorate. This unlikely and obscure office has acted as brake on Big Safari and PEO IEW&S, where contractors have had a field day selling poor and sometimes downright faulty technology.