Drone, Inc. - HARDWARE: Watching from Above 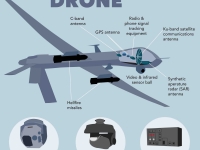 A military drone’s surveillance sensor system is a sophisticated stand-in for a pilot’s keen senses. Drone “eyes” include a suite of cameras that can transmit video and heat signatures, plus radar antennas that can map the precise dimensions of large objects and ground terrain. The “ears” include receivers to detect and collect radio frequency signals from mobile phones and tactical radios within range. Finally the “head,” located on top of the drone, carries a GPS device and an “inertial navigation system” to calculate the drone’s location and a directional satellite antenna to track and transmit its catch to relay satellites that route the data around the world for  analysis  and targeting.

Most of these sensors are housed under the nose of the aircraft in a ball that holds two video cameras (one with a zoom lens), an infrared camera, and a laser system to pinpoint (aka “paint” or “sparkle”) targets. In addition, drones can carry a separate 3-D imaging system and a radar system.

Drones are organized into “combat air patrols” of three to four aircraft, each with a pilot and sensor operator. But a full crew can consist of as many as 180 individuals, including radio technicians, safety observers, video analysts, still imagery analysts, and strike coordinators and commanders. In addition, support crews launch, recover, maintain, and refuel the drones at local airfields close to the action.20

The U.S. currently fields about 60 such patrols around the world at any given time. Despite White House pressure to increase the number to 90, a severe shortage of trained pilots has impeded a quick expansion.21