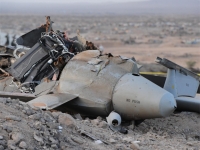 Most modern military systems, including drone aircraft, take many years to develop. The Pentagon buys such new technologies via a system of incremental testing known as the “evolutionary acquisition program.”307 First it publishes a wish list of the “increments” or components it would like the new system to include, and then it invites companies to compete for the contract to build trial versions of each item for testing.

When any stand-alone element passes the required tests and is considered “operationally effective, suitable, and survivable” the military puts in a big order. That’s not the end of the process though since the wish list typically grows. The contractors go away and design new capabilities, which the Pentagon then subjects to yet more tests. Over time, sometimes even decades, the Pentagon allows the “acquisition” of a full system to “evolve,” resulting in quicker delivery and allowing for mid-course corrections of errors in specific components.

The job of DOT&E is to conduct independent testing of these experimental military systems at every stage of this evolutionary cycle. Not only does the agency have the power to field test each component of a new system, it can force contractors to go back to the drawing board and fix major flaws before placing a big order.

The first set of DOT&E tests for a new system is called the Initial Operational Test & Evaluation (IOT&E); the second is the Follow-on Operational Test & Evaluation (FOT&E). Technologies are typically ranked on “key performance parameters.”308 Quite often a system that has been judged operationally effective, suitable, and survivable for military purchase may still have minor or even fairly serious flaws or shortcomings that DOT&E has recommend be fixed. The final IOT&E and FOT&E reports can thus be a gold mine of details of possible problems for commanders, policy makers and journalists.

After DOT&E tests each part of the system, the Pentagon continues to request updates via a confusing system of “blocks.” Thus, the first version of the Reaper drone was Block 1 and the second was Block 5.309 But the first Global Hawk drone was Block 10, followed by Block 20, Block 30, and so on.310 The F-35 fighter started out with Block 1A, followed by Block 1B, then Block 2A, Block 2B, Block 3i and Block 3F.311

Components of the drone system put through this DOT&E evaluation system include the sensors, the database systems, and the aircraft themselves. But as we have shown in the case of Big Safari’s request that many drone technologies be approved via the Quick Reaction Capabilities cycle, the Pentagon’s normal methodical approach has often been circumvented.

Given the opportunity, DOT&E has produced many critical reports on the drone system. Here is a list of a few such audits:

Predator: The Predator, manufactured by General Atomics, was not initially designed to fire weapons or track signals, but rather to broadcast near real-time video. It can stay aloft for 24 hours and fly 770 miles without refueling. More than seven years after its first flight in 1994, Big Safari chose the Predator to be modified for surveillance and war fighting after the September 11 attacks. Both the MTS-A sensor ball and the Hellfire missile, designed for helicopters, were adapted for the Predator in the experiments described in the introduction.

DOT&E was not impressed with the first results of the jury-rigged drone. In October 2001, the agency concluded that the Predator was “not operationally effective or suitable.”313 “[P]oor target location accuracy, ineffective communications and limits imposed by relatively benign weather, including rain” were just some of the problems afflicting the Predator.

Data from a series of DOT&E tests in Nevada showed that when the Predator was flying at 30,000 feet, the infrared cameras were able to detect only 21 percent of wheeled vehicles and identify the vehicles correctly just five percent of the time.314

Reaper: The Reaper drone, also manufactured by General Atomics, first flew in May 2001. It has a range of 1,150 miles and can spend 30 hours in the  air. In 2009 DOT&E rated the Reaper as effective in the “killer” role, but said it was not able to verify the effectiveness of the “hunter” role, notably because the synthetic aperture radar system was not working.315

Global Hawk: The Global Hawk program was first launched in 1998. Manufacturer Northrop Grumman boasts that the plane can survey “vast geographic regions with pinpoint accuracy … in all types of weather—day or night.” It is designed to fly almost 14,000 miles without refueling and stay aloft for 34 hours.316

However, the drone has spent much of the last two decades on the ground since it is not able to fly through storms or icy weather. A May 2011 DOT&E report concluded that the Global Hawk was only functional about 40 percent of the time and did not recommend using it during a crisis or war.317

The report noted that the drone suffers from “frequent failures of mission-critical air vehicle components reduce takeoff reliability and increase mission abort rates.” An Air Force officer, interviewed by Andrew Cockburn, explained this problem in more descriptive terms: “Junk is right. It’s made of composite plastic with adhesives instead of nuts and bolts to keep the weight down but that glue doesn’t work so well so internal parts, fuel lines and electrical conduits, come apart in flight.”

Cockburn’s source also says that the Global Hawk sensors are terrible. “The infrared can pick out campfires but that’s about it, and that’s only when it’s directly over the target, and you need the target’s cooperation for that. The radar suffers from the plastic airframe twisting and flexing at high altitude so the picture shifts with it.”

The DOT&E report also calculated that the Global Hawk was only able to find the “signal source geographic locations” in seven out of 10,719 signals, i.e., less than one-half of one percent of detected signals.

Gorgon Stare: A nine-camera array designed to be carried by drone to conduct “wide-area persistent surveillance,” Gorgon Stare was built by Sierra Nevada with funding from Big Safari. On its launch in January 2011, it was championed by Maj. Gen. James Poss, Air Force assistant deputy chief of staff for intelligence, surveillance and reconnaissance. “Gorgon Stare will be looking at a whole city, so there will be no way for the adversary to know what we’re looking at, and we can see everything,” he told the Washington Post.320

Just three weeks later, a leaked DOT&E report revealed that the Gorgon Stare cameras were “marginally sufficient to track vehicles [but] not sufficient to track [people]. “In general, [infrared] imagery quality is poor, which yields marginal mission capability at night.” Large area pictures are “subject to gaps between stitching areas, which manifests itself as a large black triangle moving throughout the image.” Three months later, in April 2011, Poss admitted that poor quality Predator drone video imagery had led soldiers to kill 23 unarmed villagers in Uruzgan.321

Congressional Research Service (CRS): This research agency provides nonpartisan, objective policy and legal analysis to the  U.S.  Congress.  CRS  has  issued  overview reports on the use of drones by the Pentagon as well as the potential for domestic drone use.322

Defense Contract Audit Agency (DCAA): The Pentagon’s audit agency conducts 76 percent of all civilian agency audits and 89 percent of all federal contracting audits. The agency maintains offices on the premises of Lockheed Martin, Raytheon, and Northrop Grumman and has the authority to examine secret contracts via its Field Detachment division.323

Government Accountability Office (GAO): The audit arm of the U.S. Congress the GAO has broad powers to investigate how the federal government spends money. It has issued critical reports on drone pilot training and on DCGS.324

Inspectors General (OIGs): Most federal agencies have an independent office charged with investigating criminal activity as well as waste, fraud, and abuse within their parent agency. The Department of Homeland Security Office of Inspector General issued an excellent report on the failure of drones on the U.S.-Mexico border, while the Pentagon’s Inspector General has critically reviewed the Gray Eagle, Hunter, and Reaper drone programs.325