Drone, Inc. - The Dawn of the Networked Drone 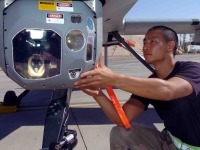 Drone technology is neither new nor uncommon any longer. Hobbyists now buy millions of camera-equipped quadracopters annually to film themselves from the air; commercial entities use drones are being used for all manner of activities from crop inspections to film-making.

Military drones—notably the Predator and Reaper—that are used for targeted killing, however, bear little resemblance to these consumer models. They are primarily surveillance platforms bristling with sensors that have become key nodes in the complex global networked system of intelligence gathering for the War on Terror.

Three experiments in 2001 illustrate the evolution of these networked military drones. The first experiment was an attempt to use a drone video camera to track down a target and then fire a missile at it. The second was an attempt to pinpoint the ground-based source of a radio signal and point a drone video camera at it. And the third experiment was to share all these video, radio and location data among observers in multiple locations in “real time,” i.e., as it was happening.

These incremental experiments took on a profound importance because of what happened next: The Sept. 11, 2001 attacks in New York and Washington DC galvanized the Pentagon to speed up development of these  drone technologies to help the military wage war in places where it was either politically or logistically difficult to deploy troops.

All three experiments had taken place in California, in many ways the birthplace of the military drone. General Atomics, the company that makes the Predator, the Reaper as well as Hellfire missiles, is based in San Diego. Some of the   key military bases and testing ranges such as China Lake, El Mirage Airfield, Edwards Air Force Base and Camp Pendleton are also located in central and southern California.

The first experiment—using a drone to locate and fire on a remote target—was part of a scheme dreamed up by a secretive Air Force technology development program known informally as Big Safari. It took place on April 4, 2001, when William Casey of Raytheon joined Chris Dusseault of General Atomics at El Mirage Airfield. There, Raytheon’s Multi Spectral Targeting System (MTS)—a makeshift test “ball” of electronic sensors—was attached to the bottom of a General Atomics Predator drone.9

Inside the 124-pound, 19-inch-tall grey metal ball was a video camera, an infrared camera, and a laser pointer (called a designator) that could help guide a missile. But the data that streamed back from the drone was not promising, according to Richard Whittle, author of the book Predator, who interviewed many of those present. “Tracker sucks!” one crew member complained. “Focus sucks!” said another, and a third added: “Color sucks!” Worst of all, the video camera and laser were misaligned, making it hard to confirm that the missile hit the intended target.

The second experiment tried to address the problem of finding targets. The MTS-A camera provided what drone operators call a “soda straw,” or a view that is essentially restricted to a very narrow pipe, making it hard to follow multiple targets or scan the horizon. The video quality was also too poor to identify people on screen. If, however, other intelligence could be used to automatically point the camera at the desired target, then drones could be used to hunt, not just to fire missiles.

The Dragonfly—a radio tracking sensor manufactured by Ticom Geomatics, a start-up in Austin, Texas —was programmed to serve as part of a networked sensor system that could locate radios on the ground, allowing drone operators to target a specific radio device rather than having to find and identify targets using the video feed. The system would eventually become automated, directing camera operators towards targets with no human intervention. It was tested in June 2001 on aircraft at Camp Pendleton.10

In the third experiment, also in June 2001, Army soldiers at the China Lake Base attempted to share data with a Navy control station on the U.S.S. Coronado, an experimental command ship off the California coast, near Camp Pendleton. The relatively new computer network that routed the data, the Distributed Common Ground System (DCGS), was maintained by Northrop Grumman of Virginia and Lockheed Martin of Maryland, among other contractors.11

“The Army and Navy demonstrated significant interoperable network centric capabilities,” Maj. Jim Chapman told the Eagle, the Army Space and Missile Defense Command’s magazine. “The experiment was [an] unqualified success.” But, as we will see, he was much too optimistic.

Barely three months after the summer experiments, four planes crashed into targets on September 11, 2001, and soon after, the U.S. went to war in Afghanistan. Gen. John Jumper, commander of the Air Combat Command, ordered a ramp-up of the Big Safari drone program.12 Before the contract was canceled in 2010, the Pentagon bought 268 Predator drones from General Atomics in San Diego. In 2007, when General Atomics released the more advanced Reaper drones, the Pentagon ordered 329 of the newer aircraft.13

This report will focus on sensors carried by the Predator and the Reaper, which are the principal aircraft used for targeted killing. We will, however, occasionally reference other drones such as the Global Hawk, as well as the piloted planes that complement and extend the targeted killing system. (see box above).