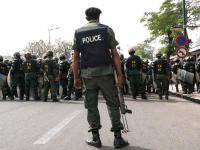 At least four people were killed when Cambodian police opened fire on a garment workers protest in Canadia Industrial Park in Phnom Penh. The workers were demanding a minimum wage of $154 a month from employers who supply Calvin Klein and Tommy Hilfiger brands as well as H&M.

The garment industry is Cambodia's biggest export industry generating over $5 billion in international sales for the country in 2013 and employing some 500,000 people work in over 400 garment and shoe factories. Many of the workers were paid just $61 a month until last March when minimum wages were raised to $80.

Unions have demanded that the wages be raised further and have organized a series of strikes to press the government. Over 130 strikes were reported in 2013, up from 121 in 2012 and almost four times greater than 2010 and 2011, according to the Garment Manufacturers Association of Cambodia. Government officials have so far refused to bow to their demands, with a Ministry of Labor Advisory Committee offering workers a small raise to $95 a month as a compromise.

Over the New Year, tens of thousands of workers around the country went on strike to demand higher wages, prompting the government to send in the security forces. On Thursday, over a dozen people outside the Yakjin factory were beaten by a paratrooper unit armed with batons, steel pipes and even slingshots, sparking outrage, according to the Cambodia Daily.

"The workers didn't want violence. We just wanted to block the road . . . the police attacked us and shot us," Yean Sothear, one of the protestors who was injured, told the Phnom Penh Post. "My friend went to the nearby hospital, but the police ordered them not to treat them - that's why they were angry."

"Why are they cracking down on us when we are just demanding our salary?" Rong Chhun, president of the Cambodian Confederation of Unions, asked the newspaper.

"We condemn this appalling use of extreme lethal force by security forces," Naly Pilorge, director of the Cambodian League for the Promotion and Defense of Human Rights (LICADHO), said in a statement. "Security forces must now put an immediate end to the use of live ammunition against civilians and ensure that all those injured are safely transported to hospital without delay."

The protests and the accompanying violence have battered Cambodia's reputation as a model of fair production. For over a decade the country has been able to point to the International Labor Organization's Better Factories Cambodia (BFC) monitoring program allowing it to compare itself favorably with Bangladesh where workers make just $38 a month.

While industry blames the unions for fomenting trouble, independent experts have backed the unions.

"Cambodia's longstanding reputation as a "success story" in efforts to end sweatshop abuses in export garment production is wearing thin," wrote researchers from Stanford Law School and the Worker Rights Consortium in a report titled "Monitoring in the Dark" published in February 2013.

The report noted that working conditions were only reported to factory managers and the brands that source from the factory which led to "a glaring lack of transparency and an institutional overemphasis on protecting the interests of factory owners and international buyers, rather than responding to appeals from garment workers to protect them from abuse."