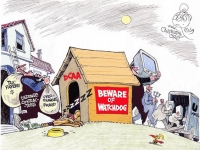 Military auditors failed to complete an audit of the business systems of an Ohio-based contractor even though it had billed for $1 billion worth of work over the last four years, largely done in Afghanistan. Immediately after this fact came to light at a public hearing of the bi-partisan Commission on Wartime Contracting, the Defense Contract Audit Agency (DCAA) scrambled to dispatch an extra ten staff to catch up on the job.

Mission Essential Personnel (MEP), which Corpwatch profiled here, supplies 6,000 translators to the U.S. military, mostly in Afghanistan. The company's costs have not been singled out as questionable or unsupported, but the failure of the government agency to oversee taxpayer money is an indicator of widespread problems and staff shortages at this key military agency.

"How does the government know we're getting our money's worth?" asked Christopher Shays, co-chair of the commission and a former member of Congress from Connecticut, at the July 26 hearing.

"This was a major miss on DCAA's part," Michael Thibault, the other co-chair and a former deputy director of DCAA, told CorpWatch.

DCAA has oversight over half a trillion dollars of taxpayer money every year. It is supposed to constitute the "first line of defense" against corruption when the Pentagon contracts anything from bunker-buster-bombs from Lockheed Martin, to rockets from Boeing, or when it subcontracts military support operations as it did when it paid Halliburton subsidiary, KBR, to hire Sri Lankans to clean toilets in Iraq.

Despite past success - including exposing Halliburton's inability to account for billions of dollars early in the occupation of Iraq - DCAA management has drawn fire in the last two years for giving military contractors a clean bill of health and ignoring serious problems in corporate financial systems spotted by lower ranked staff.

Whistleblowers have charged that instead of actively pursuing waste, fraud, and abuse, the top ranks of DCAA were obsessed with signing off on as many audits as possible in the shortest period of time. DCAA management has also been accused of harassing and intimidating staff who have spoken out. The DCAA estimates that the savings it has made for the taxpayer plummeted from $51 for each dollar spent on staff and overhead in 1984 to just $5 today.

The first shot across DCAA's bow was fired by the Government Accountability Office (GAO), the investigative arm of the U.S. Congress. In a July 2008 report that provoked alarm among politicians, the GAO gave DCAA a failing grade for not complying with government standards on 14 major audits.

"This auditing agency has been exposed as being fundamentally corrupt in the way they issue audits," Democratic Senator Claire McCaskill, a former Missouri state auditor, told her fellow senators in Congress at the time.

Then in September 2009 both the GOA and the Pentagon's inspector general issued critical reports, and the Pentagon, after conducting confidential interviews with 68 DCAA staff, confirmed some allegations of staff harassment.

Founded in 1965 to provide the U.S. Air Force, Army, Navy, and Ordnance Department with uniform oversight of contractors was first headquartered in the now closed Alexandria, Virginia Cameron Station, a cold windowless building fitted with rows of steel gray desks.

Even in the days before computers and modern accounting techniques, its auditors were able to catch corrupt contractors and save millions. To do their jobs, the staff sometimes had to battle their own and Pentagon management who were reluctant to criticize the big contractors.

DCAA expanded quickly. By 1966, it had 3,662 staffers around the country with oversight over $21.5 billion. As the Vietnam War ramped up, the DCAA's "Flying Squad" would fly Huey helicopters to forward bases in the jungle to check up on work done by contractors.

By the end of the 1980s DCAA had more than 6,000 staff and today, with headquarters in Fort Belvoir, Virginia, it has some 300 offices and sub-offices around the world. The agency's staff still get on helicopters -- now Blackhawks and Chinooks -- in Afghanistan, Iraq, and Kuwait to visit forward bases and inspect contractor's books. Although DCAA primarily serves the U.S. military, it also conducts audits for other agencies including the Department of Energy and the National Aeronautics and Space Administration (NASA).

In the last 45 years, DCAA's oversight of contract dollars has expanded more than four-fold (adjusted for inflation) to $501 billion in proposed or claimed contractor costs that required 30,352 audits in 2008.

Not surprisingly the agency staff has struggled to keep up with demand, and as far back as the 1980s, it had a six to seven year backlog to complete audits. This lag had a major impact on payments to military contractors, which were typically paid just 85 percent of costs on delivery of services, with the remaining 15 percent paid out several years later -- only if the auditors were satisfied.

DCAA found an opportunity to change this record of inefficiency in 1993 when Vice-President Al Gore was appointed to head up a commission to "re-invent government" to "work better, cost less, and get results Americans care about." Under the Gore mandate, DCAA Director Bill Reed, ordered sweeping changes in how the agency conducted audits.

The first step was telling auditors to catch up as soon as possible. A then senior DCAA auditor told CorpWatch how that order was implemented: "We basically closed out outstanding audits of procurement dollars by looking the other way."

Next, Reed instructed his staff to focus on performance "metrics."

"To put it bluntly; cheaper, faster, better," former DCAA director April Stephenson would recall later. Multiple layers of supervision and management were created to ensure that staff completed even the most complex of audits in less than 30 days. But tracking time under the new "Defense Management Information System" often took longer than the actual sped-up audit, defeating the whole purpose of making the system work better.

For staffers who were serious about their work, there was only one way to complete the auditing: "Unless I'm willing -- and I have been -- to work on my own time on weekends, I can't finish the audits within the certain hours, and I don't -- and at the end, when my performance gets rated, my supervisor will run through a summary of the audits I completed during the year and how much a percentage I ran over the budget. And if I ran more than 10 percent, I got dinged," said Diem Thi Le, a senior auditor in the Santa Ana office of DCAA in southern California with 20 years of experience at the agency.

Most whistleblowers say that Reed, who ran DCAA from January 1986 to July 2008, bears the bulk of the blame. "[He] went around all the nation, all the DCAA offices, telling us that there was talk in Congress to privatize our agency, and if we don't become a lean and mean machine, we'll lose our jobs," said Thi Le. "Looking back, I think that was a scare tactic, because then we began -- afraid of losing our jobs - we began to accept the metrics. And as you know, once you push it, you can push further and further, because the theory is if you don't do it, you don't meet the metrics, we're going to lose our jobs."

Dozens of auditors who did not meet metrics -- often staff with disabilities who could not work as fast as their more able-bodied colleagues - were forced out.

Conversely auditors who finished quickly got promoted. DCAA whistleblowers say that the system encouraged auditors to ignore contractor faults that slowed audits and caused missed metrics. Big military contractors quickly learned that they could easily pressure DCAA auditors to give them a clean bill of health rather than risk losing a promotion.

By the time Reed retired in 2005, his part of the government had been "re-invented" and DCAA had shrunk to its 1966 staffing level of 3,400 auditors.

The GAO report, the Senate hearing, and the outpouring on Government Executive's website convinced DCAA management that something had to be done. In September 2008, DCAA Director April Stephenson announced what appeared to be radical changes: The agency would scrap 18 of the 19 metrics and shut down Webmetrics, a staff performance management software program.

A new set of 11 new "standards" which included eight measurable "metrics" was announced. Stephenson appointed Karen K. Cash, DCAA's assistant director for operations, to follow up on staff complaints which had been invited via an anonymous website.

Stephenson also sought advice from the Defense Business Board, a Pentagon advisory board set up by Donald Rumsfeld. The board, composed of senior executives from major military contractors quickly came up with several vague suggestions such as creating a new business plan, centralizing management, and hiring an ombudsperson.

Last November, the Pentagon decided that Stephenson wasn't the right person to overhaul the agency. She was re-assigned and Patrick Fitzgerald, the former director of the U.S. Army Audit Agency, took over.

In fiscal 2008, the average time to complete a "contractor pricing review" was 28 days. Today the same job takes 72 days. "Some of our audits take longer because we are doing a more comprehensive job," Fitzgerald told Government Executive magazine in July. "If there are other factors that are causing us to take longer, we need to do a deep dive on those and try to figure out how mitigate or to alleviate them."

As a result DCAA says it will no longer be able to keep up with the 2008 metrics -- 30,000 audits covering more than $500 billion in proposed or claimed contractor costs. To catch up on the missed audits, like the one for MEP, Fitzgerald says that DCAA has hired 500 new auditors and will add 1,000 more in the next four years.

"We are also working to prioritize audit workload and make sure that high-risk audits are identified and completed in a timely manner," a Pentagon spokesperson told CorpWatch, noting that the agency was currently working to create a new strategic plan, and will re-assess the new performance measures introduced in 2008.