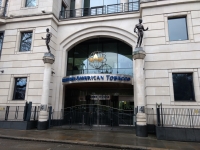 A cigarette factory with the capacity to produce three billion Dunhill cigarettes per year is expected to open up in Mali this year, the product of a partnership between British American Tobacco (BAT) and the Malian government, that the company claims will create as many as 200 permanent jobs.

However, not only are Dunhill cigarettes already widely available in the country, they are being smuggled by the truck load to rebel-held areas in Mali, as well as further north to countries like Algeria, Libya and Sudan, where they are helping finance a bloody conflict that has displaced 2 million people since 2012, according to a new investigation undertaken by journalists at the Organized Crime and Corruption Reporting Project (OCCRP).

The in-depth expose of the smuggling of cigarettes, which draws extensively from internal BAT documents supplied by whistleblowers, suggests that the company was not only aware of the smuggling but even took advantage of it.

“Mali was such an important market that BAT undertook a two-pronged strategy. The company set out to secure a ‘license to operate’ by schmoozing government officials,” Andy Rowell, a senior research fellow at the University of Bath Tobacco Control Research Group, told OCCRP. “At the same time, the company sought to ‘delay and disrupt’ the operations of the opposition (rival tobacco companies).”

BAT has a long history in Africa, where it first set up shop in 1907. Today, BAT sells cigarettes in 38 African countries and holds a 90 percent share of the market in eleven African countries ranging from Sierra Leone to Kenya to South Africa. (Action on Smoking and Health, 2017).

Investigative journalist Duncan Campbell says that the company has been involved in smuggling for decades. “The deliberate smuggling of BAT products evolved from an ad hoc activity into an organized and centrally managed system of lawbreaking,” he wrote as part of testimony submitted to the UK parliament in 2000. “This was overseen at the highest levels within the United Kingdom headquarters organization.”

By 1990, as anti-smoking campaigns started to gather strength in the West, the company was already touting opportunities elsewhere. “We should not be depressed simply because the total free world market appears to be declining. Within the total market, there are areas of strong growth; particularly in Asia and Africa,” a BAT document made available to the public stated. “It is an exciting prospect.”

Notably, an internal BAT document from 2007, obtained by OCCRP, described the markets of Ghana and Mali as “crown jewels.”

In several leaked documents, BAT explicitly outlined its strategy in Mali, emphasizing the opportunities that trading in a war zone offers. “Mali, as the principal market which has the highest volume of illicit trade, is where we have the most to gain by increasing contestable market space,” wrote an unidentified individual in a 2009 briefing for BAT legal and security officials.”

In 2013, another internal BAT document displayed company distribution points on a map of Mali with the following caption: “As we know, in a dark market, the war is won on the battlefield with no pity for our competitors and a massive and well executed trade marketing and distribution to be seen and reachable everywhere.”

Yet another internal BAT document from 2015 sets out a plan called Desert Storm to increase its business in regions of Mali, that the company noted, were suffering from “extremist insurgencies.”

This BAT cigarette trade begins in Heidelburg, South Africa, where the company makes ‘clean-labeled’ Dunhill cigarettes. These are legally shipped to Mali where BAT has had a decades-long partnership with SONATAM, the state tobacco distribution company, to sell its cigarettes.

Sory Coulibaly, a former sales executive for a BAT distributor in Mali, told OCCRP that BAT provides Malian customs agents and police with new cars, motorcycles and small patrol boats, for the ostensible purpose of cracking down on illegal cigarettes sold by BAT’s competitors.

Instead, corrupt customs officials team up with anti-government rebels to smuggle these cigarettes north where they can be sold for a tidy profit. This cash pays for militias who are fighting a bloody conflict in the northern region of Mali and beyond across a wide swathe of West Africa.

For example, fighting regularly occurs between Tuareg liberation forces, Al-Qaeda and Islamic State offshoots, local militias and the military, ever since the National Movement for the Liberation of Azawad (MNLA) took over northern Mali in January 2012.

In 2011, the year prior to the outbreak of the conflict, BAT estimated Mali’s cigarette demand at 1.9 billion cigarettes per year. Despite the fact that World Bank data shows a slight decline in the percentage of Malian adults who smoke from 12.5 percent in 2010 to 12 percent in 2018, BAT’s internal estimates projected that demand in Mali would double to 3.8 billion cigarettes by 2017.

Today OCCRP estimates that Mali is oversupplied with 4.7 billion surplus cigarettes per year, according to trade data, leaked BAT documents and interviews with officials, experts, former BAT employees, experts, and the militias themselves.

In response to the OCCRP’s report on cigarette smuggling in Mali, BAT issued a press release that stated: “At BAT, we have established anti-illicit trade teams operating at global and local levels. We also have robust policies and procedures in place to fight this issue and fully support regulators, governments and international organizations in seeking to eliminate all forms of illicit trade”

Yet, this statement does not square with a long-established pattern of BAT working to promote “duty not paid” (DNP) cigarette sales (a euphemism for cigarette smuggling) around the world, a practice that was revealed in a series of internal BAT memos that the company was forced to release to the state of Minnesota in the 1990s.

"Illegal Pathways to Illegal Profits: The Big Cigarette Companies and International Smuggling,” a 2003 report by the Campaign for Tobacco-Free Kids, delved into these memos to show the numerous ways in which BAT condoned or supported the smuggling of company products.

Such revelations have occasionally led to BAT being held to account for its complicity in cigarette smuggling. In 2010, the company paid €134 million to the European Commission to settle smuggling-related charges. And in 2014, it was fined £650,000 for oversupplying cigarettes to Belgium that were smuggled back into the UK.