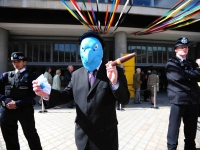 A record Â£290 million ($450 million) fine for fixing rates at which banks lend to each other has been levied on Barclays bank in the UK by U.S. and U.K. authorities. The scandal has forced Bob Diamond, the Barclays CEO who had ignored activist protests over his sky-high $28 million salary, to resign on Tuesday.

Perhaps even more importantly, the scandal has shone a light into how banks set - and manipulate - rates at which $360 trillion in international deposits are loaned out every day. While most of these loans are overnight transfers between banks, they affect the price of consumer loans like mortgages, car loans and credit card loans.

Minos Zombanakis, a Greek banker who worked at Manufacturers Hanover Trust, invented a system in 1969 to estimate "market" rates for lending money when he was asked to work on a $80 million loan to Iran. "We had to fix a rate, so I called up all the banks and asked them to send to me by 11 a.m. their cost of money," he told the New York Times. "We got the rates, I made an average of them all and I named it the London interbank offer rate."

In subsequent years, the British Bankers Association took on the daily task of setting "LIBOR" rates for as many as 150 different kinds of loans. These BBA-determined rates are now considered the global benchmark says Donald MacKenzie, a sociologist at the University of Edinburgh, who wrote a fascinating article in 2008 about how they are set.

"This can now be done on-screen, but - especially if large sums are involved or market conditions are tricky and changing rapidly - it's often better to use the 'voicebox'. This is a combination of microphone, speaker and switches that instantly connects each broker by a dedicated phone line to each of his clients in banks' dealing rooms."

"A broker needs to pass information to his clients as well as to receive it: that's a major part of what they want from him, and a good reason to use the voicebox rather than the screen. The brokers' code of conduct prohibits passing on private knowledge of what a named bank is trying to do (unless a client is about to borrow from it or lend to it), but that restriction leaves plenty of room for brokers to tell traders what has just happened and to convey the 'feel' of the market."

What Barclays brokers did was to claim that they could borrow money more cheaply than anyone else to mask their financial problems. "This is a big deal," writes Dylan Matthews in the Washington Post. "Remember that JP Morgan scandal a few months back? That was mostly JP Morgan hurting itself. The LIBOR scandal was Barclay's making money by hurting you."

Matthews goes on to add: "The direct effect for consumers here was to make loans cheaper, but the indirect effect, or the intended one at least, was to lessen chances of government action against the banks."

For example, one trader is reported to have told a Barclays employee: "Coffees will be coming your way either way, just to say thank you for your help in the past few weeks". The reply came back: "Done, for you big boy."

Public speculation that the rates were being fixed date back to at least 2007. Libor rates could "be manipulated if contributor banks collude or if a sufficient number change their behaviour" concluded a 2008 study by the Bank for International Settlements. So did a paper published on the Social Science Research Network which found evidence of "questionable patterns."

Heads are continuing to roll. Marcus Agius, the chairman of the British Bankers' Association, resigned Monday over the scandal. By coincidence, or perhaps not, Agius was also chairman of Barclays.

But that may not be enough, say some. "(T)oday's leaders must be for finance but against banking behemoths. The instruments of finance, from risk models to derivatives, are useful when used responsibly," concludes Sebastian Mallaby in the Financial Times. "But the structure of modern finance - vast institutions that borrow cheaply because taxpayers are on the hook to save them - is an abomination that must stop."