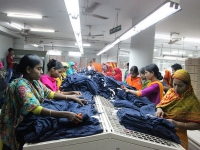 The garment industry in Bangladesh employs some four million people and contributes 82 percent of country's export income - a total of $28.1 billion last year, up 33 percent from three years prior. Despite the boom in business, Mark Anner, an associate professor at Pennsylvania State University, estimates that the real term price of a pair of cotton trousers made for export has dropped 9.3 percent over the same period of time.

"Economic growth has increased but workers’ rights are not improving. The economy could be growing even faster but this is holding it back," Nazma Akter, founder of the Awaj union for women garment makers, told the Financial Times newspaper.

Not surprisingly anger has been bubbling up the workers who have been struggling to make ends meet on wages that begin at 5,300 taka ($66 a month). A group of workers went on strike on December 11 at the Windy Apparels Limited factory in the Ashulia industrial area, which houses some 350 factories. Another 25 factories quickly followed suit culminating in some 150,000 workers walking off work to support the demands.

Instead the Bangladeshi government sent in the police, the Rapid Action Battalion and the Border Guard Bangladesh to crack down and detain the leaders. "They used Special Powers Act to detain union leaders and workers," Babul Akhter, the head of the Bangladesh Garment and Industrial Workers Federation told the Guardian newspaper. "Up to 3,500 workers have been sacked and 50 leaders have gone into hiding."

On December 26th, the factories were re-opened but management singled out a number of strike organizers, who were suspended, fired or arrested. Police also jailed Nazmul Huda, a local reporter for Ekushey television, for allegedly inciting the unrest.

One of the men arrested is Jahangir Alam. "We live hand to mouth, waiting for the paycheck at the end of the month," Jhorna Begum, his wife, told the New York Times. "I don’t know when he’ll get out — how am I supposed to run my family without him?"

The government reaction to the protests has been condemned by international observers. "Such situations damage the industry’s reputation and confidence levels, which we, together with the government and social partners, are all working so hard to bolster," Rob Wayss, the executive director of the Accord on Fire and Building Safety in Bangladesh, wrote in a strongly worded letter to Sheikh Hasina, the Bangladeshi prime minister.

Meanwhile an industry spokesman blames the cut throat competition among the factories for the low wages. "Retailers pay around $5 for a piece of denim clothing that would sell in the west for $60,” Mohammed Nasir, vice-president at the Bangladesh Garment Manufacturers and Exporters Association, told the Financial Times. "The buyers go to each factory and get a detailed quote for the work. Then they take the cheapest deal offered for each part of the work and demand that factories meet that overall price. Factories are desperate, so they agree."

Low wages are not the only problem in Bangladesh. Many of the factories routinely violate safety codes. In April 2013, the eight-storey Rana Plaza factory collapsed killing 1,134 people. In the wake of the disaster, Bangladeshi factory owners agreed to undergo safety audits and inspections. (Huda, the reporter who was arrested, was the only journalist to have pointed out the safety problems in the building before it collapsed.)